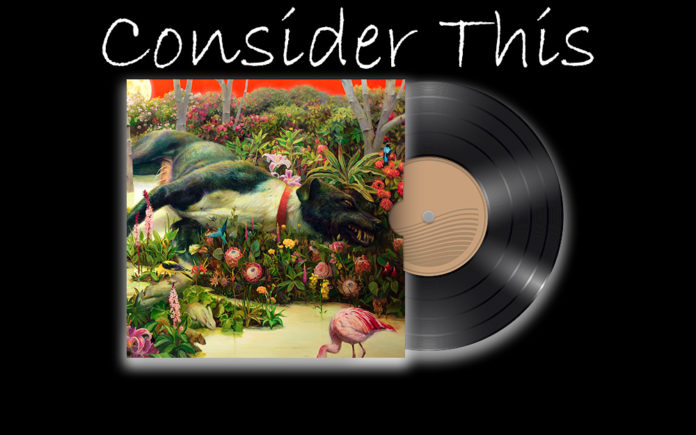 For the last decade the Rival Sons has been the best-kept Secret in Rock N’ Roll. That’s about to change with the release of their new record, “Feral Roots.”

Long Beach musicians Scott Holiday (guitar), Michael Miley (drums) and Robin Everhart cycled through a series of bands over the years before they formed Black Summer Crush with ex-Oleander vocalist, Thomas Flowers. Although they toured relentlessly, the four-piece never really coalesced. They amicably parted ways with Flowers and began hunting for a new vocalist.

Concurrently, Jay Buchanan was also making a name for himself in Long Beach, first as a singer/songwriter and then as front-man for his band, Buchanan. His sound was a heady brew of Blues, Folk and Jazz, so he was skeptical about joining a straight up, Rock N’ Roll band. But he got together to jam with the guys and the chemistry was instantaneous.

As Rival Sons, the band quickly added Jay’s vocals to tracks they had already recorded for their first long-player. Before The Fire was self-released in June 2009. The band hit the ground running, earning a reputation as an incendiary live act. A year later they recorded an eponymous six song EP and the cognoscenti began to take notice. The venerable British Metal label, Earache, were also paying attention and the Sons became the first Rock N’ Roll band Earache signed.

The Sons had already established a relationship with producer Dave Cobb (Shooter Jennings, Jamey Johnson), who had recently relocated from Los Angeles to Nashville. So, they retreated to his studio to write and record their Earache debut in an astounding 20 days.

Pressure & Time arrived in 2011 and it felt like a Rock N’ Roll revelation. Indelible melodies were powered by economical arrangements, and the lyrics were by turns, playful, clever, thought-provoking and erudite. Jay’s melismatic vocals were augmented by Scott’s protean pyrotechnics, along with Miley and Robin’s tripwire time-keeping. Mind-melding cover art from iconic Hipgnosis founder Strom Thorgerson was another signal that the Rock N’ Roll establishment recognized Rival Sons as kindred spirits. That bond was strengthened when the boys began opening for superstars like AC/DC, Alice Cooper and Kiss.

Although they were in the midst of an extended European tour, in the Spring of 2012 the band hunkered down with Dave Cobb in Nashville and once again wrote and recorded an entire record in under 20 days. Head Down arrived in Europe that September and hit the U.S. six months later in March, 2013. It was as ambitious and expansive as Pressure & Time was pithy and succinct. It also solidified the band’s standing as the new Golden Gods of Rock. Asked by Rolling Stone to name his favorite new music, Jimmy Page had one answer: Rival Sons.

By this time, the Sons were on the road more than off and that began to take its toll on Robin Everhart. Unfortunately, this was the most efficient way to break the band in the 21st century. Europe welcomed them with open arms, and a passionate fan base was expanding in America but radio was still slow to catch on. Robin decided to leave the band, and luckily, their old pal Dave Beste (formerly of Rocco De Lucca And The Burden), was able to step in and complete the tour. He officially joined the band when they returned to the studio with Dave Cobb to record Great Western Valkyrie.

Released in 2014, GVW raised the band’s profile considerably. Their fourth long-player split the difference between the crisp attack of P&T and eloquent sprawl of Head Down. They appeared on David Letterman’s “Late Show” and “Later With Jools Holland.” Back on the road they headlined larger venues in the U.S. and Europe and opened for Aerosmith, Deep Purple and Lenny Kravitz. They were also feted at festivals like Rock Am Ring, Isle Of Wight and Glastonbury.

“Classic Rock” magazine had championed the Sons since the beginning. In early 2015, the publication was holding an awards show in Los Angeles, they asked the band to perform an acoustic two-song set. Ozzy and Sharon Osbourne took it all in from the front row and were so impressed they asked the guys to be the only opening act on Black Sabbath’s final world tour. This was an enormous opportunity, but it meant abbreviating a bit of their commitment to Deep Purple, which allowed them to quickly record a new effort with Dave Cobb.

For their fifth album they had quite a lot of pressure, but very little time. As usual, they devised eight new tracks on the spot, managing to capture each song in one or two takes. Hollow Bones showcased their quicksilver brilliance, and the Sabbath tour won new fans. But their record label still hadn’t managed to break the band in America. It was time for a change.

Outside of his work with Rival Sons, Dave Cobb had really begun to make a name for himself as a producer. He has been an integral part of award winning records for Sturgill Simpson, Chris Stapleton, Brandi Carlile, Jason Isbell and Lori McKenna. As a result, he started his own label, Low Country Sound, distributed by Atlantic Records. Rival Sons was the first band signed to the label. Following a couple of high-profile gigs in Europe opening for the Rolling Stones and the reconstituted Guns N’ Roses,  the guys decamped to Nashville’s famed RCA Studio A on Music Row as well as the historic Muscle Shoals Sound Studio in Sheffield, Alabama to make their sixth record, Feral Roots.

The record opens with a three-pronged attack: “Do Your Worst,” “Sugar On The Bone” and “Back In The Woods.” The first two offer sin, salvation and temporal temptation. On “Do Your Worst,” shards of Fuzz-crusted guitars hurtle out of the speakers, closely followed by a walloping backbeat, spidery bass lines and pounding piano. Jay’s stentorian howl signals danger, as a stranger approaches. Recognizing a huckster and a charlatan, who will “blind your eye, steal your tongue, he’ll take you when you’re old but he likes ‘em young.” (Hmm, does he have an orange complexion, whipped meringue hair, plus a predilection for fast food?) Before one can ponder those similarities, the irresistible shout-out-loud chorus hits like a punch to the solar plexus and Scott unleashes a stratospheric guitar solo.

“Sugar…” weds a chunky, Afro-Cuban beat to distorto guitar, prowling bass lines and spooky keys. As the melody achieves lift-off, it locks into a Soul-tastic boogaloo.  Jay waxes rhapsodic about carnal knowledge and the power of Rock N’ Roll; “Dance the way you want to, shake that sugar right on the bone/Breathing heavy on the telephone, you want that Rock N’ Roll.. a cure for what’s ailing the world, you want that Rock N’ Roll.” Scott’s bone-shaker solo shivers and quakes on the break like a fever.

The primordial crunch of “Back In The Woods” is anchored by Miley’s pile-driving drums. The opening salvo is quickly eclipsed by serrated guitar riffs, rumbling bass and shifting time signatures. Jay’s sun-kissed yowl leaps tall buildings in a single bound as he slips into the skin of a wily outlaw, surviving by his wits in the wild; “The buckshot whipping right past my ear, that’s when I lose him in the fog/The bird’s gonna let me know if he’s near and that’s when I hide out in a hollowed log.” Scott executes a molten solo guaranteed to melt a few faces.

Rival Sons has never been reluctant to explore uncharted territory and that spirit of adventure asserts itself on four tracks. “Stood By Me” offers a satisfying slab of Shagadelic Soul. Scattershot rhythm guitar collides with Rattlesnake-shake percussion and Scott’s cascading power chords. Jay crests over the top, his lyrics share a heartfelt encomium to a loyal friend who threw out an emotional lifeline; “Yeah, I swam out so far that you couldn’t see my head on the water, yeah, that’s when you jumped in to swim twice that and further/Good friends are hard to find, sure enough you’re one of mine.” Scott unspools a squally solo that gives the song a twitchy frisson.

“Imperial Joy” is powered by a hopscotch rhythm, rubbery bass and growling guitar that occasionally snaps, crackles and pops. Over a cross-cut melody, Jay only slightly regrets trading sex for sleep. The consequence for concupiscence means he must “crawl across another long Monday.” Jangly acoustic riffs bookend the chorus before Scott  rips a bramble-thick  solo on the break.

The action slows on both “Look Away” and “Feral Roots.” The intro of the former features acoustic instrumentation that hinges on rippling arpeggios, lilting keys and a tabla beat. The modal melody downshifts suddenly, as sugary electric guitar and a bludgeoning beat take control. Jay lashes out with a brittle indictment of our apathetic culture; “You watch the distribution, of mass confusion, spread by the institution, find your inclusion/Of you in your own delusion, instead of thinking you’re the solution.” Dave Beste’s bass ricochets through the mix as Miley rides his toms, Scott’s incendiary solo allows for little equivocation.

The latter seems to celebrate Jay’s return to more rural surroundings. As a kid he lived on a dirt road in the woods of California, but a career in music necessitated a move to the big city. Recently, he relocated to Franklin, Tennessee, and the title track reflects this new chapter. Filigreed fretwork lattices over kinetic percussion. Jay’s airy vocals somersault over the lush melody, sticking the landing. The lyrics consecrate the power of Mother Earth. As the tempo accelerates, sustained electric riffs give the song a serpentine grace. Scott’s keening solo powers down on the instrumental coda.

Other interesting tracks include the sleek and shimmery search for spiritual salvation on “All Directions.” Then there’s stuttering menace of “Too Bad,” wherein snake-charmer riff-age is matched by bulldozer beat. Jay offers a withering assessment of a former flame, noting, “We go together like a hand and gun,” before completely dismissing her; “You miss me so much, well, that’s too bad.” On “The End Of Forever,” bloopy, synthesized percussion is supplanted by rapid-fire bursts of staccato guitar. The lyrics wallow in the mire of heart break, even as Jay’s vocals soar above the calibrated chaos of the arrangement.

The Sons received some vocal assists from Kristen Rogers and Whitney Coleman. Keyboard colors were provided by beardy tour-mate, Todd Ogren Brooks. Dave Cobb added percussion and rhythm guitar. For the first time ever, the band was allowed the luxury of crafting an album. Jay and Scott holed up in a cabin in Hohenwald, Tennessee, bouncing ideas off each other and returning to the studio with a completed batch of songs. Still, the recording process remained spontaneous and improvisational. Consequently, Feral Roots manages to add some nuance and texture, but remains rough around the edges.

For nearly a decade this band has evinced a combustible chemistry that is positively thrilling.

Rival Sons make full-throttle Rock N’ Roll, full of twists and switchbacks and hairpin turns. Their music makes your heart pound and your blood sing, as the hairs on the back of your neck stand at full attention. Feral Roots is bigger, louder, faster. What more could you ask for?