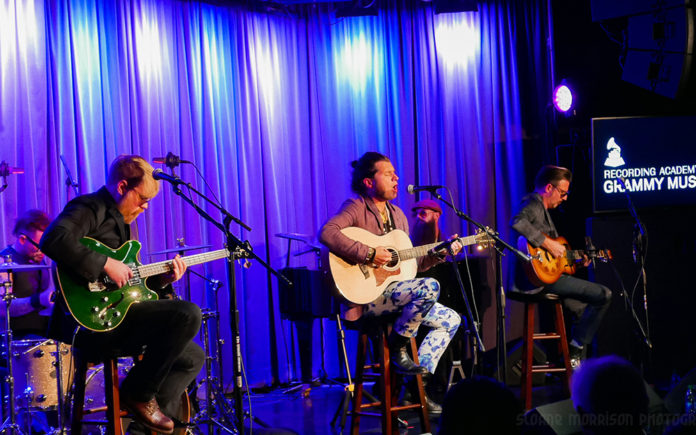 Live at The Wiltern And The Grammy Museum

If one band is destined to bring the swagger of Rock N’ Roll back, it’s the Rival Sons. These guys have been at it for 10 years and show no signs of slowing down. Recently, they played a headlining hometown gig at the Wiltern in Los Angeles and were feted the following night at the Grammy Museum.

The critical acclaim was instantaneous and Classic Rock artists recognized them as kindred spirits. The band quickly began opening for legends like AC/DC, Aerosmith, Kiss, Lenny Kravitz and Deep Purple.

After five albums and an EP released via Earache, as well as a career-defining turn as the only opening act for Black Sabbath’s final World tour, the Sons signed with the venerable U.S. label, Atlantic. Not long after, they were invited to open for Guns N’ Roses and the Rolling Stones.

January saw the release of Feral Roots, their first long-player via Atlantic, and the first single, “Do Your Worst,” peaked at #1 on Billboard’s Mainstream Rock chart. As usual, Rival Sons hit the road, satisfying their intensely loyal disciples in Europe and Great Britain, before returning to the states to reward their ever-growing American fan base. These guys are true road dogs and have spent most of 2019 playing live. They just finished a series of dates co-headlining with Stone Temple Pilots. The opportunity to receive top billing at the Wiltern felt like a true milestone for guys who have been attending shows at the historic Art Deco venue (which began life in the 1930s as a vaudeville theater), for decades.

Following satisfying opening sets from Delta Shade, which is fronted by Jay’s younger brother, Chad Buchanan, as well as L.A.’s own Warbly Jets, the Sons hit the stage to a thunderous ovation as they ripped into a blistering version of End Of Forever from the new album. Buzz-saw riffs skittered and quaked over pinwheeling bass, a blitzkrieg beat and a wash of keys. Jay’s sun-kissed yowl jumped into the fray and felt like the whole venue was riding shotgun down an avalanche.

The audience was primed for a night of non-stop, full-throttle Rock N’ Roll, and the band didn’t disappoint, immediately segueing into “Secret.” Gritty and Glam-tastic, it was anchored by Miley’s locomotive beat and Dave’s tensile bass. Jay’s vibe is salacious and seductive until the band powered down on the break.

In a live setting, he begins davening, offering a lascivious liturgy until he relinquishes the spotlight to Scott, who unspools a series of chunky chords before catapulting into the stratosphere.

Before any collective breath was caught, Scott unleashed the signature riff from their breakthrough single, “Pressure And Time.” From the pit to the mezzanine, the crowd was on their feet. The lyrics limn the sacrifice and struggle it takes to create real art; “Take me out of this mudslide of never enough, let me eat the fruit right off of the trees/When God gets his rest because six days are just too tough, I can only pray he doesn’t forget about me.” Jay’s level of intensity here is matched by Scott’s incendiary licks, Dave’s funky bass and Miley’s walloping big beat. Offering his awkward/endearing dance moves on the break, Jay included the crowd on the infectious “giving it up” refrain.

The band took a beat and Jay asked if they could play some deep cuts, quickly launching into “Sleepwalker” and “My Nature.” The former dates back to the band’s 2010 self-titled EP. A blast of raw energy, Jay effortlessly slips into the skin of guy captivated and cuckolded by a stripper. Added to the muscular mix is Jay’s caterwauling Blues harp. The latter is the true Unicorn, originally released as a bonus track on the tour edition of 2014’s “Great Western Valkyrie” (GWV), it has been performed live maybe one other time. A soulful ballad that builds to a compelling crescendo, it’s one of the band’s few straight-ahead love songs. Recognizing the opening notes, the crowd erupted. In between these atypical tracks, they whipped up a ferocious version of “Tied Up,” from their 2016 effort, Hollow Bones.

A thunderous drum solo from Miley signaled that the show was about to turn a corner. Jay, Scott, Dave and beardy tour-mate Todd Ogren Brooks ceded the stage to (in the immortal words of James Brown), “give the drummer some.” When everyone returned, Jay picked up an acoustic guitar and the band launched into an epic rendition of “Look Away.” Initially eschewing drum sticks, Miley used his hands to pound out a tabla-flavored tattoo on his kit. Scott and Jay locked into an extended jam, trading rhythm licks and concentric modal riffs over Todd’s organ colors and Dave’s synchronistic bass. Deft lyrics offer a brittle excoriation regarding this country’s collective shrug; “If it’s someone else’s problem, it’s somebody else’s pain.” Apathy and antipathy are the real enemies. 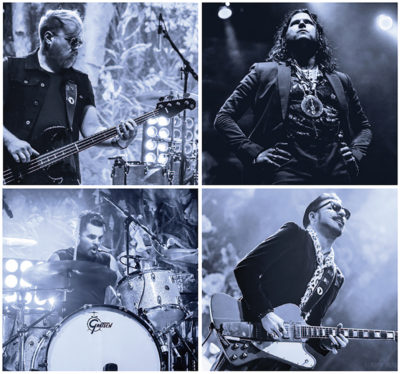 Jay Buchanan consistently commits 100% to any performance. That goes for scorchers like “Too Bad” or more quiescent cuts like “Where I’ve Been.” A protean commentary on the power of redemption, “Where…” originally appeared on GWV and has been out of the live rotation for a couple years. Jay’s mien is measured and subdued, as he reveals a saga of addiction and regret. The minor key melody in ¾ time is equally hushed until Scott’s keening and cathartic solo brings it all home.

The evening’s showstopping centerpiece was magisterial presentation of the song “Feral Roots.” As with “Look Away,” Jay played some rhythm guitar and Scott strapped on a Kauer Super Chief double-neck for an extended intro. Pastoral chords latticed over a ticklish beat, as lyrics paid homage to Jay’s rural Upbringing, offering this philosophical nugget; “If the truth can be written, the truth can be hid, those words are commanding you/Though your body may grow old in your mind you must remain a kid.” Jay and Scott executed a magical pas de deux on the extended break with symbiotic grace. As Dave, Miley and Todd provided ballast, trippy wah-wah and slide guitar notes coalesced.

The balance of the show featured two more GWV tracks, the searing heaviosity of “Open My Eyes” which is propelled by a bludgeoning beat, and boomerang bass. Scott’s electric riff-age, that shapeshifts from searing to sugary, as Jay searches for spiritual salvation. Conversely, “Electric Man” wallows on the wanton side. Gnarled, sand-blasted riffs careen over spooky keys, thrumming bass and pile-driving rhythms. Jay’s vision quest has taken a concupiscent turn and his vocals leap tall buildings in a single bound, switching between a war cry and a yodel.

The final two songs, both from Feral Roots, offered something of a yin yang juxtaposition. The sanctified stomp of “Shooting Stars” is shot-through with optimism, providing an aural panacea in these fractious times. Over a caroming back-beat and stinging guitar, Jay proposes love as an alternative to hate, faith over doubt and dancing instead of marching. (Recently, a South Carolina school has adopted this song as an anthem, with the band’s blessing). Again, the capacity crowd was on their feet, aiding Jay with the “whoa-oh-oh” call and response. “Do Your Worst” is a little more cynical. Scott’s Fuzz-crusted riffs are wed to prowling bass lines, pounding piano and a primordial groove. Live, the instrumentation feels barbed and brutal, Jay’s lyrics become even more urgent and foreboding, his pliant vocals signaling danger. The audience was left on a knife’s edge.

Happily, the Sons quickly returned for an encore, first offering up the sunny encomium “Face Of Light.” Sun-dappled guitar layered over a tumbling backbeat and shimmering keys as Jay’s melismatic vocals crested over the top. He encouraged the audience to sing along until the break when Scott’s guitar and Jay’s voice intertwined improvising a (mostly) wordless call and response. As his voice hit the breaking point the rest of the band rejoined for a cataclysmic denouement. The crowd was back on their feet for an anthemic version of “Keep On Swinging,” the only number played off of 2012’s Head Down record. 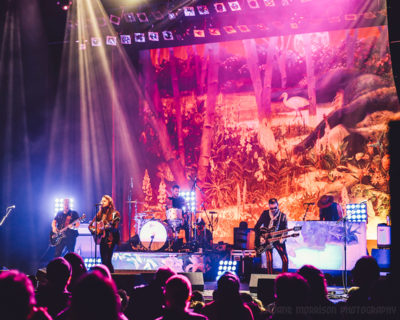 Here cross-cut riffs collided with wily bass runs and a rattle-trap beat. Jay’s boxing metaphor brilliantly conveys this band’s protean work ethic; “Where there’s a will, there’s a way, I work hard at the end of the day, the Lord helps those who help themselves/Hey, hey, I keep my head down, but I keep on swingin’.” Pivoting from a whipsaw guitar solo to a pummeling salvo on Miley’s kit, Jay’s final farewell of “Los Angeles we Loooooooooove you” left the audience sweaty, spent and satisfied.

The following night, 200 lucky fans headed downtown to the Grammy Museum for a more intimate evening with the Rival Sons. For the first hour, Jay, Scott, Miley and Dave, along with Todd Ogren Brooks took turns answering thought-provoking questions from moderator, Scott Goldman.

Questions ran the gamut from the band’s recording process, which is fresh and spontaneous to disconnecting from technology. They discussed their “Grammy Whisperer” producer, Dave Cobb, and making their last record, Feral Roots in the legendary Studio A at the RCA facilities in Nashville, as well as Muscle Shoals Sound Studio in Alabama.

When asked what their earliest musical memory was, Jay’s was his mother, singing to him as a baby. Dave quipped that Jay should have gone last as it made the rest of the band look bad. Still, they reeled off influential moments like Scott seeing a VHS tape of Led Zep’s epochal “Song Remains The Same,” Miley experiencing Pink Floyd’s “The Wall” with his dad, Todd discovering Glenn Gould and Van Halen. Weirdest of all was Dave’s childhood dream that he would grow up to become a famous female opera singer!

The band’s four song set mostly concentrated on songs from the new record. A sinewy version of “Too Bad” was stripped down to the essentials. Alternately bitter, Bluesy and courtly, it featured stately piano runs from Todd, Jay’s gritty vocals and acoustic guitar, rubbery bass lines, subdued percussion and Scott deftly pivoting between a metal-bodied National Resonator and a 12-string Guild acoustic.

“Do Your Worst” was sonically reshaped by all the guys pitching in on hushed Gospel-flavored harmonies. The menace and malice of the lyrics was buttressed by a martial cadence, jagged bass lines and a slashing slide guitar solo. Jay noted that “Where I’ve Been” spoke to the power of rebounding joy. A full-throated rendition followed, anchored by rippling 12-string arpeggios, sparkling piano accents and wiry bass all set to ¾ Waltz time.

Finally, the evening closed with version of “Shooting Stars” that managed to be equal parts earthbound and ethereal. Wordless harmonies gave way to a kick-drum beat, jubilant piano and spidery bass lines. Scott’s solos shapeshifted from cascading arpeggios to coruscated bottleneck runs, and Jay’s mien swerved from savant to savior to soothsayer.

Back when it all began, Rival Sons vowed to “Burn Down Los Angeles.” This week, they had a city at their feet. Their electricity, authenticity and quicksilver grace shone throughout both nights. The guys took a bit of a victory lap, but really, it was a hometown homecoming.