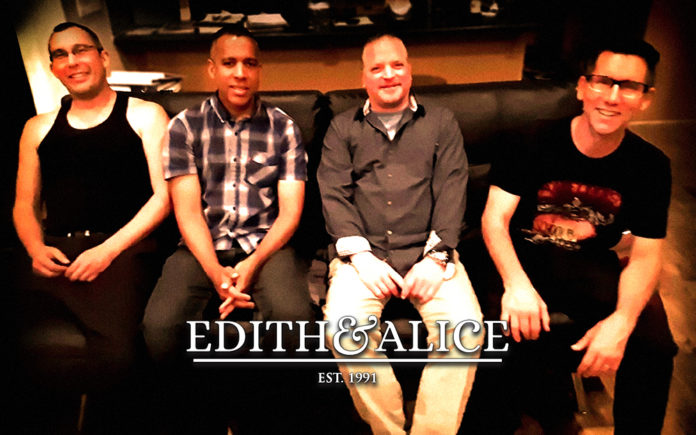 Imagine being in a band in the early 90’s, meeting Doc Brown and being swept into a DeLorean only to have the calendar set to October 19, 2019. This is a true story loosely based on a fictional portrait that traces the lives of Teddy Roosevelt’s two wives, Alice Lee and Edith Carow, but not in that order and with an abundance of Rock and Roll. That band is Edith & Alice. Below is an interview with two of its members who had to be brought up to speed with current events and break the news that Donald Trump is our President.

CVW: First of all, where does the name Edith & Alice come from?

Ellis: “Back in ’91, we were about to play our 3rd show ever at Natasha Allas’ house and we still hadn’t given any thought to a band name. At rehearsal I pulled a random book off the shelf behind me and we decided whatever the title of the book is that will be our name. The book’s title was Alice & Edith, a biographical novel of the two wives of Theodore Roosevelt, quite a bit to put on a flyer. When we got to the show Max asked me, ‘What was that book called?’ I said, ‘I think it was called Edith & Alice’ and once again we never gave any thought to another band name.”

CVW: Your last show was a 1994 house party. You played three songs before it was busted by the cops. What are your memories of those times?

Ellis: “So many great bands back then…Unsound, Nuthouse, Yawning Man…and some group called Kiosk or Krampus? KYUSS…that was it! And just like Scott Reeder proclaimed to Riki Rachtman, ‘There were no clubs in the desert.’ Every gig was usually in somebody’s living room or up on a sandy hill in the middle of nowhere, which is now a significant part of desert lore. I also remember James ‘Opie’ Boren always yelling at us to play faster. On a side-note, the owner of the home we were playing at in ’94  ended up buying the house next door in 2007 and evicted the guy that called the cops on our party. Oh sweet revenge!”

Dunbar: “I started playing in bands at age 15, (Sterling Shot Gun w/Rob), and at the time there was nowhere to play and being underage made it almost impossible. Out of that reality though came the famous desert DIY ethos. At the same time there may not have been sanctioned places to play, there were many unconventional spots; backyards, garages, The Nude Bowl/Colony, The Vineyard and a rock formation in Sky Valley. A carpet for the drums, a light, a generator, a keg, and voilà, 200 kids would show up!”

CVW: How did E&A initially form?

Dunbar: “I was playing guitar in Abraxas with Max and Rob in 1990 during high school. We wanted to make a change on drums and have Rob move to playing the kit versus percussion. The other two members didn’t find this interesting and quit. We had to find a bass player and I think Max asked Charlie to join having previously played together in Asphalt Jungle.” 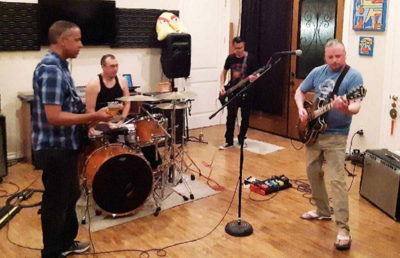 Ellis: “In 1988 I formed Asphalt Jungle, after the Marilyn Monroe film, with myself on vocals and Max on lead guitar. After I left they continued on, adding Rob on percussion, Damon on 2nd guitar and Max taking over the singing, and changing the name to Abraxas, after the Santana album. Around late 1990 their drummer and bassist departed. Then, by chance, I ran into Max at yet another house party and his words to me were, ‘Come to practice Monday… you are playing bass in our band’, which ultimately became E&A. (Yes, as you know…after the book by ALMOST the same name). I also recall us sort of briefly having a back-up singer then, but I honestly don’t recall his name.”

CVW: Tell us about the band members?

Ellis: “There’s myself on bass guitar…but to make up for that, on rhythm guitar we have the lovable and always easygoing Damon Dunbar. With a background in film and video production, I guess you could say Damon is also our tech guy as well…without him there would probably have never been any audio or video of E&A to look back on. Our frontman is Max Clough. I’ve known him since 11th grade P.E. class. He’s the principal songwriter, lead vocalist and lead guitarist, you know a real slouch and of course, the great Rob Peterson on drums. His resume speaks volumes, Groovalopacus, You Know Who, The Ghost Notes, even a brief stint with John Summers and myself in Pig Pen, no doubt the highlight of any drummer’s career.”

CVW: What was it like getting back to rehearsals after 25 years with E&A?

Ellis: “Like riding a bike, granted it was one of those old time Penny Farthing bicycles with the high front wheel, but riding a bicycle nonetheless. In the early 90’s we were all good friends and hung out regularly. All that camaraderie and over-the-top silliness came right out once we got back in the same room and for the most part we played right through the tunes, not flawlessly, but they were played using most of the right notes.”

Dunbar: “I knew playing again after so much time would be fun, mostly because we got along well, the songs are fun to play and it beats workin’! For me it was great to turn the amps up and enjoy the moment.”

CVW: Why did E&A not reunite earlier?

Ellis: “Since ’94 Max has lived in Minnesota and Damon has lived in San Francisco and Los Angeles. Plus, a 25 year reunion just has that special ring to it, a certain ‘Je ne sais quoi’…oh yes.”

Dunbar: “Over the years people would ask if E&A would ever get back together or jam and I always had the same answer, ‘anytime and anywhere.’ I think it took many years simply because we had all moved on to other bands, locations, college, jobs and stages of life. Years ago I was in Palm Desert going to the Wherehouse Music to buy CDs and a guy I had never seen before said, ‘Hey, weren’t you in E&A? Man, you guys rocked’ or something to that effect. Music has a way of bringing people together and providing enjoyment and that is why I love it so much.”

CVW: The early 90’s had some cool music being born, i.e. Grunge, Stoner Rock. Where does E&A settle in?

Ellis: “It certainly did…Kyuss, Evolution’s End and Unsound were stirring up colossal dust clouds over the Iron Door and Nude Bowl. I think that is where we were somewhat unique. You could almost dance to our stuff if you wanted to. Now that didn’t always go over well with the Punk Rock elite of course, but the legendary desert band Doted Swiss had disbanded and someone needed to fill the ‘College Music’ void.”

Dunbar: “To me, the desert scene is more of an ethos or spirit more than a specific type of genre. Everyone is aware of the Kyuss/Stoner Rock label, but there were so many different types of bands back then and even now. Some shows would have Punk, Speed Metal, Rock, Improvisational and Jam bands all on the same night.”

CVW: Your music is wide-ranging. How much did you influence each other?

Ellis: “That’s got a lot to do with Max’s song writing and wide range of influences. We were all into completely different $#!T back then though. Rob would go on about some Alt Funk band called Mary’s Danish, then I’d play him a classic Iron Maiden bass line and he’d say, ‘Cool, is that yours?’ Of course I’d just answer, ‘Uh…yeah.’ We were the poor man’s Faith No More I guess.”

Dunbar: “I think at the core of what we do is a Hard Rock, mixed with whatever feels right; a Country beat, a song about being MacGuyver, blistering guitar solos or no solos.”

CVW: What are you looking forward to most from your Concert for Autism benefit performance?

Ellis: “Well, you can’t commend Josh and Linda Heinz enough for what they do to make this event happen. They work tirelessly to put their heart and soul into it every year. We definitely want to make them happy for having us. Hopefully we bring in some ‘new-old’ faces from back in the day, who in turn bring their kids that are now probably the same age as we were back then. Mostly looking forward to playing the old tunes with my old friends.”

Dunbar: “I’m looking forward to playing in front of old/new friends, family, and the desert music community all for a good cause.”

CVW: Where does E&A go from here?

Ellis: “Disneyland! Uh…wait, too expensive and far too many people. How about Comic Con or Coachella? Oh the same…plus we’ll never get a ticket. I guess Max will go home to Minnesota, Damon will go back to L.A. and Rob and I will stay here in the desert, run into each other now and then and say, ‘Hey we should do another E&A reunion.’”

Dunbar: “Honestly, I’m in the moment. I could see playing another benefit type of show again in the future, maybe with a new song. Who knows, again, everyone has their own lives and half the band does not live in the desert.”

CVW: Will we see your music released in the next quarter century?

Ellis: “A year ago I would have said no way, but now I realize if you give us at least 25 years, yes, we can probably make something happen.”

Dunbar: “That is one thing I wished we could have done was a proper album. Every recording we have is from my old 4-track Tascam. We had one studio EP recording, but I’m not sure where those tapes are.”

Ellis provided CV Weekly with some older audio recordings and recent video footage of rehearsals. It’s amazing what this band would have accomplished. We asked Ellis to provide the insight into each song like only ‘Chuckie’ could.

“Powery and Ballady…I think it’s about a girl.”

”’Give Us All Spoons’ as it’s known is an instrumental and has been the first song played at every E&A show that I know of.”

Naked and the Dead

“Now we’re getting into the obscure. One of the later ones. More epic than most of the others. You probably won’t hear this one this time around, maybe next reunion.”

“My favorite! A really feel-good tune. This one started from a riff Damon had with a prior band and unlike most of our stuff which was written and prearranged by Max, this one was pretty much composed at rehearsal.”

”’Paint it Black’ as it’s known. A Rolling Stones song I had always wanted to cover, and did.”

“Another cover, this time by The Church. Alternative before there was Alternative.”

“Yes, that’s right, way back when The Hellion’s nannies were still powdering their little bottom’s with talc, we were already playing the David Bowie classic. Sure, they do it better, they’re way more handsome and relevant, but let’s not split hairs here okay?”

“A song about the unidentified right-fielder in Abbott and Costello’s Who’s on First. No, not really, another Social D-ish Punk tune. Max actually does this one really good solo acoustic, but we only get 30 minutes at the Autism benefit so you’ll have to fly to Minneapolis if you want to catch him doing that version.”