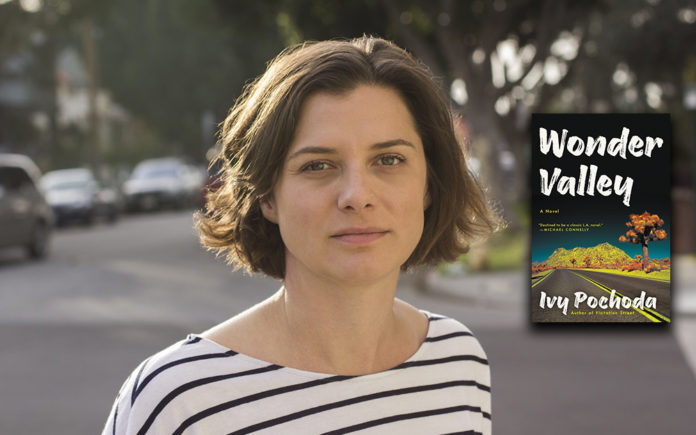 There are many reason people leave home.  Some include: going off to college, finding a new job, and running from the law.  In Ivy Pochoda’s Wonder Valley (Ecco, 327 pages), fear and loneliness drive people away and force them together.

The story takes place in Southern California and follows multiple characters as they aimlessly move about and try to disappear in Los Angeles and the High Desert.

It begins in an LA traffic jam.  Cars are stopped in all directions as a naked man runs through, against and over cars.  We find out later that his name is James and he appears blissed out as drivers scream profanities and police try to stop him.

James runs right by Tony who is stuck in his car and late for work.  With a sudden impulse, Tony leaves his vehicle right where it idles and takes after the runner.  A lawyer, Tony is dressed for his high-paying job at the studios.  He wants to catch the young man, not sure of his own motivation maybe jealousy, or envy of the runner’s freedom.

Britt has hitchhiked from Palm Springs into the High Desert.  Her ride bailed on her, and now she is wondering alone in the middle of nowhere.  With vague directions to “Howling Tree Ranch” commune, it may be her only hope to survive and the thing she needs to drop off the grid.

Fresh out of Juvenile Hall after a decade, Ren wants to find his mother who has gone to the West Coast.  With a name of an LA hotel scribbled on a small piece of paper, Ren gets off the bus and goes in search of the only family he has.  But finding his mother on skid row may not be that easy.

Blake and his Samoan friend Sam are on the run from Las Vegas where Sam killed a guy in self-defense.  Knowing Sam had a good reason to murder a man wouldn’t matter to the police, so they are heading to LA stealing cars and hiding out in abandoned desert shacks.   Blake wants to go straight and be one of the good guys, but Sam keeps dragging him back.  Sam is his mentor, rescuer and idol.

As all these misfits try to escape themselves and their demons, they collide.  Their paths connect in bizarre, dangerous and consequential ways.

Author Pochoda does a lovely job creating the desert setting and LA madness.  She writes with incredible insight as she gets into the heads of this diverse cast of rag-tag broken characters.

Pochoda’s description of the downtown streets and life on skid row are especially terrifying yet somehow beautiful as she unveils the lives of a community, those who live and fend day and night on the mean, unwelcoming streets.

There are amazing passages in Wonder Valley that capture heartache, loss and delusion.  All the characters live and breathe on the page.  Some felt like they live right here in the Coachella Valley.  They are the people we pass, never acknowledge or avoid.

As much as I enjoyed the outsiders in this book and the authors incredible insights into human frailty and brokenness, I found the structure challenging.  It jumps in time and changes characters from 2006 to 2010 and appears to circle around on itself.  This may be brilliant, but I cannot be certain without reading it again.  Be aware of this shift, it may provide a greater understanding and perhaps even an existential overview.

There are loose ends in this slice-of-life story, and as much as I enjoyed the teeth in Pochado’s writing, I felt it had no significant bite.  I wanted a bigger more powerful ending.

However, I am putting Pochoda on my list of favorite authors.  I want to read everything she writes and look forward to what comes next.  Wonder Valley is only her second novel and I expect more good things.  There are an infinite amount of stories to be told about our human nature and our search to find home.  We are starved to get a better glimpse of our strange reality and understand our desperate mortality.