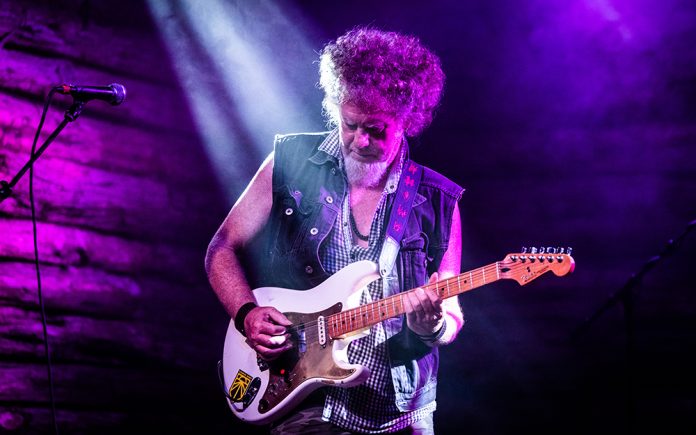 By Noe Gutierrez / Photos By www.vinyllens.com

His majesty of the jam band Robbi Robb will be bringing some of his friends to The Hood Bar and Pizza on Friday, March 13, 2020, to pave the way for Joecephus and the George Jonestown Massacre. The Hood is located at 74-360 Highway 111 in Palm Desert, California. Doors open at 8 p.m. and the show starts at 9 p.m. There is a $5 cover charge.

The author of the limited edition, The Art of the Jam Band, an inspiring and encapsulating book about the art of free-form improvisation in the context of a band, Robb is also the luminous leader of the bands Third Ear Experience with Doug Pinnick (King’s X), Mike Hansen (Hurricane) and Amritakripa, and preeminent rockers Tribe After Tribe.

Robbi Robb & Friends includes special guests Arthur Seay on guitar (House of Broken Promises, Unida), Robbie Waldman on vocals and guitar (Waxy), Bri Cherry on violin and Noe Gutierrez on vocals to name a few! For this show, Robb has Amritakripa on keyboards, Jorge ‘Bassman’ Carrillo on bass and Greg Corcione on drums.

Robb on the basis for Robbi Robb & Friends: 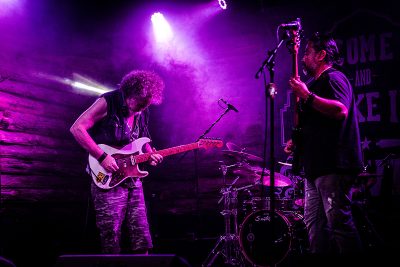 “The name Robbi Robb and Friends is derived from two of my favorite guitars players when I was in my teens, Johnny Winter and Jimi Hendrix. But it was the music of Miles Davis and the birth of ‘cool’ that would create an obsession with improvisation. This entails many hours of study and practice, which I did. But something wasn’t clicking. I just couldn’t break the boundaries of the guitar or integrate all the knowledge and practice into a unique expression. I studied and watched documentaries of the great Jazz players from Wes Montgomery to Miles and all the cats between and after. And then one day, I saw what was happening in that world. And I now believe that this particular thing is more important than all the study and learning and practicing. It is to me, the absolute ultimate thing that will help carve a musician into his own. And that is to surround himself with great players. To jam with musicians who are better than you, to jam with musicians who inspire you. And to jam with musicians who have found their own unique way of playing. This is the environment that Miles grew up in since he was 13 years old. Miles talks about jamming with Charlie ‘Bird’ Parker and being absolutely humiliated by Parker’s brilliance that he would freeze up in terror. Same when he jammed with Dizzy Gillespie. But most there was a community amongst all those people. They say you could stand on 52nd street and great Jazz was pumping out from all the clubs. A musician could club hop, sitting in with greats all the night long going from club to club, from one great band to the next.”

“And this is the idea behind Robbi Robb and Friends. Every time you come to see a performance by this name it is my dream that I am on stage with great players. And this brings me to discussing the players who will be joining us this Friday.”

“After I first saw Arthur with House of Broken Promises play live, I passed him in the dressing room and without saying, ‘hi’ or introducing myself, I just said, ‘university’. He, with a puzzled look on his face, asked me ‘what?’ I told him again ‘university’. And then explained that he sounded to me like a university of riffs. He had so many little melodic riffs and ideas pouring from his guitar the whole set, I was super inspired by him as a player. I once asked him if he gave guitar lessons and he said, ‘no’. So I am super excited to have Arthur hop up and jam with us, it’s gonna be uplifting for all!”

“When I was first saw Robbie play, I was taken by his melodic simplicity, and his dedication to tonal quality. His phrasing is pretty unique, in that you think he is going for a common Blues phrase and then he takes a sharp turn and it’s not so common anymore. Robbie has sat in with us before and it was awesome! I threw him into deep water only to watch him smiling and swimming around with no problem. Robbie has a great community spirit and I’m glad to have him joining us again.”

“Bri was with us at the formation of 3rd Ear Experience. We had a small community of musicians at the time and we all played in three or four different bands together; same band members completely different music. It was a hard time, lots of militant rehearsals, and lots of imbibing, lots of gigs including big festivals. Bri recorded with us on the first 3rd Ear album, those tracks awaiting release safely in the digital vault. At the time, Bri and I were still learning the art of ‘weaving’. Weaving is when all three musicians are soloing at the same time, while being super aware of the others, but still getting lost in the music. It is with great pleasure that we will be joined once again in a loose jam situation, where more weaving will be done.”

“We are also happy that Noe will be joining us on vocals. I didn’t know he sang until one night at a fundraiser he sang with some friends. I have seen Van Morrison live and there was something about Noe’s presence and power that reminded me of Van the man. Oh yeah, I encourage Noe to do a lot more of this, as he is a natural and is considered a satellite member of Robbi Robb & Friends.”

“We also expect an awesome jam with Joey Killingsworth. Joey has had the great fortune of jamming with Johnny Winter and other players of respect and note. Joey is a versatile rocker who also turns out some great ambient guitar music in the style of Robert Fripp. I really hope we get to go some deep places with Joey this Friday.”

And as always expect the unexpected, you never know who will be popping in! So that’s that and that’s that.”