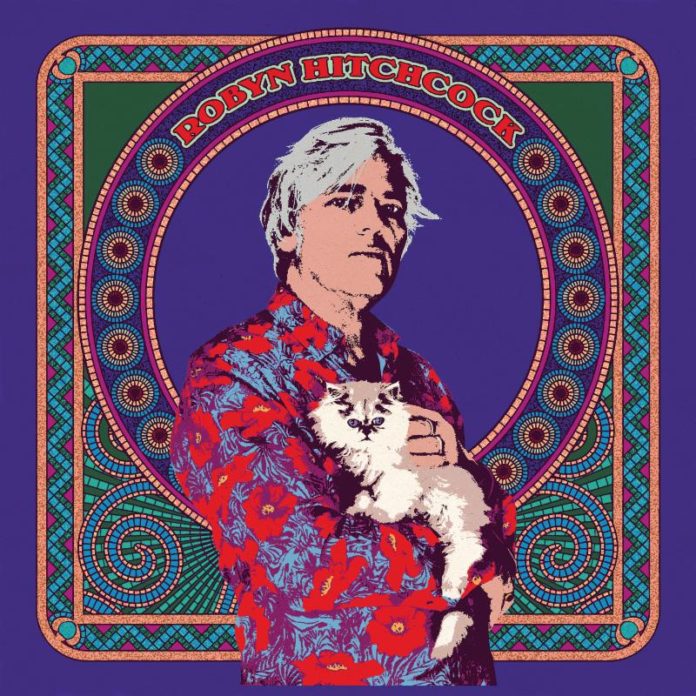 ​Robyn Hitchcock has always colored outside the lines. The idiosyncratic singer-songwriter was born in London, England in 1953. His father, Raymond, found success as a novelist. He is best known for his book,”Percy,” about a man who has a penis transplant and sets off to find the donor(!).

​Robyn attended boarding school at the height of the Swinging ‘60s. He has said he spent those years completely marinated in music. He soaked up bands like the Doors, Jefferson Airplane, Velvet Underground and Captain Beefheart. But the artists that made the most lasting impressions were Bob Dylan, John Lennon and original Pink Floyd visionary, Syd Barrett.By the time he emerged from Winchester College, he knew he wanted to make a living playing music.

​He began his career busking on the street in Cambridge and playing in cover bands. Although he started writing songs at 16, it took him years to feel completely proficient. By age 23 he formed the Soft Boys, which went on to include Andy Metcalfe, Morris Windsor, Alan Davies, Kimberley Rew and Matthew Seligman.

​A sharp distillation of Punk energy, Psychedelia, and jangly Folk-Pop, the Soft Boys were the British equivalent of Big Star. Never really popular, they were wildly influential to U.S. bands like R.E.M., Replacements and the whole L.A. Paisley Undergroundscene. They recorded two albums, A Can Of Bees and Underwater Moonlight before coming apart at the seams in 1980.

​Robyn officially embarked on a solo career in 1981, releasing his debut, Black Snake Diamond Roleand quickly followed up with Groovy Decay and I Often Dream Of Trains. All three displayed his quirky, slightly surreal humor. He recorded his next few albums Fegmania, Element Of Light, Globe Of Frogsand Queen Elvis with his backing band, the Egyptians,which featured ex-Soft Boys Morris Windsor and Andy Metcalfe.

​Songs like “My Wife And My Dead Wife,” “Uncorrected Personality Traits” and “Egyptian Cream” introduced the world to Robyn’s hypnagogicstyle. Slowly but surely, he began to make inroads into the American music scene. Rock critics and the cognoscenti immediately got it, and pretty soon major labels caught on. The Globe… album was released on A&M records and it contained a bona fide hit, “Balloon Man.” Although he never hit heavy rotation on MTV, he found a niche on their “120 Minutes” program.

​In the ‘90s, Robyn leap-frogged from A&M to Warner Brothers Records. The Egyptians had disbanded and for a moment in 1994 the Soft Boys reunited, (they would do so again in 2002 and record an album, Nextdoorland.) He recorded albums at a furious clip, first Perspex Island And Respect with the Egyptians, along with Moss Elixir and Jewels For Sophia solo. As the decade came to a close, he made a concert film, Storefront Hitchcock, with Silence Of TheLambs filmmaker Jonathan Demme.

​The 21st century dawned and Robyn had left Warner Brothers, he continued to be wildly prolific, self-releasing Luxor in 2002 before signing with respected indie, Yep Roc. With the small, hand-craftedlabel, he finally found a home.

Founded in 1997, by Tor Hansen and Glenn Dicker, the North Carolina label boasts a roster thatincorporates myriad styles. From the Roots Rock ofDave Alvin, Caitlin Cary and John Doe, to the Post-Punk of Gang Of Four, Bob Mould and Paul Weller. They offer a safe haven for singer-songwriters that defy categorization like Greg Brown, Nick Lowe and Chuck Prophet.

​The last 15 years at Yep Roc have given Robyn the freedom to let his freak-flag fly, allowing him to dip his toe into a variety of genres. In 2004 he recorded the Countrified “Spooked” with Americana artists (and longtime admirers), Gillian Welch and David Rawlings.

His next three records, Ole’! Tarantula, Goodnight Oslo and Propellor Time were collaborations with the Venus 3. An ad hoc indie super-group, aside from Robyn, it featured R.E.M. guitarist Peter Buck, Scott McCaughey of Young Fresh Fellows and Bill Rieflinof Ministry. During this era he was also the subject of an appropriately sardonic documentary, Robyn Hitchcock: Sex, Food, Death…and Insects.

​For the last few years, he has been back on the solo trail, releasing 2011’s Tromso Kaptein, which was recorded in Northern Norway. He quickly followed up with 2013’s Love From London, and The Man Upstairs in 2014. The latter included five Hitchcock originals and favorites from Psychedelic Furs, Grant Lee Phillips, Norwegian band I Was King and Roxy Music.

​Recently, Robyn and his girlfriend, singer-songwriter Emma Swift relocated to Nashville. Coincidentally, Nashville based musician/producer Brendan Benson had reached out to Robyn, hoping they could collaborate. The Michigan native made his bones as a solo artist, but found commercial success fronting Jack White’s Raconteurs. He and Robyn set up camp at Ready made, Brendan’s East Nashville recording studio and the result is his 21st album, simply entitled “Robyn Hitchcock.”

​The first two tracks set the tone for the whole record. The Opening cut, “I Want To Tell You AboutWhat I Want” takes no prisoners. Jittery and stripped down, it employs sinewy guitars and a trigger-happyBack beat. Robyn’s vocals shapeshift from a dour baritone to his quintessential adenoidal tenor to a more beguiling falsetto. It feels As though he’s having a one-sided conversation as he reveals a laundry List of global demands over splattery guitars and shivery keys. “I want world peace…and the only God should be the God of L-O-V-E love, I want the non-evasive kind of telepathy that lets me feel what it’s like to be somebody else.”

​As though someone has flipped the radio dial, the rippling riffs of “Virginia Woolf” careen out of the speakers. Bee-stung guitars collide with a rollicking rhythm, and the lyrics toggle between the desolate final moments of Virginia Woolf and Sylvia Plath. Robyn’s matter-of-fact reportage avoids judgement, he neither condones or condemns their suicides, explaining “Sometimes you feel like you don’t want to feel, sometimes it hurts where you don’t want to hurt.”

​The great thing about being labelled eccentric is you’re never constricted by preconceptions. Robyn has made a career out of reinventing himself and his music, virtually from one song to the next; case in point, “Mad Shelley’s Letterbox.” The song takes the Beatles’ “Eleanor Rigby” and flips it on its side. Over thrumming guitar, spatial bass and cloudbusting drums, Robyn attempts to assuage the feelings of a lonely spinster with his dick! “What could anybody say, except in hindsight this was bound to happen/When two souls collide this way there’s no compartment they can find a map in.”

​Then there’s the boinging Buckaroo bounce of “I Pray When I’m Drunk.” A twangy two-step powered by banjo-riffic guitar and a giddy-up rhythm, it opens with a classic C&W couplet; “Well, I pray when I’m drunk, I pray for guidance, to get me through the sewer where I am/Yeah, I don’t know who to, I pray to someone, to get me on my way and give a damn.” He finally concludes “Some things can change, some things cannot change, all things are strange.”

​The catchiest tracks on the record, “Detective Mindhorn” and “1970 In Aspic” are positioned back-to-back. The former is anchored by a driving bongo back-beat, Beatlesque “Getting Better” guitars andpercolating bass lines. Effortless and effervescent, guitars jangle and chime as vocal harmonies lovingly cascade over some jabberwocky about the title character; “Detective Mindhorn, with your Caterpillarface, Detective Mindhorn, won’t you open up the case/I’m a Butterfly the jealous fingers framed, no one wants to be ashamed.”

​The latter recalls the winsome Country Rock that characterized early Elton John songs. Propelled by dense harmonies and spiraling pedal steel, the lyrics offer a clear-eyed take on that halcyon, hedonistic era. Backing vocals act as a gadfly Greek chorus as Robyn reflects on the everyday decadence; “1970 keeps coming, and you stay for the applause/Good and evil took you upstairs and explored you on all fours.”

​Robyn has always had a soft spot for his slower, more introspective numbers. He has crafted a couple of great ones here. “Sayonara Judge” is the emotional center of the record. High lonesome pedal steel connects with a tick-tock rhythm, sonorous strings and acoustic arpeggios. Cryptic lyrics take the listener to a psychic precipice. A downcast ballad, it slowly gathers speed building to a chunky crescendo.

​“Raymond On The Wires” blends prickly guitar, sawing cello notes and icy synths. A poignant childhood recollection, the lyrics are rife with the sort of details a young boy would notice and dulycatalogue; pneumatic tires, rivets, wheels, gears and wires. It also quietly pays homage to an enigmatic father he loved but could never really know.

​The album’s final two tracks, “Autumn Sunglasses” and “Time Coast” are Robyn at his most Psychedelic. “….Sunglasses” fuses lowing cello, twinkly percussion and modal guitar. “Through the walls, through the looking glass” these spectacles open a mental portal allowing visions of spectres and silhouettes. “You’re so nice” he intones, “all encased in your shades.”

​“Time Coast” closes things on a prickly, Punk-tastic note. Dropped drum beats intersect with slithery guitars, weaving through a busy arrangement. Robyn time-travels to his prenatal beginnings; “I’m naked in the water, the amniotic sea/Inside my real mother, she covers up for me.” It’s a trippy finish to an excellent record.

​More than 40 years into his career, Robyn Hitchcock has (accidentally) crafted his most accessible, commercially viable record. Let Robyn Hitchcock become your gateway drug, it will lead to a most subversive and sublime musical addiction.