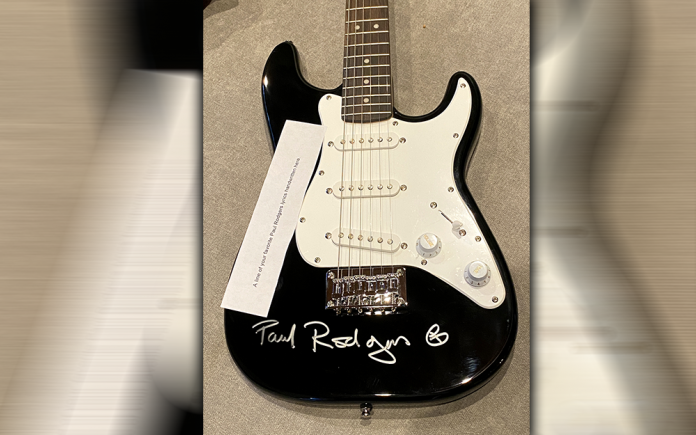 The historic Plaza Theatre in downtown Palm Springs announced that there will be an online auction in conjunction with the sold-out “Rock the Plaza” fundraising concert that will be performed on Friday, November 11 at 8 PM. The online auction will feature many rare, one-of-a-kind, and unique items including signed guitars, drumheads, CDs, posters, stage memorabilia, experiences, and much more. The items will be available for viewing and bidding from November 1 (9AM) to November 15 (noon) at https://bit.ly/rocktheplaza. Highlighted auction items include:

Special Guests: All performers will sign the guitar on the back with a silver paint pen at the concert. Comes with an electric pick up.

Paul McCartney and will be posted directly to them by tracked delivery, all costs to be covered by MPL Communications. Includes: 180-gram. half speed mastered vinyl 4LP + 45rpm 12-inch vinyl EP with 105-page hardbound book in a 12.5″ die-cut slipcase and Let It Be + Get Back + Let It Be LP + 2LP outtakes, jams, rehearsals & studio chat.

Dr. Charles Justiz for a personal tour for six people of the Palm Springs Air Museum and then up to three members of the party will be taken on a flight over the beautiful Coachella Valley.

About the Rock the Plaza Concert

Orianthi. The band will include drummer Matt Sorum (Guns N’ Roses), Jon Button (The Who),

Eric Singer (Kiss) and more. The concert will take place on Friday, November 11 at 8 PM.

Additional information may be found at savetheplazatheatreps.org.

About the Plaza Theatre

The Plaza Theatre in Downtown Palm Springs opened in 1936 with the premiere of the George Cukor film, “Camille,” attended by its legendary star, Greta Garbo. Over the years, the theatre was the venue for memorable performances by entertainment giants Bing Crosby and Frank Sinatra.

Site in 1991. The theatre is in dire need of repair and restoration and the City of Palm Springs is committed to bringing it back to its original luster as the heart of the city. The restoration of the building is managed by Plaza Theatre Foundation, a 501(c)(3) non-profit organization.

Contributions made to the Foundation are tax deductible to the extent allowed by law. For more