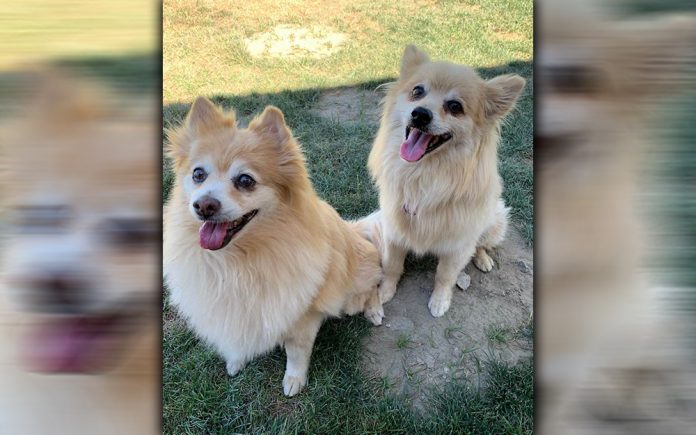 It was love at first sight when Ramon Cortez and Vanessa Ortis saw Rockey and Carter Lee at the Loving All Animals’ Pet Rescue Center shelter.  The couple was looking for one small size dog for their son.  However, after seeing the bond between the two dogs, knew they could not adopt one of the Pomeranians without the other.

However, life has been a “rocky” road with many changes and tragedies for these two Pomeranian pups.  Their first owner surrendered them to a “high kill” public shelter.  They were rescued by Forget-Me-Not Peke Rescue, a Cathedral City animal welfare group, but the organization closed down before the dogs could be adopted.  In 2016, Loving All Animals took custody of the remaining dogs at the facility, including the Pomeranians.

Eva Fischer offered to foster both dogs so they could stay together.  She reported, “It was an honor to take care of these dogs.  They are wonderful pups, and they got along so well with my dogs.”  A loving foster home helps dogs transition from the stress of being in a public shelter to a family home.  A foster home helps to assess how the dogs react with people and other animals.  Fostering also provides some basic training to make them more adoptable.

After they were posted on social media, inquiries came in from prospective adopters.  A woman named Mary who resided in Morongo Valley adopted both dogs.  However, Mary passed away in 2018, leaving the dogs in limbo again.  Mary’s adult son failed to notify Loving All Animals about his mother’s death, even though it is their policy to always accept return of their adopted animals.  Not wanting to take them himself, the son instead relinquished them to the Yucca Valley Animal Shelter, a San Bernardino County facility.  The dogs were now back at another crowded open-admission public shelter. 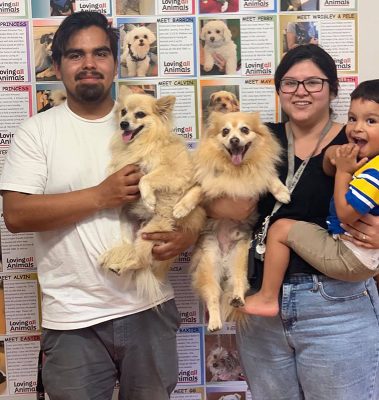 The two dogs were quickly adopted from the shelter, only to be quickly returned after one of them had an “accident” inside the home.  The shelter staff tracked the dogs’ microchips to Loving All Animals.  They telephoned LAA to inform them the dogs were at their shelter and in imminent danger of being euthanized.  Volunteer Rosemary Conniry quickly drove to the Yucca Valley shelter to pick up Rockey and Carter Lee, and the grateful duo sat happily on the car ride back to Loving All Animals.

Three years had passed, and the dogs were now 9 years old.  They are a bit larger than the purse size Pomeranian dogs that quickly get adopted.  However, their charming personalities quickly made the brothers favorites of the shelter volunteers.  Loving All Animals arranged for their thick coats to be groomed, and scheduled a dental cleaning at a local vet.  The bonded dogs moved together, ate together, and insisted on being together in the same kennel at night.  Their magical bond made it clear they should be adopted together, even though that might mean a longer shelter stay.

Dogs are resilient, live in the moment, and the brothers quickly bonded with their new family, including 3-yr-old Henry whom they adore.  The Poms include the family’s Husky dog in their happy play.  Ramon enthusiastically reports, “We love these dogs!  It feels like they have been with us forever.  They are going to stay with us for the rest of their lives.”   There is something special about dog “sibling love” and they extend that love to the humans and other dogs around them.  There is finally a happy ending for Rockey and Carter Lee with this young family.  Contact Loving All Animals at (760) 834-7000 if you are interested in fostering a dog (or maybe a bonded pair).