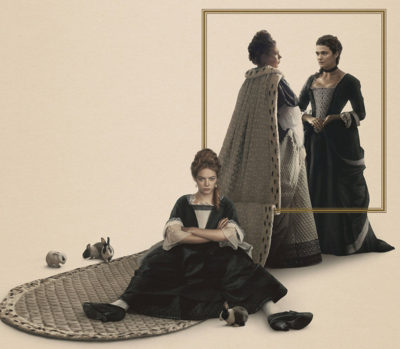 Set in the early 18th century.

England is at war with France.

When new servant Abigail Masham (Emma Stone) arrives, she charms Sarah who takes Abigail under her wing.   Abigail seizes the opportunity to return to her aristocratic roots.  When the politics of war become all consuming for Sarah, Abigail fills in as the Queen’s companion. Their burgeoning friendship gives her a chance to fulfill her personal ambitions and she will not let any thing or person or stand in her way.

Director Yorgos Lanthimos continues to be an edgy, eccentric and surrealistic filmmaker.  Clever dialogue saturates the entire script’s lens on the pathetic regal figureheads, their self-serving machinations and private nonsense.

This cynical and hilariously vicious black comedy of royal manners run amuck is tremendously entertaining.  It is far removed in style and tone to any other piece of historical fiction.  The well-cast leads are at the top of their game playing strong, and fierce women.   Strong recommendation for this gorgeous and witty spectacle 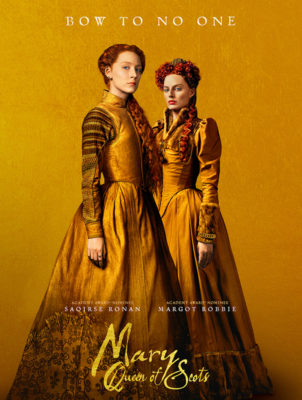 Josie Rourk’s engaging film examines the tempestuous life of the charismatic Mary Stuart (Saoirse Ronan) who became Queen of France at 16 and was widowed at 18.

She defies pressure to remarry and instead returns to her native Scotland where she reclaims her rightful throne.  But both Scotland and England fall under the rule of the powerful and compelling Elizabeth I (Margot Robbie).  Mary Stuart’s attempts to overthrow her cousin Elizabeth finds her condemned to prison before facing execution

Both young queens, female regents in a masculine world, behold their rival “sisters” with fear and fascination.  Opponents in power and in love, the two young royals must decide and discover how to play the game of marriage versus independence. 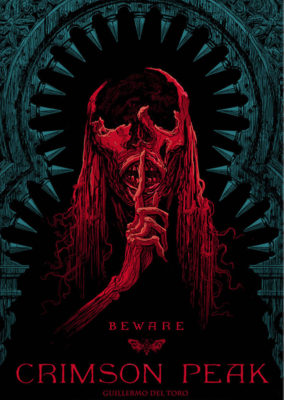 From the imagination of Oscar-winning director Guillermo del Toro comes this lavish, stunningly realized journey into the very dark heart of Gothic romance.

The lush visuals alone will seduce and tantalize fans that crave the bloody thrills and chills of Giallo inspired movies.  All the tropes are here: a creaky old mansion, dark spooky hallways, unsavory characters, ghosts romping around in the middle of the night, and a wide-eyed innocent damsel (Mia Wasikowska) in distress waiting to be rescued.  Here is a perfect blend of elements that conjure an engaging tale of mystery, romance, and horror.

The story starts with young Edith Cushing grieving the loss of her mother. On the night of her mom’s funeral, she gets a visit from her mother in the shape of a dark ghastly ghost.  She warns Edith to stay away from Crimson Peak.   Years pass and Edith (Wasikowska) is now a beautiful young woman who shares a home in bustling New York with her beloved father, Carter Cushing (Jim Beaver).  Edith has aspirations of becoming a writer but spends much of her time supporting her wealthy father in his business endeavors.

One day British aristocrat siblings Thomas (Tom Hiddleston) and Lucille Sharpe (Jessica Chastain) roll into town seeking wealthy investors to raise funds for their invention that will dig up red dirt clay to make the strongest building material on the market.  Carter Cushing is suspicious of the newcomers, while Edith is being seduced by the charms of Thomas. On the sidelines is family friend Dr. Alan McMichael (Charlie Hunnam), who is also biding for Edith’s affections.  The love triangle is quickly resolved after Edith experiences another family tragedy. She marries Thomas and goes with him to Allerdale, his country estate in England to start a new life.

Edith tries her best to bond with her sister in-law, but Lucille will have nothing of it. Clearly, she’s hiding something and is intent on keeping control of the home where she grew up.  As Edith is settles into her new home, much to her dismay things start going bump in the night.  As she wonders through the old mansion, Edith finds herself stalked by menacing spirits.  But is Edith in more danger from the ghosts that haunt her, or the people she now calls family?

It’s the fabulous production design that’s the real star of this film.  Each frame is a work of art.

Gorgeous over-the-top costumes, elaborate paintings on the walls, sweeping staircases, snow covered in clots of red, shadowy, horrific, decaying figures floating and crawling around the house, are a few examples of the elements that make up the elaborate design of the film that alone is a reason enough to see it.

Wasikowska is angelic as she roams the frozen, aging estate.  Hiddleston exudes torment as his character battles loyalty to his sister and love for his new bride.  Chastain (her performance is what lingers longest) plays dark and twisted to the max.

Surprisingly violent, “Crimson Peak” retains its creepy, weird, horrific, and unsettling tone up to and through final climax.  The new home video transfer, the film was released theatrically in 1015, is top-loaded with a huge trove of bonus material and behind-the-scenes featurettes on the production process.  Del Toro delivers a wealth of fascinating insights in his typically generous and expansive commentary.  Arrow Video. (Limited Edition)