Runway shows, American Designers and more Fashionistas than ever before!

The Coachella Valley seems to have a habit of taking the ideas that skeptics doubt will ever take off and turning them into some of the most desirable events attended by lovers from all over the world of whatever the event promotes.

And in Palm Desert, it’s Saxony Group Fashion Week™ El Paseo, which celebrates its 10th anniversary with runway shows, trunk sales and in-store events in The Big White Tent on Larkspur Lane and the shops and boutiques that line the fabled shopping district in Palm Desert, beginning on Saturday (March 21) and running through Sunday, March 29.

It’s certainly a time to celebrate for Palm Springs Life magazine. Fashion Week was the brainchild of a long-ago marketing director who came up with the idea as a promotion for the shops and boutiques that are listed in the El Paseo catalogue and store directory that PSL also produces each year.

And when the idea was broached, when it was just called Fashion Week El Paseo, it was hoped that it would bring a greater sense of style to the desert.

“That first year we thought we’d give it a try and see what happened,” said PSL Fashion Editor Susan Stein, who had only been at the magazine for a short time back then, but whose fashion sense has helped to propel a desert distraction into an anticipated yearly event. The week-long event now attracts more than 40 percent of its attendees from around the country and around the world. “We were pretty pleased with that first year, and truthfully, it’s hard to believe that it’s already been 10 years.”

This year’s opening night runway show promises to be every bit as spectacular as any you would find in New York, London or Milan. “Not only are we bringing back our most popular designers, but there’s a huge entertainment factor, too,” Stein added. The Saturday (March 21) event starts with a red carpet arrival of local celebs through a phalanx of photographers, to the star-studded reception. The runway show itself features rock music and a touch of theater with the aerialists ala Cirque de Soliel. It’s all topped off with a show that features designs from Trina Turk, Oliver Tolentino, Kevan Hall, Anthony Franco and other former featured designers.

A lot of the success of the event, Stein believes, is owed to timing and living in a place where there are a lot of very fashion savvy residents who tuned into and turned onto the idea that the Coachella Valley not only has its own style but also wanted more couture designers and the drama that they’d find in the Fashion Week shows that are found in places like New York, London or Milan.

There is a difference in the desert’s version of Fashion Week. “I have always believed that there was not enough for consumers,” she said. With that in mind, inviting the El Paseo boutiques and shops to participate with in-store events and a runway show has always been a priority for the week. “We’ve never had a problem getting them to participate. In fact, just about every store on the street wanted to be a part of the show this year.”

From feedback from the stores, the success of Fashion Week has continued to grow. Even for larger stores like Saks Fifth Avenue. “Saks only joined us about four years ago,” Stein said. The Palm Desert store asked for more designer lines for the week and eventually ended up carrying stock from designers not previously kept at the store. This year the highlight of the Saks participation includes a trunk shows from Zang Toi, the 2014 featured designer, and Roberto Cavalli. “Cavalli himself won’t be here, but it’s impressive that Saks is offering his designs in a trunk show,” she said.

One tenet of Fashion Week over the past 10 years has been that the featured designers were Americans, and especially West Coast designers. “That might just change next year,” Stein teased.

Just don’t ask her which event she’d recommend as one not to miss. “That’s like asking me which one is my favorite child!” she said. Some are close to her heart, like the Monday night El Paseo show; Michael Costello’s Project Runway show on Tuesday and his Couture Collection show on Wednesday, “I am so proud of Michael and what he’s accomplished,” she said, and the FIDM/Fashion Institute of Design and Marketing that features the debut of 11 graduates of the Los Angeles design school on Thursday night.

“Truthfully, I love them all,” she added. 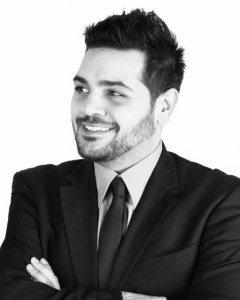 At 18, Michael Costello opened his first design studio in a second floor space on North Palm Canyon Drive in Palm Springs. “It was just me,” he said last Saturday from his workroom and showroom in downtown Los Angeles. “At the time it seemed so big to me, but I went back recently and it’s really tiny!”

Today Costello dresses Beyonce, Lady Gaga, Kim and Khloe Kardashian and Britney Spears for the stage and red carpet, employs a staff of 32 including pattern cutters who learned their trade working with the likes of Gucci and Halston, and to get back to working fabric on a sewing machine, he works on Saturday afternoon. “This is when it’s quiet and I get to do what I want,” he said.

He is known for his draped gowns, often designed with cutout work or thigh-high slits that offer the wearer a dramatic look for the red carpet and the one thing most couture gowns lack, comfort.

His February runway shows at the Mercedes Benz Fashion Week in New York City were the hit of the week. “I had looks that were being copied by everyone,” he said with disbelief. “Every time I opened the paper, I keep seeing something from my shows; it really was insane.”

Costello prefers to design dresses for wear-ability, he said.

“I want my dresses to feel like they’re easy to wear,” he said. “When a woman puts one of my dresses on, I want her to feel magical, like she can wear it all night and never be uncomfortable.”

Costello’s pride and his passion is his work. And at the ripe old age of 30, looking back on his career, the biggest difference from his shop days in a shop in Palm Springs is the quality of the fabrics that he is able to work with and the experts who work with him in his shop. “I have a tailor who worked for Gucci and another who worked with Halston,” he said with a bit of awe. “Sometimes I want fabric to do something that I’m not sure it can do, but they’ve both been in this business so long, they are constantly teaching me ways to push my own limits.”

It was his appearances on both Project Runway and Project Runway All-Stars that helped push Costello out of his comfort zone and into the big leagues of design. “I started out when I was so young and I really didn’t have anyone to mentor me,” he said. “The experiences on those shows really showed me that I could try anything.”

What surprises him most are the messages on social media from younger designers who now look up to him for advice. “It’s something I never thought would happen to me,” he said. “And I love that; I love being able to help another designer. It’s very exciting for me.”

It’s one reason that the Project Runway show for SGFWEP is so important for him to produce. “I always want to see a different point of view,” he said of the designers he chooses each year to bring to the desert. “There are so many incredible designers who go on the show and when it’s done, don’t have the opportunity like this. For me, it’s a way to give something back. And I love to see what they all bring to the show.”

The Big White Tent at Larkspur and El Paseo