While in high school, Sean Knight was asked to write a paper on his choice of a career field. At 16, he wasn’t interested in pursuing many of the careers chosen by his class mates (doctor, teacher, firefighter, etc.). That paper would influence the next 16 years of Sean’s life. “I always had a passion for music and thought ‘I’ll be a dj.’ As part of my paper I interviewed the night jock at the Oldies station in town and even went to sit in with him for a couple hours of his shift. I liked it so much that I was able to get an internship,” remembers Sean.

While he admits rock is his thing, Sean says his radio name was inspired by a 60’s Motown R & B group, “If memory serves me correctly, I heard a Gladys Knight and the Pips song and thought, Sean Knight has a nice ring to it.”

After getting his feet wet at the Oldies station where he grew up in Spokane Washington, Sean made a pit stop at a Christian station in town before he would eventually work for a string of rock stations. He would move from the Northwest and travel to Minneapolis and Arizona before landing in Palm Springs. Currently he works at 93.7 KCLB, a classic/mainstream mix rock station. You can hear Sean in the afternoons from 2pm to 7pm. He has been working with the Desert Radio group since January of this year and in addition to his on-air duties, Sean also helps with production and programming.

Sean’s love for rock music goes beyond just playing it on the radio. “I started playing guitar when I was 10. I’ve been in a handful of cover bands, an original band (I actually played drums for it), and I’ve been in several tribute bands (Nickelback, STP, Green Day, Godsmack.) I have done some solo-acoustic cover gigs and written some solo original stuff. I’m also currently working on an original project.” explains Sean. Besides playing the guitar and drums, this multi-talented musician and radio personality also plays the bass and sings.

Always looking to expand his resume, Sean would like to take on the duties of the music director (MD) and Assistant Program Director (APD) as he continues his radio career. Sean is also open to booking casuals or corporate events as a solo guitarist with vocals. If you would like to contact Sean about his radio show or to book him, he can be reached at: rock945knight@gmail.com. 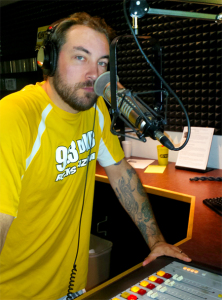