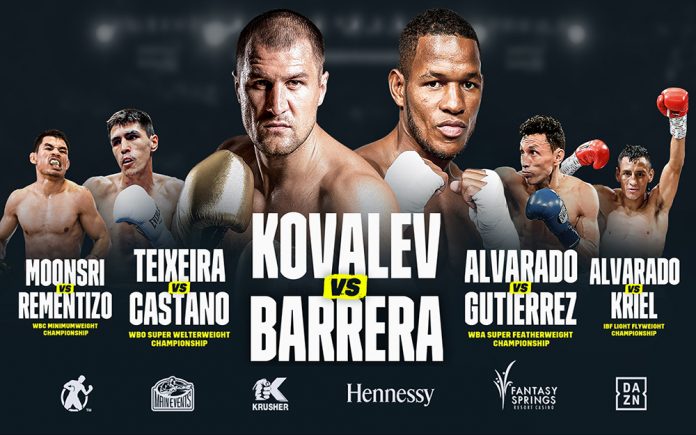 One of the most dangerous punchers in boxing history — Sergey “Krusher” Kovalev (34-3-1, 24 KOs) — returns to the ring on Saturday, April 25th at Fantasy Springs Resort Casino in the main event of a special edition of Golden Boy Boxing. The former light heavyweight champion looks to bounce back from his recent loss to Canelo Alvarez by taking on former world title challenger Sullivan Barrera (22-3, 14 KOs) in a 12-round cruiserweight battle.

The loaded fight card will feature pugilists from four continents competing for championship belts from all four major sanctioning organizations. Tickets starting at $35 go on sale Friday, March 13th at 10 a.m. at the Fantasy Springs Box Office, via phone (800) 827-2946 and online at www.FantasySpringsResort.com.

The event will be streamed live exclusively on  DAZN. 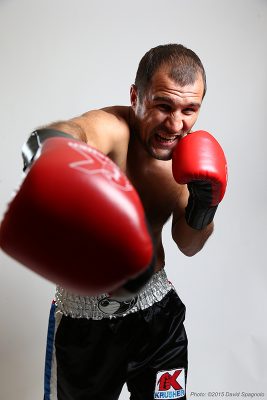 Kovalev, 36, is a three-time light heavyweight champion who captured his first world title in 2013 when he stopped Nathan Cleverly in Wales. The Russian knockout artist then unified the WBO, WBA and IBF titles with a lopsided unanimous decision victory over future Hall-of-Famer Bernard “The Alien” Hopkins in Atlantic City in 2014. Kovalev then successfully defended his titles twice against Jean Pascal and once against Isaac Chilemba. Despite setbacks against Andre “S.O.G.” Ward and Eleider Alvarez, he avenged his loss to the former and scored a technical knockout against undefeated contender Anthony Yarde. In his most recent outing, Kovalev was stopped by Canelo Alvarez in the 11th round on November 2nd in Las Vegas. 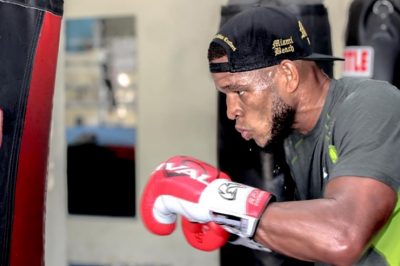 “I am happy to get back in the ring and to be on my way back to world championship bouts,” Kovalev said. “Barrera is a Cuban fighter and, even though I never faced any Cuban fighters as a professional, back in amateur days it was always Russian boxers competing with Cuban boxers, so I’m looking forward to remembering my amateur boxing. I’m very glad to be back and to bring my boxing to my fans on April 25th.”

After a spectacular amateur career, Barrera defected to the United States in 2009, and soon made his professional debut in Miami. In only his eighth fight, he captured two regional titles by defeating Frank Paines in 2011, which he followed with victories against Jeff “Left Hook” Lacy and Karo Murat. Barrera suffered his first defeat against Andre Ward, but returned to defeat then-undefeated Vyacheslav Shabranskyy and scored a decision win against Joe Smith Jr. The 38-year-old contender’s only other losses have been against Dmitry Bivol and Jesse Hart in very competitive fights, and he looks to make another run for a world title in 2020.

“This will be the most important fight of my career because I have always pursued a fight with Sergey Kovalev,” said Barrera. “I know that he has to win this fight in order to continue with his career, but the case is the same with me. It is very important to win this fight, which for me would be like becoming a world champion. That’s what it means for me to finally face Kovalev. I also want to thank Golden Boy for believing in me and my team, and for giving us the opportunity that we have always wanted, which is to fight Kovalev.”

Rene “El Gemelo” Alvarado (32-8, 21 KOs) of Managua, Nicaragua puts his WBA Super Featherweight World Title on the line against Roger “The Kid” Gutierrez (24-3-1, 20 KOs) of Maracaibo, Venezuela. Alvarado will defend his title for the first time after taking it from Andrew “El Chango” Cancio in November 2019 at Fantasy Springs, while Gutierrez is coming off a five straights wins, including an upset knockout of Eduardo “Rocky” Hernandez.

Chayaphon Moonsri (54-0, 18 KOs), a Thai boxer who currently boasts the most impressive undefeated record in the sport, defends his WBC Minimumweight World Title against Marco J. Rementizo (12-3, 9 KOs) of Misamis Oriental, Philippines in a 12-round fight.

Felix “El Gemelo” Alvarado (35-2, 30 KOs) of Managua, Nicaragua defends his IBF Light Flyweight World Championship against DeeJay Kriel (16-1-1, 8 KOs) of Boksburg, South Africa in a 12-round battle. Felix, who is the twin brother of Rene, will fight for the first time after signing with Golden Boy.

Former world champion Alberto “Explosivo” Machado (22-2, 18 KOs) of San Juan, Puerto Rico will look to inch closer towards becoming a two-division world champion when he takes on Cristian Baez (18-1, 17 KOs) of Caracas, Venezuela in a 10-round lightweight bout.