The recent boom in shared asset applications has been born out of the new economy and good old American innovation.

AirBnB originated because the renters of whole separate properties seemed to already have a number of sites on which to list rentals. AirBnB went after a niche market of rooms within homes or Bed and Breakfast type listings. Interestingly, this led to rentals that were lower priced than their rivals, albeit not as private in some cases and not necessarily luxury rentals. The economy demanded an option to those very expensive options. This was it.

The application met with enormous success, and unfortunately the company went after business on rival sites like VRBO and even Craigslist. This has attracted a whole different set of problems that the firm has not managed well given its movement away from its core business model. There have been reports of some of these rentals turned into nefarious business practices and some of these have resulted in national bad PR for the firm. In the media I have read, has been sloppy in its journalistic function, not bothering to mention that these horrible experiences have occurred in the whole separate property rentals and not in those Bed and Breakfast properties, owner on site, or room rentals that made the company into the success it is today. That needs to be debunked.

One can only hope the firm will make the distinction of the type of rentals more noticeable on their site, as the kind of renter looking for that lower rent with bad intentions ends up on their site otherwise, and that’s bad for hosts and travelers alike. Because of the tourist industry here, it’s important to explain what’s out there and how to know the difference. An informed consumer is always the best one.

This column has also covered ride sharing systems of which UBER is the only example in the valley for now. Other columns have bad mouthed the company for price gouging and aggressive or even unfair competitive practices. As an occasional UBER driver myself, I can speak from direct experience.

Both regular taxicab companies and UBER called many out of town cars into the area for Coachella as huge spikes in need do occur from like events. Rates for UBER are always competitive or better than cabs. That is possible because individuals own their own cars and pay their own insurance making UBER an asset sharing system that is more efficient and less structured than traditional cabs.

Both types of travel presented enormous difficulty over Coachella. The police made all cabs and UBER cars wait in the streets surrounding the grounds and only allowed thirty cars into the parking lots at a time for client pick-ups. I waited two hours to pick up a client for a fare of 17$. Another media outlet stated that they had seen receipts for 554$ a ride in an UBER car. That was not my experience.

When I contacted UBER about the government and authority based needs facing the extra number of vehicles in town for these events, UBER was receptive and listened carefully, and they even offered specific driving plans to help drivers avoid the worst of these issues, while still allowing for as many cars as possible to be available for festival goers. The events have all been well served, and it is only getting better. Please email questions and comments to: JohnPaulValdez@gmail.com 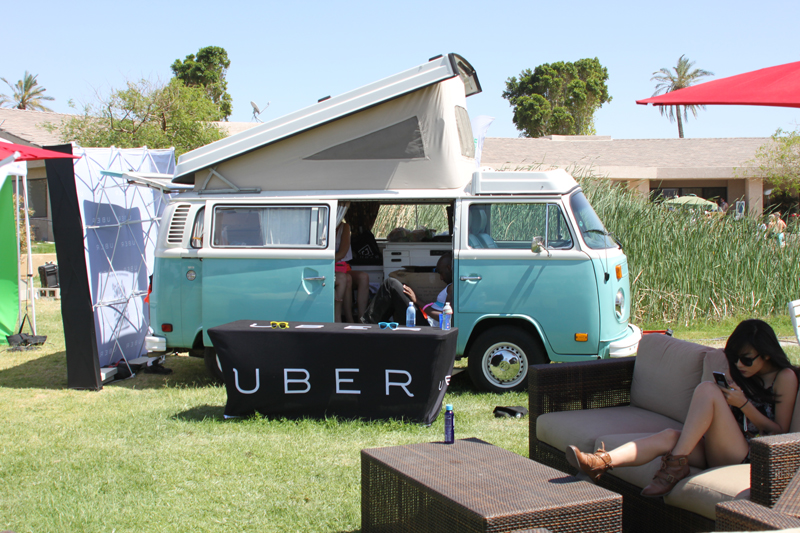