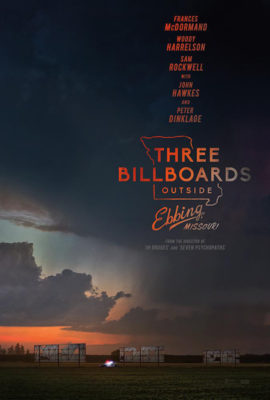 Oscar winning Writer-Director Mark McDonagh (“IN BRUGES”) has crafted one of the best films of the year.  This fabulous chunk of modern cinema pulls no punches.  It is clever, bold, angry, violent, shocking, grim and unexpectedly hilarious.

Mildred Hayes (Frances McDormand) is a divorced, single mom working in a little gift shop in the small town of Ebbing, Missouri.  Seven months earlier, her teenage daughter was raped, murdered and set on fire.  There have been no arrests.  She rents three billboards on a side road leading into town and paints these messages:  “Raped While Dying.”  “Seven Months And No Arrests.”  “How come Chief Willoughby?”  When the chief’s assistant officer, spoiled mama’s boy Jason Dixon get’s involved, the fight between Mildred and Willoughby grows exponentially in ways that are utterly unpredictable but hugely entertaining. 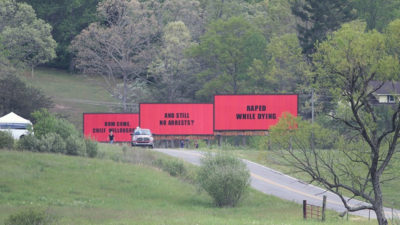 Woody Harrelson is spot on as berated Chief Willoughby.  I was fully engaged in the changing relationship between McDormand’s Hayes and Rockwell’s Dixon.  The three actors create a convincing rural authenticity that is consistently surprising and emotionally charged.  They will likely be noted when the Academy Awards© are handed out.

I laughed out loud and I wept at this angry, shocking and provocative film that examines the grace that happens when an enemy becomes a friend.  Strongest recommendation. 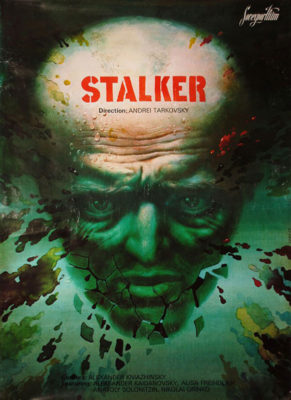 Andrei Tarkovsky is certainly among the greatest of world-class filmmakers.  His final Soviet feature film is an immersive metaphysical journey through a puzzling post-apocalyptic terrain.  It’s a cinematic experience unlike anything else.

A hired, illegal guide, whose mutant child is dreadful proof of the horrors within, leads a writer (Anatolly Solonitsyn) and a scientist (Nikolay Grinko) into the heart of the restricted, forbidden zone — the site of an ancient disaster — in search of a mythical, mysterious place known only as “The Room,” a place that is reputed to offer the immediate fulfillment of any earthly desire to those who enter.

This extraordinary religious allegory is a disturbing reflection of political anxieties that are easy to grasp – especially considering the fractured and dangerous world we now inhabit.  I love this meditation with a multitude of possible meanings.  In many ways, it’s a tone poem on the power and film itself. 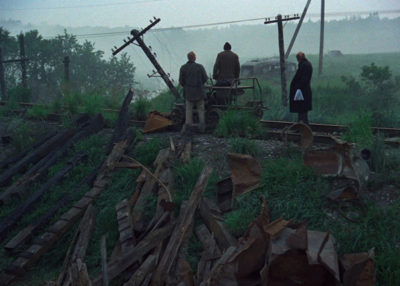 Interesting extras on this 2K digital restoration include a new interview with Geoff Dyer, author of Zone: A Book About a Film About a Journey to a Room.   Also, fascinating interviews with set designer Rashit Safiullin, composer Eduard Artemeyev and cinematographer Alexander Knayazhinsky.

This is a must have for any serious film buff.  Tarkovsky is a towering genius whose eye for composition was as finely tuned as his understanding of film’s power as metaphor for life itself.  Criterion.  Blu-ray.