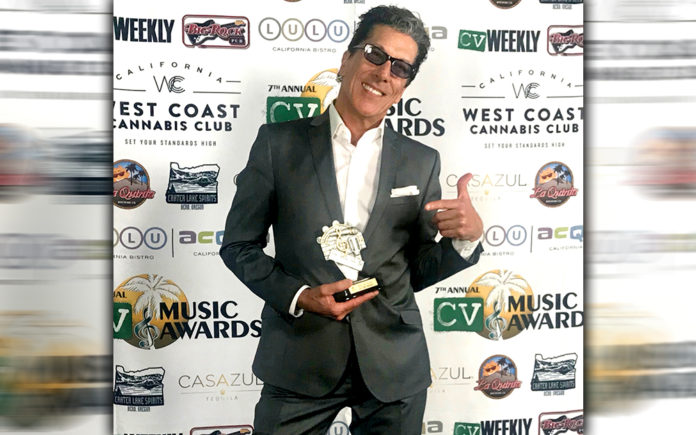 Slim Man will acknowledge; he does nothing easy. The smooth Vocal Jazz singer and songwriter is based in Palm Springs by way of Baltimore, Maryland. He moved here in 2014 and has arduously built a faithful following through his music, cooking, writing and podcast. His fanbase, AKA ‘Slim People’, showed up in droves to vote Slim Man the ‘Best Jazz Vocals’ winner at the 2019 CVMAs.

On Wednesday, December 11th, Slim Man will release his Slim Man LIVE at Vicky’s! double CD. The Slim Man Band will be celebrating with a CD release party at Vicky’s of Santa Fe at 45100 Club Drive, Indian Wells, CA 92210. The double album includes 28 songs pulled from over 4 hours of music recorded in June 2019 on a 24 multitrack console. Slim Man has a diverse catalog of music available on his website.

The first Slim Man release, End of the Rainbow, was released in 1995 and is more R&B with the Jazz and Soul hit Faith In Us. His most recent release, Young at Heart (2017) is on the swinging side of things and includes the masterstroke standards The Best Is Yet To Come and Nice ’n Easy.

Coachella Valley Weekly had the opportunity to speak with Slim exclusively to break the news of his new double album and learn more about one of the desert’s best improvisational musicians.

CVW: Congratulations on your award and new album. What’s next for Slim Man?

SLIM MAN: “We’re excited on the release of the new double LIVE CD coming out, Slim Man LIVE at Vicky’s! and the CD release party at Vicky’s on Wednesday, December 11th.”

CVW: What were your feelings after learning you had won the 2019 CVMA for ‘Best Jazz Vocals’? 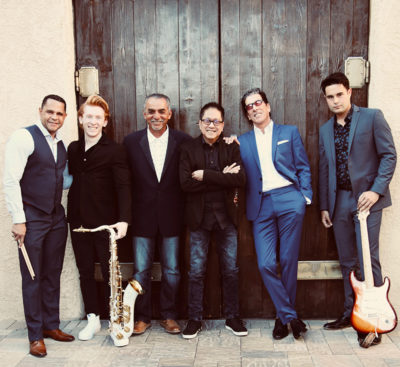 SLIM MAN: “I was…ecstatic. Joyous! I had some serious vocal problems a while back and wasn’t sure if I could ever sing again…seriously. Doctors wanted to operate, but they weren’t sure if it would be successful. I didn’t want to go through with it. I finally found a doctor who took a different approach. He put me on complete vocal rest for a month. Not a word or even a whisper. When I started singing again, my voice wasn’t as strong. It took quite a while to get it back in shape, but I kept working on my singing and gradually got my strength and stamina back. And now I can sing for three hours without any problem at all. So winning the award after all that really meant a lot to me.”

SLIM MAN: “A hundred years from now, if people listen to a Slim Man CD, I hope it brings a smile to their face, a little joy to their lives, and a little love to their hearts. It’s all about love!”

CVW: You were nominated along with Symara Stone, Keisha D, Deanna Bogart, Johnny Meza, Meagan Van Dyke, Yve Evans, Diane Schuur, Rebecca Clark, & Bob DeSena. What can you tell me about these artists and what message would you like to send them?

SLIM MAN: “What a very talented group of wonderful people. It’s an honor to be included among them. I consider these folks my friends. And the message I’d like to send them is this…please retire or move to a foreign country before the next awards! Just kidding! I wish them all the best.”

CVW: The Slim Man Band is Craig Chesnut on drums, Enrique Hernandez on percussion, Chase Huna on sax, Nick Sosa on guitar and the Thrilla from Manila, Tateng Katindig on piano. Tell us more about your band.

SLIM MAN: “The first time I met Tateng was right before showtime at a Slim Man concert in Temecula, CA. We went on stage having never played together and Tateng was brilliant and magical. Craig joined the band after our drummer at the time got thrown in jail! True story. Craig subbed that night and was amazing. I was doing a Jazz jam a few years ago and Chase came up and sat in and played like a champ—with no rehearsal. Nick? I saw some homemade videos online of him playing solo guitar and was so impressed I asked him to sit-in with us at Vicky’s and he blew us away. Enrique used to play percussion with me in NorCal and when he moved down here last year, I asked him to come out and play with us at Vicky’s, and he nailed it and fit right in. A band was born!”

CVW: Tell us about your upcoming performances at Vicky’s of Santa Fe in Indian Wells, CA.

SLIM MAN: “We play for 3 ½ hours every Wednesday night. We do a combination of Slim Man songs and some cool covers. I’m constantly challenging the band to do better, play better and be better. We’re always learning new songs, expanding the repertoire and honing our sound. I like to keep things spontaneous; it keeps the band on their toes! I call out the arrangements and the solos as we go along, it keeps the performances fresh. After every show at Vicky’s, I write the band an email. I tell them in detail how we can improve. And I constantly remind them about the most important thing in the music business…nice hair!”

CVW: Why is it important to carry on the tradition of Jazz music and what can the community do to support Jazz in the Coachella Valley?

SLIM MAN: “My favorite thing about this music is the improvisation. Not many other styles have that element. It’s a tradition worth carrying on! And everyone in this band is a stellar soloist and impressive improviser. The people out here do a great job of supporting the music. They come out in full force and they really listen.”

CVW: You’re an avid chef & author as well. Your cookbook includes stories, cooking video tutorials and your music (physical and digital versions). What are the correlations between food & music?

SLIM MAN: “Whether I’m making music or cooking, I like to get creative. For instance, the other day I wanted to make some manicotti, but instead of laying it down on its side the traditional way, I stood it up like a chimney. Instead of stuffing it with ricotta cheese, I decided to stuff it with shrimp and scallops in a spicy tomato sauce. I call it Slim Manicotti! I approach music the same way. What if you combine some Jazz chords with an R&B beat? Or write a Pop song with a Swing beat? In food and in music, you need to be creative and original. And you need to make sure nobody gets sick!”

SLIM MAN: “I love how this magazine supports the music; all kinds and styles, all ages and varieties. It’s a rare and beautiful thing. Thank you!”