I recall it as if it were yesterday. The four of us out in the backyard, are eyes huge with wonder as white flakes fell from the sky. We huddled together in the cold, my parents, my sister and I. It was as if we were witnessing a miracle, and in a way we were.

It was 1986, and it snowed in the desert. We lived in South Palm Desert, near the Living Desert Botanical Gardens. It was the midst of our desert winter. That was the last time that snow fell on the low desert floor.

The time before that was in 1979, and was much more measurable. A huge storm had cast a holiday like white blanket atop our desert floor. It was quite the site to see.

It was enough snow to ball up and throw playfully at one another. And who knows, if you strapped on some skies, you probably could have slid through the streets of downtown Palm Springs for a little cross country action.

There were other times that the desert has encountered the cool powder, dating back to the 1930’s. But I’m sure there have been many other times before that, which are just not registered. The fact is, is that it can get pretty darn cold in the Coachella Valley. We have experienced severe frosts and bone chilling temperatures. Although I’m sure it’s nothing compared to the serious freezing temps that our Canadian and east coast friends go through. But then again, they don’t go through 120 degree temps like we do in the summer, so I guess it’s all relative.

Personally, I relish our little winters…which are more like fall to most of the country, but for us, it is winter.

It is pushing almost 30 years since our last snowfall, and while we can look up at the Tram to see a bit of snow, there’s nothing like seeing it in your own backyard. Who knows, maybe this is the year for snow to return to the Coachella Valley…winter has just begun. 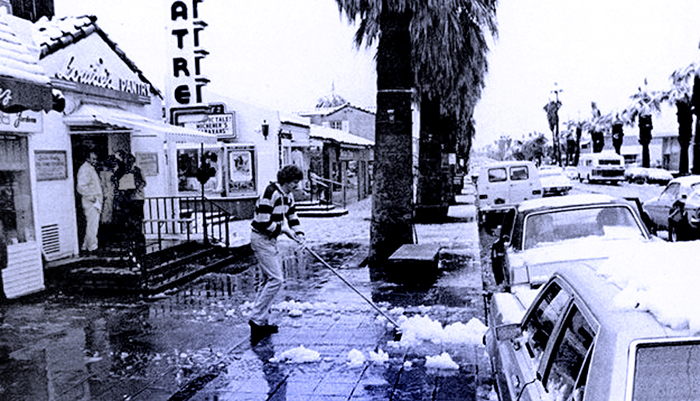