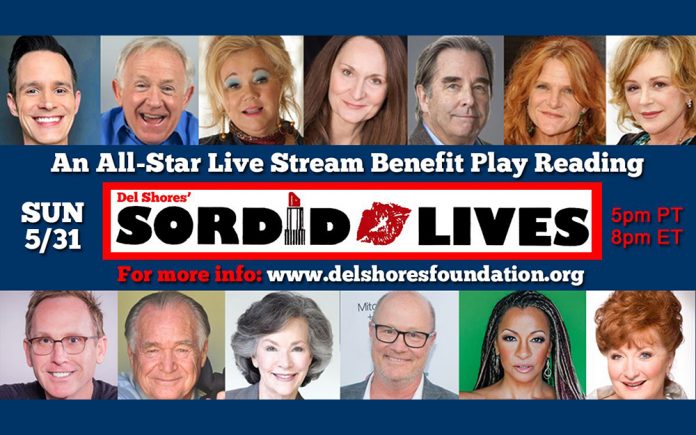 What makes a great play?  It starts with an amazing script.  A play can be produced a multitude of times, in black-box theatres and thousand seat arenas.  It can feature well known performers or local talent.  Yet regardless of venue or performers, a well written script will always prevail upon any stage.  Such is the case for playwright Del Shore’s classic black comedy, “Sordid Lives.”  In 1996 Shores, script made its world debut in a 64 seat theatre in Los Angeles and ran before sold out audiences for thirteen months, winning thirteen Critics Choice Awards.  It has since been produced in over 300 theatres nationwide and in 2000 was adapted into a film featuring an all-star cast, Bonnie Bedelia, Beau Bridges, Delta Burke and Olivia Newton-John.

Del Shores, has written seven previous plays, all published by Samuel French, produced thousands of times worldwide with four adapted for the screen which have run collectively for over seven years in Los Angeles.  His play, “Southern Baptist Sissies” won the GLAAD Award.  “The Trials and Tribulations of a Trailer Trash Housewife,” won the NAACP Theatre Award, and both Yellow and Trailer Trash won the LADCC Award for Best Original Play and Best Production.

Shores, hit show “Sordid Lives,” is described as a black comedy about white trash as a gay actor struggles to come out to his eccentric, dysfunctional Texas family. When the family matriarch trips over the two wooden legs of her lover in a seedy motel room, her funeral brings three generations of the family back together in a story about learning to love the family you have as they are, not as you wish them to be.

A live reading of “Sordid Lives,” will be live streamed on YouTube and Facebook on Sunday, May 31 at 5pm Pacific/8pm Eastern, hosted and produced by Emerson Collins and Del Shores. The reading will star some of the cast from the original 1996 play, the cult-hit 2000 film, LOGO’s 2008 “Sordid Lives: The Series” and the 2017 marriage equality-themed film sequel “A Very Sordid Wedding.” The free live stream reading and accompanying auction of Sordid Lives memorabilia is a benefit fundraiser for twenty- three live theatre companies who are associated partners of the Del Shores Foundation and support its mission to find and facilitate the development of new southern queer artistic voices. All of the artists are donating their time and 100% of proceeds will go to the partner theatre companies, such as the Desert Rose Playhouse. (www.desertroseplayhouse.org)

The Producers of this live stream performance is The Del Shores Foundation, a 501c3 non-profit with a mission to find and facilitate the development of new southern queer artistic voices through bringing together artists and working professionals, amplifying new work and connecting artists to platforms for the creation of their work. The Foundation will present a one-night-only benefit reading of the original Sordid Lives, play by Del Shores for a #SordidLiveStream.  One of the theatres who will benefit from this performance is the Coachella Valley’s lgbtq theatre, the Desert Rose Playhouse. Artistic Director, Robbie Wayne stated that, “We are participating with this event as a part of an earlier agreement we made with Del Shores at the first of the year to be part of select theatre companies that help produce new content at our locations.”

The Del Shores foundation website explained how this performance came about. “Several weeks ago, Del had a conversation with the artistic director of one of the foundation’s theatre partners. They explained that the challenges of the pandemic have put their company’s viability in jeopardy.  Since Del started his career in, and always returns to, the theatre, he was inspired to figure out a way to use our skills to do something to help theatre companies and also provide entertainment.  This livestream benefit reading was the result of that.”

Sordid Lives, will live stream Sunday, May 31 at 5pm Pacific/8pm Eastern. The reading is free and reminders can be set for the livestream on
YouTube here: https://bit.ly/2Lu9VMz