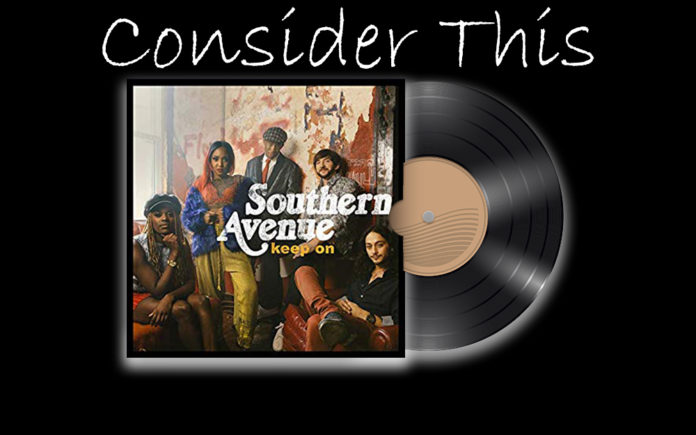 Memphis, Tennessee is known for many things, barbeque (obviously), the center of the Civil Rights movement and as a musical melting pot. Blues, Jazz, Country, Gospel, Rock N’ Roll, R&B and Soul, have co-existed and coalesced for more than a century there.  By 1900, Beale Street became the city’s recreational and cultural center. Record labels like Sun, Stax, Hi and Ardent flourished from the ‘50s through the ‘70s. Everyone from W.C. Handy, Muddy Waters, Elvis Presley Booker T. & The MG’s, Al Green, Big Star and Justin Timberlake got their start there. Carrying that musical torch into the 21st century is the band Southern Avenue. The electrifying five-piece has just released their second album, Keep On.

Gifted guitarist Ori Naftaly grew up in Israel, nurturing a deep and abiding love for American Soul, Funk and Blues. In 2011, he recorded his debut, A True Friend Is Hard To Find, with The Ori Nataly band. A year later, at age 25, he won the Israeli Blues Competition and was voted Best Israeli Blues Band in 2013. That led to an invitation to compete in The 29th International Blues Challenge in Memphis. He released a couple more albums and relocated to the United States. Around that time he met protean singer Tierinii Jackson.

Tierinii and her younger sister Tikyra are Memphis natives and grew up in a strict, religious household. Both parents were ministers and the sisters and their siblings displayed musical talent early on in church. Secular music was strictly forbidden, and it wasn’t until late adolescence that the girls discovered seminal artists like Aretha Franklin, Michael Jackson and Mariah Carey, which led to Marvin Gaye, Prince, James Brown and Beyonce. Tikyra, (who goes by TK) began playing drums at age nine and counts Nikki Glaspie of Nth Power as a critical influence.

By the time Ori connected with Tierinii, she had cycled through countless cover bands and was itching to write her own music. The pair connected professionally and personally. When TK came on board they had the nucleus of the band. Their line-up was complete when they added Jeremy Powell on keys. Original material came together pretty quickly, and they began playing around town.

As fate would have it, a record executive from the Concord Group (Telarc, Hear Music, Fantasy, Stax), caught their last set at a club and offered them a record deal. The band’s self-titled debut was released in 2017, hitting the top of the Blues, Americana and iTunes Blues charts. They have since toured the world and the U.S., playing clubs and festivals, winning new fans with their incendiary live set. They’ve shared stages with like-minded artists like Buddy Guy, Los Lobos, JJ Grey & Mofo, Umphrey’s McGhee, North Mississippi Allstars and Karl Denson.

When it came time to return to the studio, the band added guest bassist Gage Markey. They also hunkered down at Sam Phillips Recording (the facility Sam built to supplant his original Sun Studios, these days overseen by his son, Knox) and enlisted producer Johnny Black (Daughtry, Estelle, Jesse J). The result is their new album Keep On.

The first two songs set the tone for the whole record. The title track jumps out of the speakers quickly locking into a gutbucket groove. Flirty keys, stinging keys and brassy accents pulsate over a rhythm that pivots from stompy to handclap. Tierinii’s sultry vocals rise above the fray and empowering lyrics act as a mantra of personal perseverance; “You’ve got strength but it don’t matter ‘cause every war’s got a million battles/And you gotta want the fight as much as you want the win, you gotta find the reach and grip through the pain.”

“Whisky Love” is a sharp treatise on the powerful grip of addiction, whether it be emotional or chemical, sometimes the ebb of one feeds the flow of the other. Wah-wah guitar rides roughshod over swampy keys, roiling bass and a snap-back beat. Despite the authority in her voice, Tierinii is clearly feeling the consequences; “Love of my life, he killed my spirit, now a shot of brown for a broken heart to heal it…robbed me of my youth, strike me if I move, so I fill up my cup until I find my courage.”

Although most songs here attempt to parse the tricky rituals of romance, for Southern Avenue, the personal is political on both “We Are Not So Different” and “We’ve Got The Music.” The former is something of a 21st century “We Shall Overcome,” anchored by a stop-start beat, slinky guitar, shaded organ, mellotron and Wurlitzer notes. The lyrics acknowledge that the schism along racial lines continues to widen. Even in today’s wildly divisive climate, our similarities outweigh differences. Tierinii’s vocals become more plaintive as she pleads her case; “We are not so different you and I, regardless of who’s privileged, we’ve all got our rights, they provoke division and then we fight, giving them the power, they shade our sight.”

The latter weds chicken-scratch guitar, punchy horns to a kick-drum beat. It also features a vocal assist from Soul legend William Bell. A stalwart on the Stax label, he wrote and performed classic cuts Like “You Don’t Miss Your Water,” I Forgot To Be Your Lover” (a massive hit for Billy Idol in 1986 as “To Be A Lover”) and “Born Under A Bad Sign.” His silky tenor wraps around Tierinii’s tart harmonies before the pair trade verses that seek common ground through the universal appeal of music; “If you don’t look like me, if you don’t talk like me that’s alright, we’ve got the music/If you don’t know my face but you’re feeling the sound, that’s alright, we got the music.” Clocking in at just under two minutes, it’s short and sweet, but succinct and to the point.

Meanwhile, “Too Good For You” is a bitter kiss-off camouflaged by a Countrified arrangement that feels as easy-going as a Sunday morning at Lionel Richie’s house. It’s powered by a stutter-step beat, jangly guitars and frisky interplay from keys, mellotron and Fender Rhodes. The Harmonies stack sweetly as the lyrics cut to the quick; “You ain’t even half, half the man I need, proved yourself real dumb with your insecurities/Your idea of love don’t measure up to me, you ain’t capable of fulfilling my needs, you’re lacking in ambition, got no passion, you ain’t Shit without me.” Don’t sugarcoat it, Tierinii, say what you think.

Southern Avenue collectively gets on the Good Foot with “Switchup.” Funkified bass lines collide with a whip-crack beat, sinewy guitar and fluttery horns. Here Tierinii cautions a prospective suitor, “I bend, but baby I don’t break, I move, but baby I don’t change.” Everything gets thick and greazy on the break, and the band cedes the spotlight, shining it on the taut timekeeping of Tikyra.

Finally, “The Tea I Sip” gets down to the nitty gritty. Tierinii’s mien pivots from playful to steely. Mirroring her mood, the beat shapeshifts from lowdown to hopscotch, from start-stop to finger-poppin’. Sidewinder bass and synchronized horns punctuate each hairpin turn until Ori unleashes a cross-cut solo.

Other interesting cuts include the back-to-back juxtaposition of “Lucky,” a sharp fusion of beatific Soul and crunchy AOR with the frenetic Uptown Funk of “Jive.” The lyrics of the latter include this potent and thought-provoking couplet; “The power of knowing is knowing your power, knowledge without wisdom is a fail.” The electrified stomp of “She Gets Me High” is a crackling ode to sexual fluidity.

The album closes with “We’re Gonna Make It.” The song shares the same grit, grace and gravitas as Sam Cooke’s epochal “A Change Is Gonna Come.” 45 years on, sometimes it feels like Equal rights in America is back to square one. But Southern Avenue asks that we stay patient and positive; “I told my people don’t be worried so, for every high I know we get low, just don’t let go/We’re gonna make it, we’re gonna make it, anyhow, anyhow.” Equal parts spiritual, solemn and sanguine, it’s a strong finish to A great album.

In this era of disposable music, autotune and K-Pop, Southern Avenue feels like a breath of fresh air. It almost takes the sting out of monumental losses like Sharon Jones and Charles Bradley. Keep On honors the traditions, but adds a 21st century twist. Amen to that.