Is there anything more important to sustaining life than water and energy?  Love maybe.  But the love was not present at the Southern California Energy & Water Summit held at the Palm Springs Convention Center last week.

Sponsored by Burke Rix Communications and The Desert Sun, the event drew industry professionals, politicians, environmentalists, businesses and laypeople to discuss the state’s historic drought, energy mandates, sustainability and the plight of the Salton Sea.

This year’s discussions and panels were dominated by the water crisis and the solar energy boom.

California has 6,000 megawatts of solar power on the grid and according to Keynote speaker Jonathan Weisgall, Vice President of Legislative and Regulatory Affairs for Berkshire Hathaway, will be up to 10,000 megawatts soon, shortly followed by 12,000 megawatts.

“Where five years ago the message was don’t run your dish washers or pool pumps, wait until nighttime because that peak time during the day is when we have to conserve.  Today, it is exactly the opposite!” said Weisgall.  “With so much solar on the grid, California is forced to curtail some of that energy.  It can’t be dispatched, can’t be sold and can’t be used.”

An Energy Imbalance Market is what Weisgall suggests as an answer for the problem of how to better handle renewable energy resources.   “Creating a larger geographic footprint with other utility companies, allows solar to be sold elsewhere.  And California can buy power as needed,” said Weisgall.

Across the western states, six utility companies have joined the Energy Imbalance Market with others committed to coming on board that include companies in Idaho, Oregon and Washington state.

As a public utility, the goal is to supply electricity that is affordable, reliable and sustainable.  Weisgall reported that the Energy Imbalance Market does all three “remarkably” well.

“From an affordability point, our company saw immediate benefits by being able to more efficiently utilize power renewable energy resources,” said Weisgall.  “In the first eight months, we’ve seen $21.5 million in benefits both for California customers and for our Pacific locations.

“The sustainability point is an obvious one by capturing the benefits of greater energy diversity and optimizing the use of renewable energy,” Weisgall said.  “There are reliability benefits as well because there is a greater operational awareness among the different balances and authorities as you go across larger portions of the western grid.”

Weisgall pointed out that the “beauty” of the Energy Imbalance Market is that no federal or state legislation is needed; there is no steel required in the ground; it takes only a memo of agreement with Cal ISO and to file with the federal regulatory commission in Washington.   “We think this will transform the market,” Weisgall said.  “It’s good for renewables, good for customers and good for the over-supply problem in California with solar.” 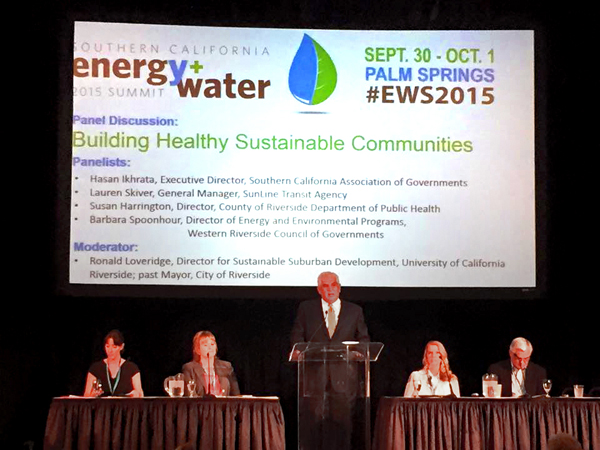 Nichols explained that of Edison’s 130,000 customers, three percent have rooftop solar, producing 678 megawatts.  During peak hours between 2-4:00pm, 22,000 to 23,000 megawatts are needed.  “We expect to see in the next decade 10 to 15 percent renewables in our portfolio,” Nichols said.  “By 2030 the goal will be fifty percent and I would expect up to sixty-five percent.  That’s a huge, huge, impact.  There’s a lot of things we need to do to make our system ready.”

This week the California Public Utilities Commission started hearings regarding proposals from Edison and other Southern California public utilities to charge solar users for their connection to the grid.

Currently net metering is allowed for rooftop solar.   The utility company credits solar users for the surplus power fed into the grid.   Utility companies are proposing a reduction in the credit, and to include charging a monthly fee based on the size of the homeowner’s solar system.   Without mentioning the hearings, Nichols defended Edison’s position to charge solar customers for the upgrade and maintenance of their infrastructure.

After Arizona’s utilities passed a similar policy, applications for rooftop solar dropped from hundreds to a handful.

Air Quality Management District Director Wallerstein said more electrification was important to meet the new standards set by the state.  “You can’t talk about clear air and public health without talking about the energy landscape,” Wallerstein said.  “The goals for greenhouse gases and emissions set by California — the time tables to meet those goals — have been moved up by the efforts needed to meet the Federal Clean Air Act.  It comes down to our choice of energy selection and how we use those energy sources.  We need to move to near zero and zero emission standards, especially in transportation.”

Wallerstein applauds all that has been done and encouraged everyone to work together because although progress has been made, five thousand people die prematurely [in U.S. or California?] every year from air pollution.  “To be part of the energy team is to be part of the clean air team,” said Wallerstein.

Discussion regarding the Salton Sea, one of the sponsors for the Energy & Water Summit, became heated during another panel discussion.

The Salton Sea is facing collapse.  As the water evaporates, accumulated toxins will be dispersed jeopardizing the air quality and health of not only CV residents, but those beyond our valley.   With the Sea’s demise comes a biodiversity breakdown.  The Salton Sea is a major bird habitat and estuary.

The fight is between the Imperial Irrigation District (IID) and a 2003 agreement to share water with the Coachella Valley as part of the Salton Sea restoration plan.   IID’s General Manager Ken Kelley, upset from the lack of action by the state, threatened to keep water from its neighbors in the CV as well as San Diego County.

Assemblyman Eduardo Garcia was on the panel and encouraged everyone to get along and that infighting is a set-back, which only further stalls efforts to restore the Salton Sea.

The Summit included a fascinating bus trip that gave a detailed tour of the valley’s water sources and the water-energy connection.   Sites included a Palm Springs Groundwater Well, Whitewater Canyon Hydroelectric Plant, Coachella Canal and Farm, and the Ion-Exchange Plant.

The Desert Water Agency showed those on the tour that the level of the water in the aquifer is up by 27 feet.  Conservation, recharging and active management makes the Palm Springs area aquifer one of the best in the world.

In the lobby of the Convention Center, the Green Consumer Expo had a much brighter disposition.  Vendors and students cheerfully presented their wares and work.

Thirty-six students of the Renewable Energy Academy of Learning (REAL) from Desert Hot Springs High School showed off their award winning projects.  Enthusiastic and knowledgeable, the students were happy to be a part of the summit.

Desert Mirage High School students participated with their presentations on how to save energy and a group of students from Rancho Mirage, calling their non-profit organization Invisible Sea, will announce its plan this week to save the Salton Sea.

The enthusiasm, interest and optimism of the young people was refreshing after so much of the summit seemed to be about how utility companies can maintain profits and build new business with the changing nature of the renewable energy market and conservation.   It appears consumers will be charged more for using less.

There may not have been a lot of love at the affair, but the Energy & Water Summit is an important and significant event for the valley and state when it comes to understanding the rapidly changing nature of energy production and consumption.  Generally, participants in the summit acknowledged that the Coachella Valley is at the forefront of renewable energy and a leader in water management.

Lets hope the summit can continue to bring about dialogue and the necessary positive changes to make life in the CV, the state and the planet a more beautiful thing.