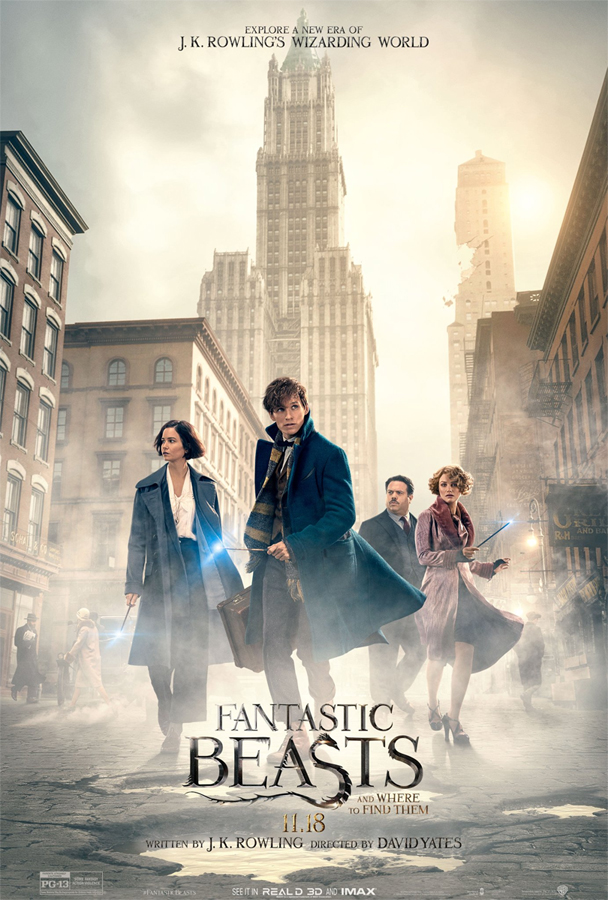 FANTASTIC BEASTS AND WHERE TO FIND THEM

No longer set in Great Britain, this new story based in the world of Harry Potter unfolds in 1926 New York decades before Harry and his pals enrolled in Hogwart’s wizard academy.

The movie tracks Newt Scamander (a terrific Eddie Redmayne) a magical zoologist who arrives in the Big Apple with a suitcase full of fantastic and strange creatures and gets involved with a hidden world of wizards and witches.

Shortly after Newt arrives in the city, one of his menagerie escapes creating mayhem and then his suitcase get switched but by the time Newt realizes it he’s in the custody of Tina (Katherine Waterston) a security officer with the Magical Congress of the United States of America (MACUSA) who helps Newt hunt for his suitcase.  More people get involved with the hunt hoping to keep secret the outbreak of magic in Manhattan.  Percival  Graves (Colin Farrell) shadows the hunters while pursuing his own mysterious agenda

The movie’s title is taken from Scamander’s fictional book, it’s required reading at Hogwarts, and mentioned in Rowling’s “Potter” novels.  Rowling herself wrote the screenplay.  She and Warner Bros report this is the first of five movies in what is essentially a new franchise that has roots in Harry Potter’s world.  David Yates, who directed the last four “Potter” movies, guides Fantastic Beasts with the same finesse and attention to detail as his other films.  The lavish richness of the cinematic world Scamander enters is reason enough to see this on a big screen.  And then there are the curious creatures themselves.  The magical creatures include nifflers, bowtruckles and erumpents.  Scamander carries a suitcase for his menagerie.  The suitcase is a kind of wormhole into another dimension where one can find whatever habitat one desires.   I was surprised at the arrival and appearance of white-faced platinum haired villain Gellert Grindelwald. Surprised not just by the villain himself but the actor portraying him.  Besides Redmayne, the exceptional cast includes Dan Fogler, Alison Sudol. Ezra Miller and Samantha Morton.  Now playing at the Mary Pickford Theater.  Recommended. 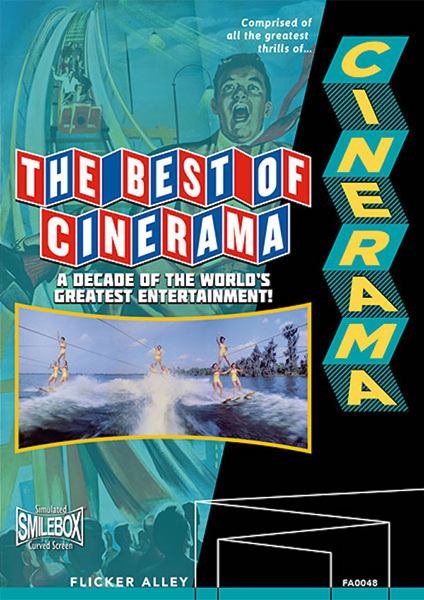 Most movie lovers of a certain age vividly remember the visceral and immersive thrill of their first Cinerama movie experience.  For some movie buffs, that ultra wide-screen memory goes all the way back to the early 1950s. The great and novel appeal of the format was that the super sharp projected image nearly filled one’s field of vision and the crisp sound seemed to come from all directions.  The resulting affect created an eerie thrill of virtually being transported to another place whether riding the roller coaster at Coney Island or skimming Tahitian breakers in an outrigger canoe. A perfect format for travel adventures!

Flicker Alley has restored to Blu-ray two vintage titles to its Cinerama collection: The Best of Cinerama and Cinerama’s Russian Adventure.  The former title is comprised of Cinerama’s greatest set pieces and sequences, from Coney Island’s roller coaster to La Scala, Milan, for Aida; from the hurtling bobsled run, to the exuberant dances of the African Watusis. Made up of over 20 such fun highlights, the film is not only an historic compilation, but also a stand-alone “thrill-a-minute” experience.

The adventure begins with the Sabre jet precision flying team from Search For Paradise, and then whirls back to the iconic roller coaster sequence from This Is Cinerama — newly restored for this release. From there, the three-panel journey goes global, showcasing some of the rich and exotic locales of Cinerama Holiday, South Seas Adventure and Seven Wonders of the World. There’s the Marian Year Celebration at St. Peter’s Square in Rome, featuring the first commercial motion-picture footage of Pope Pius XII. There’s the boat trip down the Ganges River at Benares. There are visits to Paris, Vienna, Athens, India, Brazil, Japan, Africa, Israel, and New Orleans, all in one spectacular Cinerama presentation.

For ultimate home viewing on a large hi-def screen, the movie can best be enjoyed in the Smilebox® Curved Screen Simulation. The film has been digitally remastered from original camera negatives.

This edition celebrates a decade of Cinerama filmmaking, and over five years of bringing those treasures back to life on Blu-ray and DVD for future Cinerama audiences to enjoy!  In some scenes, the three-panel image is rendered almost seamless.

CINERAMA’S RUSSIAN ADVENTURE brings together some of the most exquisite, jaw-dropping and beautiful sequences from over six Soviet Kinopanorama productions (the Russian equivalent of three-panel Cinerama.  The film’s locations stretch from one end of Russia to the other, from the snow-covered countryside to the majestic subways of Moscow, from the deck of a whaling ship to the front seat of the Bolshoi Theater.  Bing Crosby, seemingly an odd choice for narrator, uses his mellifluous voice to good effect offering both a grand and intimate view of a country and culture we still consider in conflict with our best American values.  It helps to remember this film was produced in 1966 when the cold war still had heat.  Flicker Alley.  Blu-ray. 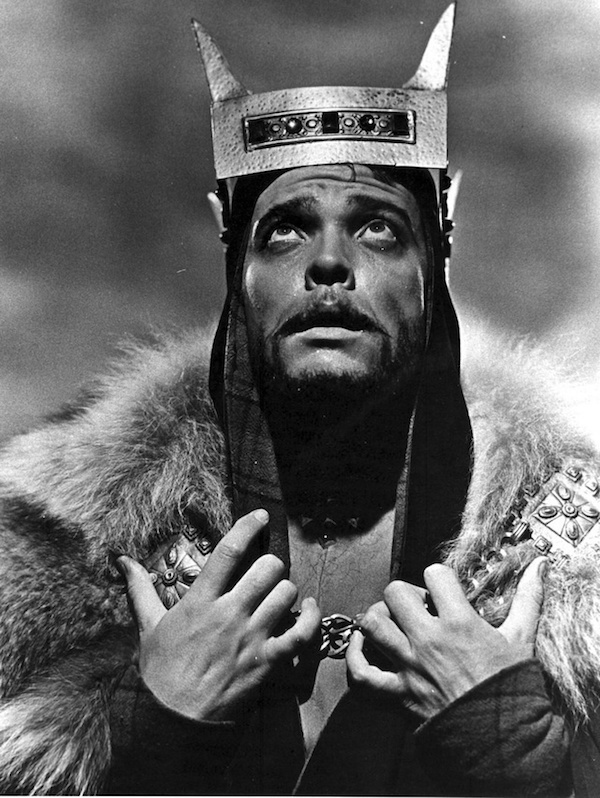 Something wicked this way comes in Orson Welles’ brilliant cinematic retelling (he adapted, directed, produced and starred).  This movie version of Shakespeare’s great “Scottish play” about the doomed Scottish lord tragically undone by his own ambition is more than a visually stunning, noir-tinged interpretation.  It boils over with supernatural prophecy and murderous intrigue, masterfully mixing stark shadows and oblique camera angles to achieve an ominous and pervasive sense of a land in peril. Beautifully shot by John L. Russell (Psycho), this special Olive Signature edition of Macbeth is an altogether unique interpretation.  It includes both the original 1948 107-minute cut, with its affected highland accents, and the 1950 pared-down 85-minute re-release that removed most of the accented dialogue.  I prefer the original ’48 edition with the enhanced accents.  I also like to use subtitles so I can read Shakespeare’s words as I hear the exacting and poetic dialogue.

From director Fede Alvarez and the twisted minds behind EVIL DEAD comes the terrifying, critically acclaimed movie hailed as “the best American horror film in twenty years.  The film debuted as #1 at the box office and remained in the top spot for two weekends in a row.  The movie follows a group of thieves (Jane Levy, Dylan Minnette, Daniel Zovatto) who break into a blind man’s home thinking “easy pickings.  When the blind man reveals a dark side (no pun intended), the trio quickly discovers they were dead wrong.  Director Alvarez takes the viewer through five featurettes including “No Escape,” “Creating the Creepy House,” “Meet the Cast,” “Man in the Dark” and “The Sounds of Horror.”  In addition the Blu-ray disc includes eight deleted scenes with optional commentary and full feature commentary with co-writer Rodo Sayagues and actor Stephen Lang.