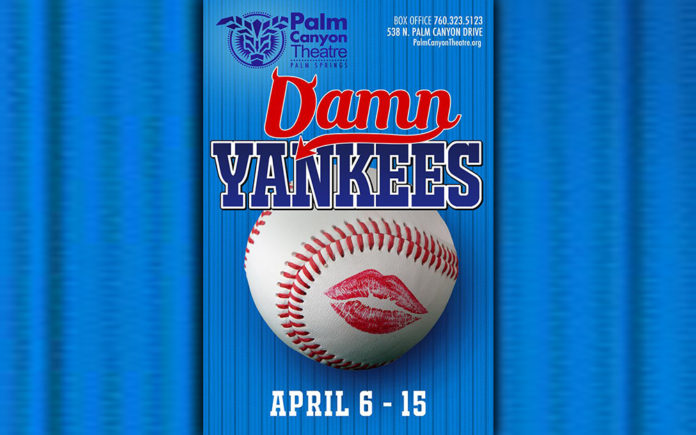 1955 started on a Saturday.  Dwight D. Eisenhower was President.  The Average monthly rent was $87.00.  Minimum wage was $1.00/hr.  A gallon of gas cost 23 cents and the cost of a theatre ticket for a Broadway show was $2.30 for the balcony and $4.90 for the Orchestra.  And on May 5, 1955 a musical comedy opened on Broadway at the 46th Street Theatre titled, “Damn Yankees.”  Book by George Abbott and Douglass Wallop, music and lyrics by Richard Adler and Jerry Ross.  “Damn Yankees,” went on to win 7 Tony Awards that year and was a critical success.  Yet sixty-three years after the Broadway premier, it may be time to retire this classic.

The Palm Canyon Theatre has a reputation for excellence in producing stellar productions of Broadway shows, yet their current production, “Damn Yankees,” just seems tired and past its prime. 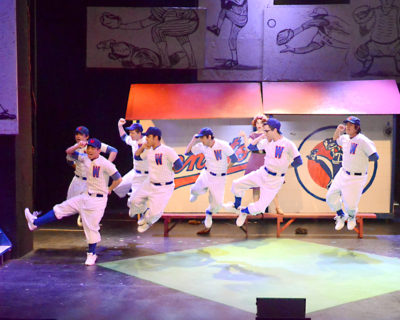 “Damn Yankees,” is a contemporary spin on the sixteenth century German legend of Faust, a man who was unsatisfied with his life and made a deal with the devil to trade his soul for knowledge and unlimited pleasures.  “Damn Yankees,” features middle aged Joe Boyd as a diehard baseball fan of the Washington Senators, who keep getting beaten by the New York Yankees.  Boyd wishes his team could just get one “Long Ball Hitter” and win against the Yankees.  Suddenly the chance to make his wish come true materializes as the cool Mr. Applegate, (Satan,) performed by Paul Grant, appears and offers Boyd the chance to be young again and become the hero of the Washington Senators as the super talented player, Joe Hardy.  I admit that the slick, quick change of the middle aged Joe for the young Joe was smooth and a fun moment in the show, though unfortunately it didn’t compensate for a story that was slow and predicable.

Nicholas Sloan, as Joe Hardy, was definitely the highlight that this show needed.  He was engaging, talented, personable and so empathetic as the young man who was slowly realizing what he had lost in this deal.  Allegra Angelo, as Lola, the stereotypical femme fatale, was sexy and fun to watch.  Both Sloan and Angelo had great chemistry and truly wonderful voices as they belted out the classics, “What Ever Lola Wants,” and “Two Lost Souls.”  Mary Ewing, as Meg Boyd, portrayed ‘the woman he left behind,’ with such longing and tenderness that it was impossible not to empathize with her pain.  SE Layne’s, direction was creative and indicative of great imagination.  Anthony Nannini’s choreography, (based on original Bob Fosse choreography) certainly brought some life to this show.  I loved Derik Shopinski’s costume designs and Steven Smith’s live musical direction was exceptional.  Unfortunately, all of these wonderful elements could not make this rusty script a success.  I think that there are some shows that stand the test of time and others that just feel dated.  This seemed to fall into the later category.