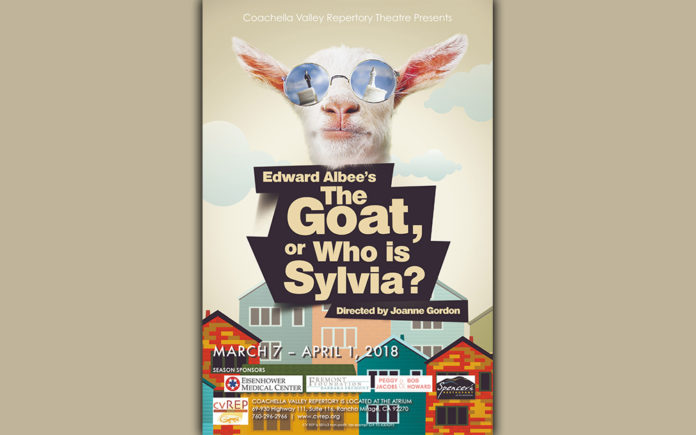 Theatre is not always intended to play it safe or ease an audience into a false sense of security.  It can be meant to challenge ideas and societal taboos. Poke holes in the norm and provoke thought and emotion.  Theatre is a reflection of our culture, the good, the bad and the ugly.  It can make us laugh, cry or feel a range of emotions in between the two extremes. And one thing that good theatre should always do, is make us think.

Greek tragedies were known as goat-songs because the prize in Athenian play competitions was a live goat. This is the etymology of the word Tragedy. These dramatic contests were part of the worship to the God Dionysus, who was the god of wine, of ritual madness, fertility, theatre and religious ecstasy in ancient Greek religion. So it is no surprise that Edward Albee’s Tony Award winning and Pulitzer nominated play, “The Goat, or who is Sylvia,” would take the audience to the root of genuine tragedy.  The Goat, currently in production at Coachella Valley Repertory, is a repulsive story.  The story is tragic and horrifying in all of the raw ways that humans can be repulsive.  It reflects the ugliness of societal taboos, forcing the audience to watch an approaching accident without being able to turn away from the inevitable crash.  I hated the story, but was forced to delve deeper into the meaning and underlying bloodiness of this family’s horror.

The Goat, or Who is Sylvia? tells the story of Martin Gray, sympathetically portrayed by Sean Smith,  a 50 year old successful architect who is in the midst of a mid life crisis like few others have had.  His abhorrent extramarital affair rips at the seams of his perfect life until there is nothing left but shattered remnants of what was lost.  His wife Stevie, performed by Sharon Sharth, had me grieving for her loss, until the end when this entire group of fatally flawed characters were left standing in the rubble of this goat song.  Smith and Sharth shared a palpable chemistry, which made this story that much more difficult to witness. Their loss was painful to watch.

Joanne Gordon’s skilled direction was the silk thread that wove this tragedy into a comprehensive staging of a show that is not easy to view.  I did not like The Goat, or who is Sylvia?  I think few playwrights, other than the legendary Mr. Albee, could approach such darkness and win acclamations, but I believe that it is vital to explore every dirty crevice of humanity in our story telling on the stage.  Not just the subjects that make us feel good, but the hidden foibles that make us human. Bravo to CV Rep for having the courage to venture over to the ugly side of town.

This is not a show for children, but it is a tale for all thinking adult theatre-goers.