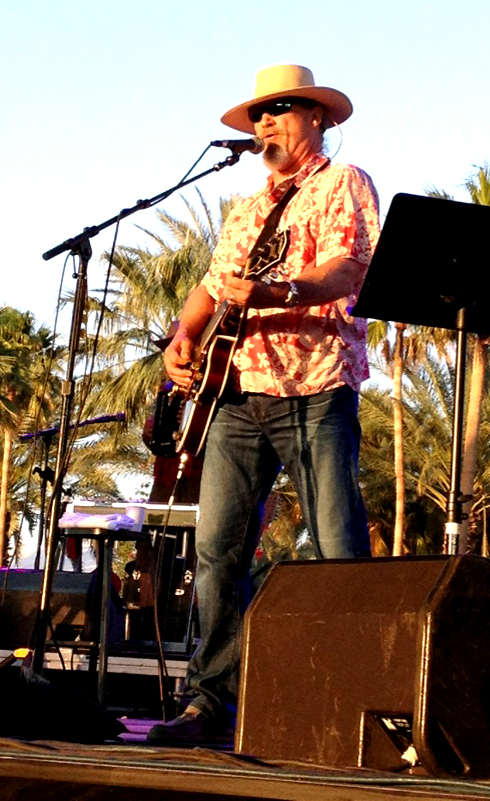 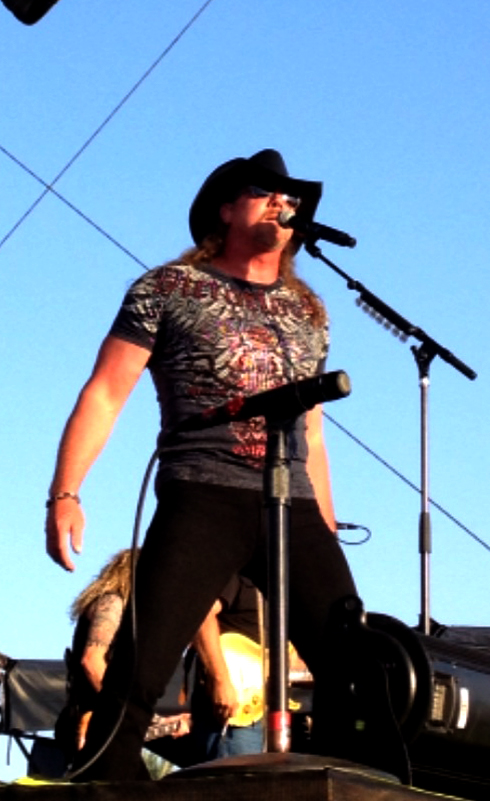 Stagecoach has confirmed one thing for certain. Jeff Bridges, though he has played many roles, will never live down his identity from the movie The Big Labowski as “The Dude” or “His Dudeness” or “The Dudarino. He walked on stage to the sound of many people calling out, “Duuuuude” while others shouted one-liners signature to the cult hit’s main character. Neither his sun glasses nor his hat could mask the distinctive way this man carries himself or the unique way he works his mouth when he speaks. He walked up, strapped on his guitar and rang out a few riffs that said without words, “Yeah, I play”, greeted the cheering fans and went to work. His voice rang out with the seasoning of an old-timer, perfect in pitch and tone but crusty and wailing as is expected of those with longevity in this genre. One can’t help but watch him and wonder if he’s tapping into a character as an actor, or if this is the music that compels his soul. Whatever the case, he’s worked at this and he pulled it off like a pro. You can definitely identify the influence of his longtime friend Kris Kristofferson in his style. He drew quite a crowd and time will tell if his music or his fame was the draw. Either way, the Dude abides.
Trace Adkins came on stage like an action figure, with his booming baritone voice and VERY TONED physique. He’s been slinging the weights around, looks good and he knows it. Trace has had a lot of success in recent years with songs like “Badonkadonk”, “Swing” and “Hot Mama”. They’re fun songs for sure, but represent a commercial, white bread version of country music that I’m not a huge fan of but seem to be Nashville’s money maker because a lot of people do. He sang all of those with gusto to the cheers of the crowd who sang loud and proud along to all of them. Just as I turned to walk away, he reached deep into his early material and pulled out “Every Light in the House”, a deeply touching and well delivered song that highlighted his beautiful deep register and the part of his music that made me a fan of his in the first place years ago. 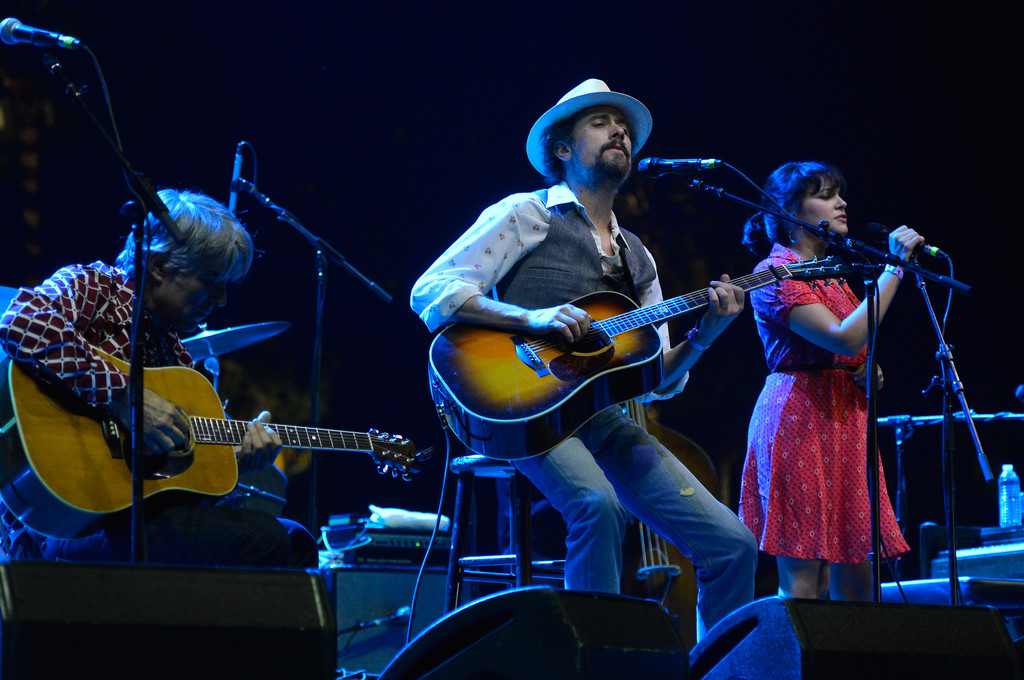 The Little Willies was an amazing feature at Stagecoach that surprisingly didn’t draw the stampede one would expect with the fabulous Norah Jones on piano and vocals. Other Little Willies members are Richard Julian on vocals, Jim Campilongo on guitar, Lee Alexander on bass, and Dan Rieser on drums. They’ve been performing classic country favorites together since 2003. It was not a Norah Jones concert by any means. This was a beautifully balanced blend of guitars, acoustic bass, drums and upright piano supporting nostalgic songs with ear melting harmonies. Still, that signature sultry voice flowing out of the mouth of the beautiful brunette at the piano could not help but stand out, capture your full attention and completely enchant you.
Bocephus, aka Hank Williams Junior, came out and did his job with the help of thousands of voices chiming in to sing with him. He didn’t banter with the crowd or do much of anything else but play guitar and sing. I’m thinking that is ok. After being born into this industry 64 years ago, he’s earned that right. Besides, his songs tell you everything you need to know about him. With the news of the loss of beloved country music founding father George Jones, one has to take note that our troubadours do not live forever and we need to bask in their presence while we can.
Toby Keith preceded his entrance onto the stage with a somewhat tedious video. I guess nobody has the guts to tell him that he’s kind of a bad actor. But that might be considered part of his charm. Anyway, on this video production, the comedic timing seemed off and we were all glad it was over when he came onto the stage with fireworks and flames bursting to the stomp of his magical foot. Toby Keith is like everybody’s drinking buddy and nothing gets a Stagecoach crowd going like drinking songs. Audience voices boomed as they sang loud and proud to the tunes that have become party favorites. It did feel a bit awkward, and maybe it was just me, when Toby sang “Made in America” underneath the Stagecoach banner sponsored by Toyota, but that’s not Toby’s fault I guess. All in all, it was a good kick off to the rest of the country music weekend. 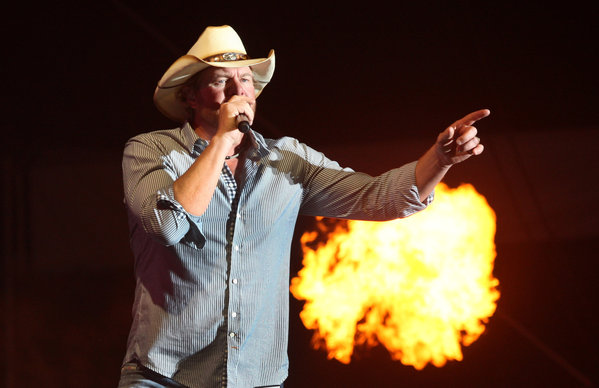 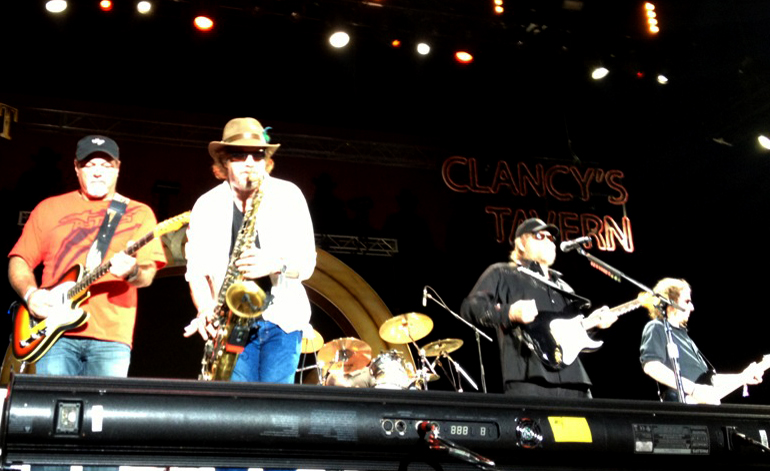