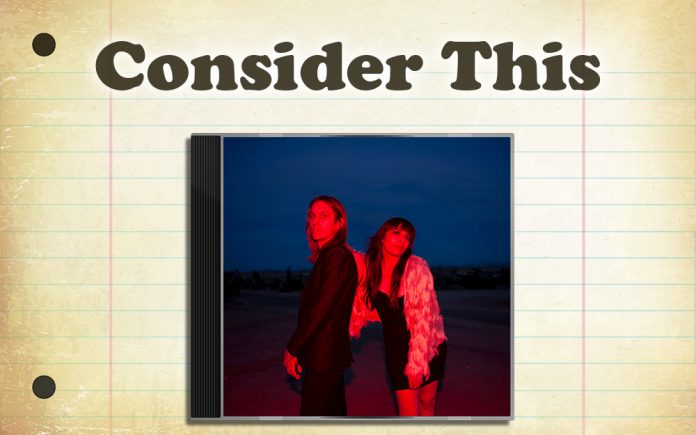 “When you were young you caught a broken heart, you had to set yourself free, said you were never going back, but you could take a chance on me/Even when the rain comes pouring and you’re lost and feel alone I will be here-keep the fire burning, love is free to roam, love is free to roam.” That’s Starlight Cleaning Co. navigating the rocky shoals of romance, on “Free To Roam” from their self-titled debut. The nucleus of the band is Rachel Dean and Tim Paul Gray. Although they began their separate journeys on opposite coasts, they connected rather serendipitously in the high desert.

Rachel grew up in Orange County and ultimately moved to L.A. She became obsessed with music at an early age, thanks to parents with an eclectic album collection. Original inspiration came from acts like Tina Turner, Heart and The Rolling Stones. As a kid, she would put on shows for her family and charge admission. Around age 16, she picked up the guitar, soon enough, she was fronting her first band, Tangerine, playing local coffeehouses and pep rallies. Not long after, she escaped the Orange curtain and headed to Los Angeles.

Tim started out in Wausau, Wisconsin, but after his parents divorced, he joined his mom in southern California. Musical talent flows through his family, his grandmother was a pianist, his dad and sisters can all carry a tune. The Beatles, and later, The Replacements, were huge influences. At around nine or ten, he caught a glimpse of a guitar in a neighbor kid’s basement and was immediately intrigued. He mowed lawns long enough to purchase a Johnson branded Stratocaster from Jerry’s music in Wausau. By age 12, he was bashing out songs in a garage with like-minded pals. His first band, Xsite (!) wound up getting one of their songs included on a vinyl Punk compilation from Hostage Records.

By the early aughts, Rachel was spending more and more time in the high desert, drawn to music scene that Robyn Celia and Linda Krantz cultivated as the owners of Pappy & Harriet’s. The pair bought the venerable juke joint in 2003 and turned it into a world-class performance space. By creating an inclusive and eclectic environment (Joshua Tree’s musical mayor, Teddy Quinn, likened it to Paris in the ‘20s), superstars like Robert Plant and Paul McCartney were content to share the stage with local musicians. (Now under new ownership, that sense of community has vanished, but that’s a topic for a separate column).

Anyhoo, Rachel’s band had been booked at Pappy’s a few times and she had begun making weekly pilgrimages from L.A. When her car broke down as she was scheduled to return, she took it as a sign. By 2007 she officially became a high desert denizen. She began curating events at The ACE Hotel in Palm Springs, which is how she and Tim first crossed paths. She wanted him to play The ACE, but instead, he ended up opening for her band at Pappy’s.

A few years later, they officially became a couple, they briefly relocated to New Orleans, but the siren song of the desert proved too great, and within a year, they were back. At this point, they began to pool their musical talents as an acoustic duo. Wanting to expand their sound a bit, they recruited drummer Salvatore Romano and the Starlight Cleaning Co. was born. Their first official show was at Landers Brew, on a bill with several alt.country stalwarts, including Beachwood Sparks, Mapache and The Tyde. Recently, they opened for The John Doe Folk Trio. After assembling a set of original songs, they enlisted producer Bart Davenport and, thanks to engineer Joel Jerome, recorded in their living room. The result is their sparkly, self-titled debut.

The record kicks into gear with “Don’t Take It Away.” Sleek and spangly guitars partner with angular bass and a dropkick backbeat. Rachel’s honeyed harmonies wrap around Tim’s lanky tenor on the opening chorus, but he goes it alone on the verses. The melody and arrangement split the difference between dayglo New Wave and warm Country comfort. Lyrics portray a couple at a crossroads in their relationship. Rather than stay and face the music, one of them hit’s the road; “I’ll hitch a ride out of here with any clown, in an ’83 GMC, with the windows down, you know I’ll run away and leave this town, if you keep taking the best I have found.” The rhythm shifts on the bridge, locking into a variation on Hal Blaine’s iconic “Be My Baby” intro, replete with glockenspiel and a tambourine shake. Soon, a rapprochement is reached; “I surrender, I do, can I come home?”

Couples in trouble seems to be the album’s leitmotif. Juxtaposed perspectives play out on the back-to-back tracks, “Joy Killer” and “The Current.” The former is powered by strafing guitars, buzzy bass and a rapid-fire rhythm. Lucinda Williams once growled “you took my joy, and I want it back” on her song “Joy,” and Tim borrows a page from her playbook. Rather than tip-toe through an emotional minefield, he bites the bullet and opts out; “No easy way to tell you that I’m moving on-ain’t looking back at what once was, what once was not lost, yeah, it’s sacrifice, comes with a cost, as I drag our love to the cross, I fear the day I meet my joy killer.” Gritty guitars coalesce on the break, rhythm riffs rev as spitfire lead licks take flight, swooping and spiraling across the sonic soundscape.

Rachel is front and center on the latter, her smoky contralto echoing antecedents like Motels front-woman Martha Davis, Robin, of Robin Lane And The Chartbusters, Pretenders architect Chrissie Hynde and Punk Priestess, Patti Smith. Spiky guitars ricochet across rubbery bass lines and a boomerang beat. Initially, she issues an ultimatum; “Don’t look in my eyes if you leave this time, don’t you say, don’t you say goodbye, I don’t want to cry tonight.” She recognizes the writing is on the wall; “If you fall in your dreams life may slip through the seams.” Ultimately, break-up is negotiated on her terms.

In an album stacked with superlative tracks, four stand out from the pack. Take “Like A Shadow,” which opens with a tangle of guitars that twang and jangle, before falling in line with descending bass notes and a chunky backbeat. Tim’s opening gambit is suave, stealthy and slightly Shakesperean; “Excuse my Sauvignon blank stare, none compare to you my love, fair words fail the feeling of knowing love is there.” Beatlesque guitars trip lightly on the break, tracing a bit of “Love Me Do” topography, just as he gets to the point of this sharp, albeit sheepish, sideways declaration of love; “Darker was my heart, before we were a part of each other, some days wouldn’t start and others would tick away so slow.”

Rachel takes charge on “Senses Again.” Darting guitars and tensile bass lines are wed to a pogo-riffic beat. The buoyant arrangement and infectious melody nearly camouflage clear-eyed lyrics that illustrate how easily we can become paralyzed by our memories, the good, the bad and the ugly; “Something worth holding on to will drive you mad, if all you ever do is let go and look back, it’s too late when you finally come to your senses again.” But when we’re at our lowest ebb, love can bring redemption; “It’s my revolution, seeing this for what it is, and like the lipstick on that grave in Paris, real love is temporary…but love will save a life sometimes, yeah love will save a life sometimes.” Cascading guitar riffs usher the song to a close.

Meanwhile, “Train Wreck” could sandwich nicely between Bruce Springsteen’s “Promised Land” and Tom Petty’s “Refugee” on any classic FM playlist. Jittery guitars collide with knotty bass lines, lithe organ colors and an insistent back beat. Tim pulls no punches as he takes a rebellious femme fatale to task. Rachel’s sultry harmonies weave in and out of the instrumental tapestry and their vocals intertwine on the chorus; “You’re the wild one that no one can protect, Daddy’s scared he’ll lay his little girl to rest, got the devil’s chain hangin’ ‘round your neck, and God gave you the grace of a train wreck.”

Finally, Rachel takes the reins on the pensive “Sooner Than You Learn.” Shimmery guitars are matched by twinkly percussion, brittle bass lines and a tick-tock beat. Her plaintive mien wraps around a few neatly turned phrases; “You got a lust for the line, you drink to ease the ache, a way out of time, still trying to catch that break/A sugar coat on the low, when the dots won’t connect, all crooked lines between one and the next,” and it’s clear that she’s trying to throw a lifeline to someone in need of some emotional rescue. Just ahead of the chorus, time signatures shift, accelerating as Tim and Rachel’s vocals dovetail. A plangent guitar solo unfurls on the break, underscoring the song’s tender ache.

Other interesting tracks include the torch and twang of “The Race” and the aforementioned “Free To Roam,” which blends scorching electric riffs and sun-dappled acoustic licks. The record closes with “House Of Hang-Ups, a stunning shapeshifter and a bit of an outlier. A thick slab of Memphis Soul folded into some Bacharach-ian grace, Tim’s willowy vocals lattice atop ringing guitars, sinewy bass and churchy Hammond B3, over a slow-cooked groove. A sad saga of marital ennui, lyrics speak to secrets kept and restless bets, clearly this house is not a home. It’s a moodily elegant finish to a to a remarkable debut.

Starlight Cleaning Co. serve up a potent combo-platter of indelible melodies, inventive arrangements, vivid harmonies and crisp instrumentation. They manage to sound like everyone you’ve ever loved, and no one you’ve ever heard before. Simply put, this debut is an instant classic. (Starlight Cleaning Co. will perform at AWE Bar along with The Mattson 2, Farmer Dave Scher, Victoria Williams, Robbi Robb and special guests on December 10th, Proceeds to Benefit The Neal Casal Music Foundation. Tickets available at http://link.dice.fm/c99dbb5c9aa9)