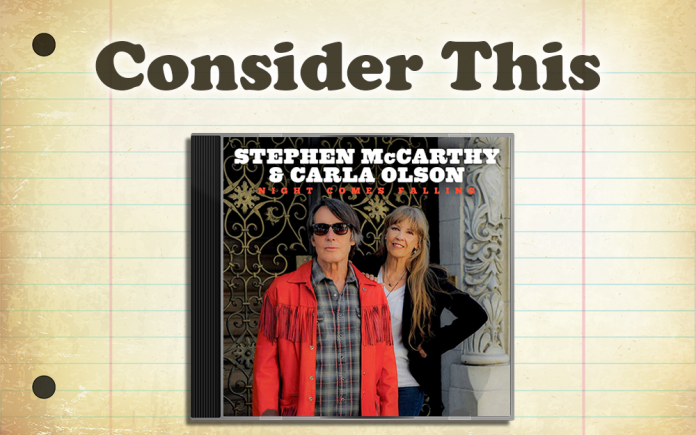 Carla Olson began making music early on. Growing up in Austin, Texas, Joan Baez and Bob Dylan were early inspirations, but pretty soon, she traded her acoustic guitar for an electric one. By the late ‘70s, she (future Go-Go’s bassist) Kathy Valentine were playing around town as The Violators.

Relocating to Los Angeles, they connected with ex-Dwight Twilley Band drummer Phil Seymour and formed The Textones. Although Kathy left to join the Go-Go’s, the band had already built up a passionate fanbase, serving up a potent combo-platter of Blues, Country, Folk and primitive Rock & Roll. They released two well-received albums, 1984’s Midnight Mission and 1987’s Cedar Creek. After that, Carla (sorta) went solo

That same year, she recorded So Rebellious A Lover, with charismatic ex-Byrds front-man, Gene Clark. Despite unanimous critical acclaim, the record sold poorly. As they readied a follow-up, Gene suddenly passed away in 1991.

For the last 30+ years, Carla has successfully straddled the line between performer and producer. She teamed with ex-Rolling Stones guitarist Mick Taylor for a couple of albums and released a few well-received solo efforts. She also produced and recorded with several disparate artists, including Mare Winningham, Phil Upchurch, Percy Sledge and Joe Louis Walker.

Virginia transplant Stephen McCarthy arrived in L.A. in the early ‘80s and immediately connected with Sid Griffin and Greg Sowders. As The Long Ryders, they pioneered a sound that wed good ol’ Country comfort to the combustible energy of Punk. After one EP and three groundbreaking long-players, they went their separate ways. Stephen went on to lend his talents on albums by The Dream Syndicate, Danny & Dusty. He also formed a left-of-the-dial supergroup Gutterball, and joined The Jayhawks. Occasional Long Ryder reunions led to the release of long-awaited fourth album, 2019’s Psychedelic Country Soul.

Carla and Stephen first became acquainted when he added dobro and pedal steel to So Rebellious A Lover. More recently they played together on Americana Railroad. Not only did she spearhead the various artist project, enlisting people like Dave Alvin, Rocky Burnette, Peter Case, John Fogerty and Dustbowl Revival, she also produced the record and performed three songs. Two featured duets with Stephen. Their vocal blend felt so effortless and symbiotic, that they knew they wanted the collaboration to continue. The result is their 11-song set, Night Comes Falling.

The record kicks into gear with a perfect trifecta of songs, “We Gotta Split This Town,” the title track and “Broken Lullaby.” The opener is urgent and muscular, stripped-down guitars, angular bass and gritty keys are tethered to a galloping gait. Although they’re solo on the verses, Carla’s smoky contralto dovetails with Stephen’s rangy tenor on the chorus. Lyrics sketch out a hardscrabble scenario of a couple of lovers running from the law; “I did my time, now I’m free from this penitentiary, one thing that you oughta know, we’re being watched whenever we go, state trooper on the overpass, so crank the engine and hit the gas, ooh, baby, they’re tryin’ to take us down, oh, save me, we gotta split this town” By the bridge, they’re on the brink of surrender; “Vagabonds and grifters, I knew ‘em all by name, life on the run can drive a man insane.” Souped-up and Soulful Hammond B3 colors intertwine with brawler guitars and hell-for-leather piano, fueling the outlaws’ final getaway.

“Night Comes Falling” is an irresistible blend of Byrdsy jangle and roughhewn Soul. Shimmery guitars, thready bass lines and a tumbling beat weave a polychromatic tapestry. On this wistful tale of star-crossed lovers, steadfast devotion defies distance; “Just because I couldn’t see you in the morning light, did you really think I couldn’t feel you when the night comes falling and calling you home?” Bluesy, bottleneck riffs collide with kaleidoscopic rhythm guitars, shuddery bass and a cantilevered beat on the break, giving the song a nice Power Pop patina.

Meanwhile, “Broken Lullaby” initially concocts a heady brew of reverb-drenched guitars, flinty bass lines, plaintive piano and a rattle-trap beat. Clever lyrics spin an apocryphal tale that finds Pocahontas and Billy Riley crossing paths on the streets of Austin. The cryptic chorus somersaults down a rabbit-hole of self-doubt: “I’m looking deep inside myself for answers that won’t come, the bell that tolls for broken souls is calling everyone/Reflections in the mirror I see, are ones that look like you, and those that look like me.” By the break, the arrangement flips the script, shapeshifting from a loping lament to a whip-creamy delight, featuring an acrobatic flugel-horn solo, ascending piano notes and a clip-clop beat.

The best songs here color outside the lines, using the Americana/alt.country (whatever) template as jumping-off point to incorporate a patchwork of shades and textures. Take “The One That Got Away,” rollicking piano wraps around searing slide guitar, tensile bass and a walloping backbeat. Unequivocal lyrics find a pair of long-lost lovers reconnecting for a second chance at romance; “The one that got away, came and tracked me down….he always moved me that way, he said what I’m lookin’ to do, is get my hands on you, I’ve been livin’ a lie, to say that I haven’t had that feeling too/ Livin’ in a small town, married late and settled down, raised a family found security, loved what we called our own, I used to call her mine, she was young and so fine, do I want to start two lifelong broken hearts, come together one last time.” Heading into the break, sidewinder rhythm guitar coils around wheezy keys, providing the tinder that ignites incendiary lead guitar licks and some slap-back baritone riff-age. The arrangement’s satisfying AOR crunch leans closer to Bonnie Raitt and Jackson Browne than Conway and Loretta.

If The Byrds, Willie and Waylon’s Outlaws and Bob Dylan ever collaborated, it might sound something like “Just To Get To You.” A spangly guitar fanfare is quietly supplanted by a cluster of chords that echo Bob Dylan’s seminal “Blowin’ In The Wind.” Sinewy guitars stretch across wily bass lines, rumbling baritone guitar, feathery mandolin, pliant piano and a sturdy backbeat. Carla and Stephen’s heartsick harmonies wrap around lyrics that seem to be lookin’ for love in all the wrong places; “You see my world was filled with sorrow, pining for a love that had gone, yesterday today and tomorrow, I struggle from dusk to dawn to find where I belong.” Guitars ring and chime on the break latticing piquant mandolin and player-piano notes atop a brisk beat.

“Brink Of The Blues” is an Grand Ole Opry-fied elegy powered by strummy guitars, weepy pedal steel, Honky-Tonk piano, knotty bass lines and a brawny beat. Not too many songs eloquently reference “Walking The Floor Over You” by Ernest Tubb; “Suitcase is there by the door, I’m still walking the floor, that Texas Troubadour got nothin’ on me, cause where I’m at you don’t need a key,” and A Love Supreme, John Coltrane’s Hard Bop masterpiece; “Once upon a time we shared a heavy love supreme, but we threw it all away , now it’s just a distant dream.” But Stephen and Carla manage to conflate the two and still include some high lonesome pedal steel on the break.

Finally, “Long Way Back To Seventeen” is a wry reflection on time, missed opportunities and second chances. Opening with a descending bass line that pays sideways homage to Wrecking Crew bassist Carol Kaye’s signature intro on “Wichita Lineman,” the song slips into a seductive Samba groove, anchored by burnished piano notes, willowy guitar and a slipstitch rhythm. A nuanced narrative speaks to the sacrifice we sometimes make, forsaking love in order to find our true selves; “I met my first love time a lifetime ago, and though his kiss was sweet I made him let me go…” Panoramic strings swell between verses, mirroring the lyrics cinematic sweep; “Rolling down life’s rocky road, battle scars and some heavy loads, the rainbows down in Tennessee were black and white to me.” Guitars tangle and twang on the break, bookended by glossy piano and an ecclesiastic horn flourish. Despite the emotional sturm und drang, the final reward is sweet; “Turn back the clock on this time machine, we took the long way, drivin’ fate’s highway, it’s been a long way, back to seventeen.”

Other interesting tracks include a rustic take on The Beau Brummels’ Jangle-Rock classic, “Don’t Talk To Strangers,” the novelistic approach of “The Bell Hotel Is Burning,” and a slowed-down, yet expansive rendition of Patti Loveless’ “Timber, I’m Falling In Love,” which topped the Country charts in 1989. It feels wholly apropos that the record should close with Gene Clark’s “Remember The Railroad,” as it first appeared on the Americana Railroad set, and served as the impetus for this album. A mordant meditation on humanity, the song is accented by rippling mandolin and keening fiddle. There’s an ache and a purity to their vocal blend that reveals unsung beauty of Gene’s music. 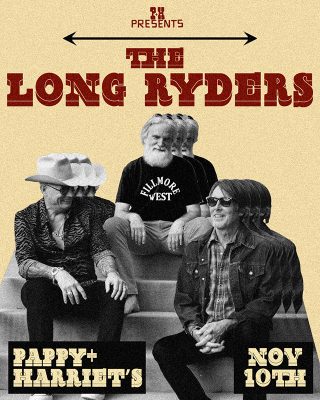 There’s something genuinely wonderful about Night Comes Falling. Carla and Stephen originally met through the auspices of Gene Clark and 35 years on, his presence looms large, shining brightly like a lodestar. But even as they honor his inspiration, the duo has managed to forge a new path. Hopefully, they’ll continue down this road, and there will be more records on the horizon.