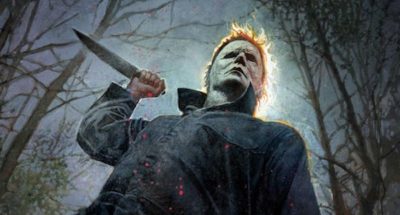 It’s hard to believe this is the 11th iteration of John Carpenter’s iconic and beloved (yes, beloved) movie and the 9th so-called “sequel” to his much-copied (ripped off?)  1978 original.

I was surprised at the sparse attendance at the screening I saw. I couldn’t help but wonder why this familiar film was even made. Other than the potential profits to be harvested, there’s not really anything new here other than a more realistic depiction of the post-trauma damage that resulted from the horrific experience of the 30-year-old assault.

Jamie Lee Curtis again inhabits Laurie Strode — her ninth turn as the character – in what is billed as the true sequel to the vintage slasher favorite.  One thing that works here is that no reference is made to any of the other branching cinematic stories that have played off the original during the last four decades. The reboot of the volatile and visceral raw ingredients of the bloody primal tale still provoke the desired jumps and scares.

Although there’s no delving into the sick pathology of Michael Meyers (that’s been done), all we know is that he has haunted Laurie since her harrowing escape from his killing binge when she was an innocent (virginal) teen.  There’s no question she has been deeply scarred by the murder of her three friends by the masked killer years ago. 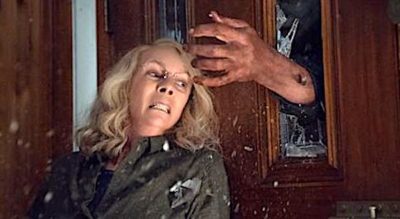 What we have here is a closer look at how a person deals with – or the impact of — such extreme trauma.  There’s inescapable contemporary relevance on so many levels if one wants to unpack this clearly intentional and worthy theme. Never doubt a survivor’s story.

This time around there are three generations of Strode women committed to confronting Meyers. And boy do they ever!There’s a strong and surprisingly potent emotional element in this telling.

Director and co-writer David Gordon Green delivers everything one might expect – especially the satisfying, bloody climax — from a true sequel to the classic B-movie that became landmark date-movies of the era. Vintage teen horror films of the time usually punished couples — or mainly girls — for having sex. Ironically, Carpenter’s eponymous predecessor was said to be a catalyst for couples – or guys — desiring a little more intimacy later in the evening.

If you like the Halloween genre, this one is not to be missed.

My hope is that after another 20 years, Jamie Lee Curtis will be up for another chapter in Strode’s story. I want to see a final story set in assisted care facility, but not as a joke. 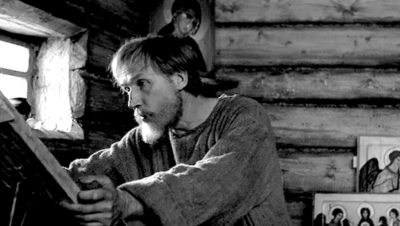 Andrei Tarkovsky (1932-1986) was a Russian filmmaker, dramatist, writer and cinema theorist. He made what is arguably among the handful of world cinema’s masterpieces.  He said, “I am interested in the theme of the artist’s personality and its relationship to his time. The artist on the strength of his natural sensitivity is the person who perceives his era most profoundly and reflects it most fully.”

Tarkovsky’s widely acclaimed masterpiece certainly adheres and exemplifies his artistic theory. The audacious, invented and epic film is neither a truly historical nor biographical account of Russia’s greatest icon painter. In fact, Rublev (1360-1430) is never shown painting his icons, and neither is the actor playing him in every frame.

Violent and gory (for a Soviet film), it’s set against the carnage of the Tatar invasion of Russia during the middle ages.

It’s a visually dazzling, and very tactile widescreen black and white pageant that presents an otherworldly hero wandering across a landscape of “forlorn splendor” observing suffering peasants, hallucinating scripture, working for brutal nobles until, having killed a man during the sack of the city of Vladimir, he takes a vow of silence and gives up painting. 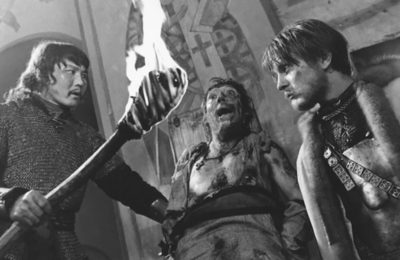 Tarkovsky’s remarkable achievement is mostly about visiting and feeling the world in which Rublev lived. It’s an indifferent world reflecting the conflict between austere Christianity and sensual paganism.  Imbued with a spirituality that is ever-present in his work, there’s a sense that while we may be on our own, we are never quite alone.

The film abounds with memorable images: a cat bounds across a corpse, wild geese flutter over a ravaged city, birch woods alive with water snakes and crawling ants, a decomposing swan on a forest floor, snow falling inside an unfinished church, naked pagans streaming through a thicket during a torch ritual.

The opening sequence sets the tone. A boy oversees the clearing away of muddy earth for the forging of a gigantic bell… The boy becomes a man who struggles mightily to maintain his creative and religious integrity.

Tarkovsky re-imagines Rublev as a Christ-like stand-in for the sufferings of a divided Russia under the Tatar invaders.

The generous and expansive extras (including the 205 minute initial theatrical cut) are fitting for the film, its maker and exemplary of Criterion’s very high bar that caters to film buffs. Recommended for the digital home library. Criterion. Blu-ray. 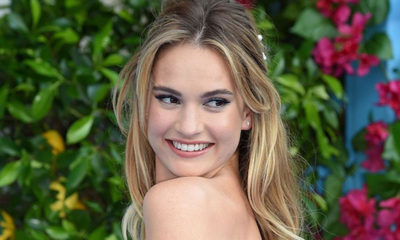