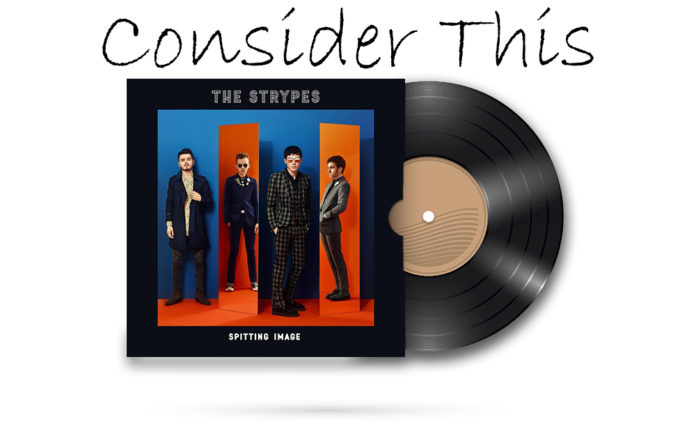 In this era of prescription mood enhancers, sometimes you just need a blast of explosive Rock N’ Roll. Cleansing and cathartic, brisk and bracing, it clears away the cobwebs, providing a reboot to the senses. Luckily, the new Strypes record is exactly what the doctor ordered.

The lads displayed a distinct disinterest in contemporary music. Instead, they found inspiration in music created more than a half century before. Their touchstones were Rock N Roll forefathers like Chuck Berry and Bo Diddley, Blues stalwarts like Muddy Waters and Willie Dixon, as well as British Invasion progenitors like The Yardbirds and the Rolling Stones, (the original line-up, when  musical savant Brian Jones was their acknowledged leader). All of these influences were analyzed and duly absorbed.

Simultaneously, they soaked up the Pub Rock of Brinsley Schwartz and Dr. Feelgood, the combustible Punk stylings of the Clash and the Jam, and the sharp songcraft of Elvis Costello and Nick Lowe. Once schoolmates Jack Hayden and Conor Bates joined the fold, they officially became the Strypes, (creatively misspelling their name much in the same tradition of the Beatles and Byrds). They began woodshedding in earnest, and made their live debut at a school Christmas concert.

By 2012, Jack and Conor had quit the band and the remaining three soldiered on as an instrumental trio until they connected with Ross Farrelly. The 15 year-old was a preternaturally talented vocalist and harmonica player. Gigging around their hometown, the four-piece initially focused on covering songs made famous by their musical idols. But quickly began composing theirown tunes.

A self-released EP was made available only on itunes cheekily entitled Young, Gifted And Blue it consisted of covers by Bo Diddley, Slim Harpo, Eddie Holland and Billy Boy Arnold. The collection leapfrogged to the top of itunes Blues charts, prompting a record label bidding war.

Their long player debut, aptly entitled Snapshot, arrived in the U.K. in late 2013 and the states in early 2014. An adroit mix of mostly originals and a few well-placed covers, it was produced by Chris Price, (Sex Pistols and Pretenders). The album garnered rave reviews and a passionate fan base on both sides of the pond.

Sidestepping the dreaded sophomore slump that usually trips up most bands’ second efforts, the Strypes returned in 2015 with Little Victories. Rather than repeat the winning formula of their debut, the four-piece expanded their sonic palette, adding unexpected colors and shadings.

Some critics carped that the band was mired in the past, but wasn’t that kind of the point? Should they have shifted gears and taken their musical cues from Macklemore and Lewis? Despite the weird backlash, The Strypes’ popularity increased.

Now they return with their third effort, Spitting Image, this time handing off production chores to Ethan Johns. The son of legendary producer Glyn, (The Who, The Rolling Stones, Led Zeppelin), Ethan began carving His own niche in the late ‘90s. He has produced albums for everyone from Ryan Adams, Kings Of Leon and Laura Marling to Tom Jones and Paul McCartney. He’s even recorded a couple of well-received solo albums.

The album opens with the triple-pronged attack of “Behind Closed Doors,” “Consequence” and “(I Need A Break From) Holidays.” Careening out of the speakers, “Behind…” is powered by an explosive, pile-driving rhythm, rumbling bass lines and spitfire guitar riffs that strafe the melody with blitzkrieg precision. Conversely, the lyrics paint a bleak picture of a barely functioning alcoholic… “the clothes you wore to work today are speckled with sick and Beaujolais..,” who ultimately chooses his vices over his family.

Bendy, almost Raga-fied guitar notes open “Consequence,” quickly followed by a rush of angular bass, wily rhythm guitar, a tart Farfisa organ wash and a rock-steady beat. Cryptic lyrics offer this succinct advice; “No performance necessary if you’re making your own demise, you can be a dog for the cemetery or a pussy with nine lives/No judgement, but lately you’ve been howling to your detriment.”

Meanwhile “…Holidays” is spiky and smartass, propelled by full-throttle guitar riffs, icy keys and a whip-crack rhythm. The lyrics, rich with detail, offer up an amusing account of a family vacation in Spain gone sideways. The opening couplet sets the Tone; “Sitting on the counter in a rented beige kitchen, trying to decipher weird Spanish television/And I don’t know what they’re saying but the ads really speak to me, I’m waiting for the part where They tell me shipping’s for free.”

The respite only gets worse from there, and the details display same sharp, sardonic wit of Elvis Costello, Nick Lowe and Squeeze. As the rhythmic velocity increases on the instrumental break, swirly, ‘60s keys feather over fuzzy, downstroke guitar and Ross confesses “…If you could get a tan from sitting in the pouring rain I’d do it In a second ‘cos I need a break from holidays.” The instrumentation reaches maelstrom proportions before stopping on a dime.

Punk Rock and Pub Rock remain the Strypes’ musical raison d’etre. But even as they distill those influences they add layers and textures all their own. Take “A Different Kind Of Tension,” although it shares its title with a seminal Buzzcocks cut, that’s where the similarity ends. Crackling drums and tensile bass provide a bedrock for smoking harmonica runs and zig-zag guitar riffs. The lyrics share the humiliation of a romantic rendezvous gone wrong; “It’s a spectator sport for the masochists and a grimace on the face of the masses/In a side street café they can’t bear to watch but they’re Still peering over their glasses.”

“Get Over It Quickly” pivots on a tick-tock beat, blending plucked, double-tracked guitar, splayed keys and infectious handclaps. The lyrics nail the sadistic rituals of Secondary School; “The naked truths and well-dressed lies, the greasy hair and toxic smiles…talking down to me, shouting over me, get it over quickly.”

The lads consistently display a level of songwriting prowess that belies their tender years. That is never more apparent than on “Grin And Bare It” and “Easy Riding.” The propulsive charm of “Grin..,” all jangly, sitar-riffic guitars and a stutter-y “Be-My-Baby” beat, neatly offsets a bleak tale of a 16 year old career girl who becomes trapped in a loveless marriage. This concise couplet says it all; “She cut her hair and stayed at home, did her shopping on her own subsidized by half price tokens/Consoled herself with books on love damp creeps in the wall above, the shower works when it’s not broken, he put paid to her trust, having fun with boys and toys of lust.”

Lush organ notes color the stop-start rhythm of “Easy Riding.” Over rubbery bass lines, stripped-down guitar and shivery harmonica, the lyrics take on our tendency to coast through life and question the allure of diminished expectations; “Who needs a mind when the party is all day, who needs a mind when your body is Grade A…You reek of ambition, but it’s such a shame you’re plagued with indecision, and you can’t hear the doubt inside but there’s no need to listen/Hit the town again man, there’s nights you can’t be missing.” The slash and burn guitars that ride roughshod through the song’s outro echoes British Invasion antecedents like the Who.

The action slows only for two tracks, “Great Expectations” and “Mama Give Me Order.” “Great Expectations” isn’t exactly Dickensian. In fact, it could easily be subtitled “The Wild, The Innocent & The County Cavan Shuffle,” as it recalls Bruce Springsteen’s early ‘70s grandeur along with the warm tones of vintage Thin Lizzy. Opening with sugar rush acoustic and piquant electric riffs over a kick-drum beat, the tune settles into a mid-tempo groove. A saga of restless youth and teenage rites of passage, it focuses on Johnny. Unlike The Boss’ hero in “Rosalita,” he remains tethered to apron strings, polishing “that ball and chain.” A jagged guitar and wailing sax solo bob and weave on the instrumental break urging poor Johnny to cut the cord and break free.

Contrarily, “Mama…,” is lilting and reflective, a plea for maternal guidance. Sparkly acoustic guitar, churchy organ fills and fluttery strings underscore this tender effort to reign in excess when “stuck here at the borders of brilliance and Tanqueray.” Wholly unexpected, it’s a bit of a cosmic exhale.

“Spitting Image” is crowded with memorable songs, but the Punk Rock intensity hits peak power toward the end of the record with “Turnin’ My Back” and “Black Shades Over Red Eyes.” The former is manic and fractious in all the right ways. Anchored by a Punky pogo back-beat, blistering guitars and searing organ fills, the lyrics question a girl’s moral compass with this withering observation; “Stranded in the present tense, convictions sitting on the fence/My gaze is skirting ‘round the room to avoid landing on you…I think the hairspray’s gone to your head.” The tempo quickly downshifts as a scuzzy guitar solo sidles between chunky power chords and walloping drums.

On the latter, shang-a-lang guitars are tethered to a loping rhythm and plangent keys. Trenchant lyrics like “We idolize those guys with six-packs and pearly whites, ‘cause they’ve got more followers than your Lord and savior,” rail against complacency and the culture of celebrity. The sentiments are serious underneath the easy-going melody, as ringing acoustic guitar collides truculent electric riff-age. If Nick Lowe had ever fronted Thin Lizzy, it might have sounded something like this.

“Oh Cruel World” closes the record out with a bang. Flinty, wocka-wocka guitar riffs fold into the boys’ beloved (but slightly disheveled), Bo Diddley beat. Bluesy harp notes hopscotch over the arrangement and stream-of conscious lyrics about “tea cups and pyjamas” speak to the power of the feminine mystique. But it’s really just window-dressing for the instrumentation which is nothing short of irresistible.

On the break wah-wah riffs slither under the insistent clave’ rhythm, the drums slowly build, shapeshifting into a tribal tattoo. Serpentine guitar licks lock into a gritty pas de deux with the harmonica. Suddenly it all accelerates wildly for a frenzied run through the chorus, before it all shudders to a halt.

With Spitting Image, the Strypes are three for three. These Cavan kids continue to harness their myriad influences, but never sound contrived or derivative. Not only does their prowess match their enthusiasm, but they seem to have eluded the typical growing pains that afflict most young bands. They offer a potent shot of musical adrenaline that can never be repealed or replaced.