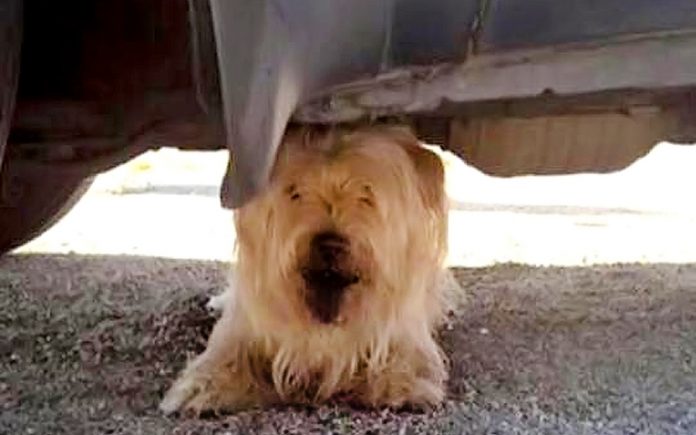 Our soaring summer weather can bring distress and even death from heat stroke to our beloved dogs.  Summer 2022 began early this year with extreme heat wave warnings this week

Every year this column tells the story of a little Silky Terrier who died from heat stroke on August 15, 2015, in a Desert Hot Springs car lot.  The dog sought refuge underneath one of the cars, but the scorching sand beneath her paws raised her body temperature even higher, and the site became her coffin. Help didn’t arrive in time to prevent the horrific and painful death she suffered, her throat parched from thirst. Summer is pictured here just before passing away. Ironically Summer died on International Homeless Animals’ Day.

Local animal advocates were alerted to the dog’s plight. Jo Venegas-Cebrun contacted Cathie Coats who was near the dog’s location. Cathie crawled underneath the car only to discover the dog had just passed away from heat stroke. Cathie recalls, “I was heartbroken, this dog is the face of neglect, this dog is the face of what heat does to animals.” The Silky Terrier was another sad casualty in the battle to prevent animals from suffering and dying in the heat.

Jo Venegas-Cebrun wanted to pay tribute to the dog she named Summer. This dedicated “rescue warrior” drove to Desert Hot Springs to retrieve Summer’s body, determined she would receive the love and dignity in death she may not have known in her short life. Jo took the dog to a pet crematorium, and kept her ashes in a memorial tribute.  Summer had no ID tag or microchip that would have identified an owner.

Summer’s death and photographs went viral on Facebook where animal lovers posted sad and angry comments. Her story was featured on KESQ televised news. Rescuers gathered in memory of the little dog they never knew. Countless “outdoor only” dogs are suffering during this scorching 2022 summer.  Some of them will perish without any public attention. 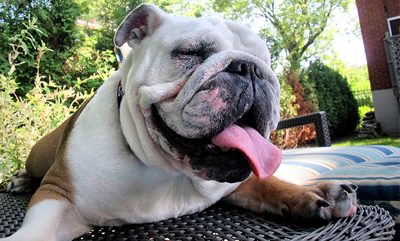 Summer’s legacy is to save the lives of more animals from the blazing summer weather. Even if it does not cause death, overheating can result in irreversible kidney, heart, liver and brain damage. Dogs cannot sweat the way we humans do, as their only sweat glands are in their nose and on the pads of their feet. Imagine being thirsty and drinking out of a bowl  scalding hot water bowl outside. The hot weather only adds to the distress experienced by lonely “backyard only” dogs.

Dr. Andrea Walters, a veterinarian specializing in emergency and critical care, helps us understand from a medical perspective why heat stroke can be so deadly for dogs.  “Heat stroke occurs when an animal’s body temperature increases so much that it cannot be regulated property and brought down.  Dogs don’t sweat like people do.  Instead, they pant to cool themselves down.  Heat stroke causes damage to proteins and cells, which can lead to severe shock and cellular dysfunction when blood vessels near the skin dilate dangerously.”

Dr. Walters explains dogs’ need to cool through panting is why extreme heat is more dangerous to flat nosed breeds such as Pugs, Boxers, Bull Dogs and Shih Tzu’s.  While heat stroke can kill dogs of any breed, seniors and puppies are at most risk.

More precious dogs will die from heat stroke this summer, some left in cars, others left on hot patios, some kept as “outdoor only” dogs in yards.  This cannot be said enough – – – BRING YOUR DOG INDOORS DURING THIS HOT WEATHER!  NEVER LEAVE A DOG UNATTENDED IN A CAR!

Your dog needs potty breaks and walks outdoors.  What should you do to protect him?  What are the signs of heat stroke in a dog, and what life saving remedies can you take?

Take your dog on long walks in the mornings and evenings, avoiding outings when the sun is at its highest.  Avoid asphalt and concrete when you walk, and stick to shaded areas whenever possible.  This is not the time to have him run alongside while you bicycle ride, or allow him to engage in strenuous play at the dog park.  Bring a bottle of water to sprinkle on him.

Know the symptoms of heat stroke.  These can include glazed eyes, heavy panting, and pulling back on the leash.  Other symptoms include excessive thirst, hyperventilation, dry gums that are pale or grayish, or bright red tongue or gums.  Your dog may quickly suffer weakness, staggering, confusion, vomiting, diarrhea, rectal bleeding, and ultimately collapse.  Finally, if the overheating isn’t stopped, his breathing will slow, and he may have a seizure or fall into a coma.

Dr. Walters advices, “if you suspect heat stroke, it is important to begin lowering the animal’s temperature as soon as possible, even before transporting them to a veterinarian. A hose can be used to cool the animal, focusing on the belly and paw pads.  Be sure the water is cool, neither hot nor cold.  If the garden hose has been sitting in the sun, the water will be very hot.  It’s very important to not cool the animal too fast.”  Lay the animal on a cool towel, but don’t wrap them in one as this could trap the heat. Get vet care immediately.

What can you do to continue Summer’s legacy? Talk to friends and neighbors who keep their dog outdoors 24 hours a day. Calmly ask them why their dog is always outside, and try not to put them on the defense. Provide them with information on heat stroke. Suggest they get a baby gate and keep their dog in a kitchen or laundry room during the hot days.  Give them a copy of this article.  Anyone needing additional suggestions to transition their dog from outside to inside can email me.  If they won’t budge on this issue, suggest they provide shade and lots of fresh water perhaps with ice cubes added.