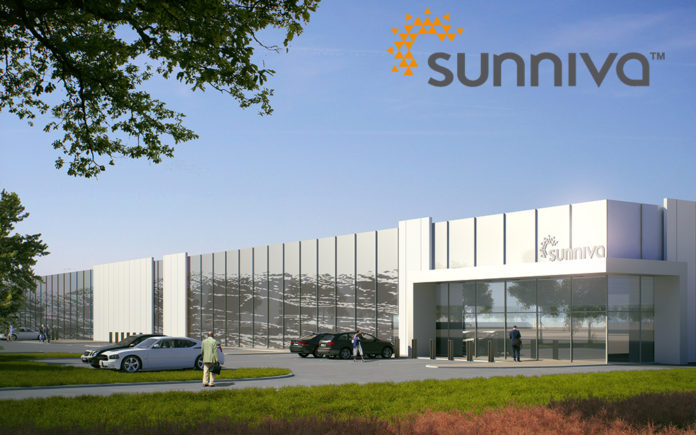 “The great news about the desert is 350 days a year of sun!  There are not many places in the world with that much sunlight,” said Duncan Gordon, Chief Operations Officer, Sunniva Medical, Inc.  “Greenhouse technology uses the power of the sun with dramatically less energy consumption than an ordinary inside grow.”

Sunniva means “gift of the sun” and the Canadian based medical cannabis company is nearing completion on a 325,000 square foot grow facility on Ramon Road, east of Date Palm Drive in Cathedral City.

“We are in the high-quality, low-coast medical grade cannabis cultivation business,” said Gordon.  “Our primary focus is medical, and we will service the recreational market as well.”

It’s 90 degrees on the Sunniva construction site in February.  The tall, still skeletal, steel and glass structure glistens in the profuse mid-day light.  Its glass canopy spreads across the lot like an accordion stretched tight.  The sunshine is defused on the cement pad below, just waiting to entice seedlings to grow and bloom. The heat is already intense.

“You can see by the size of the structure, this is not a traditional greenhouse,” said Gordon.  “We’ve done a lot of work around controlling heat.  It’s one of our biggest challenges.  The up-side is the desert is very low in humidity, which is harder to extract than heat when operating a greenhouse.”

When the structure is completed, Sunniva will support eight cultivation zones and a service house, which will support the administration and technology of the facility such as climate control, fertilizer tank systems, the offices and a dispensary.

Gordon anticipates the grow facility to be operational by summer — mid-June or July.   Sunniva intends to hold a job fair to fill nearly 200 positions!

“I want to be clear on this, you do not have to have cultivation experience,” said Gordon.  “The vast majority of new employees for this facility, 80 percent, will be trained.   We are looking across all industries for the expertise we need like cultivation managers and agriculture people.  But most of the positions are skilled or semiskilled, which we can train for.”

Sunniva will hire full-time employees, provide full benefits and profit sharing.   Recruitment is still a few months out, and a job fair will be held in Cathedral City.

“The city asked us to provide opportunity for the residents, and that’s our priority,” said Gordon.  “We will start with locals and expand our search if we haven’t filled all the needed positions.  From our perspective, if we can recruit from the community, that’s first prize.  I think it’s very important”

“I fundamentally believe the people inside the organization really make a difference,” said Gordon.  “That’s important because, we can now have fulltime employees who align to the culture of the organization.”

Significant to the facility is a method Gordon calls “Sunniva’s lean cultivation methodology.”

“We are going to use ‘level loaded production,’ which is used in ‘lean manufacturing’ around the world,” said Gordon.  “We want to apply those methods and principals to the cultivation of cannabis.  We are very proud of it.”

A key component for Sunniva is managing cannabis strains to flower in eight weeks.

Sunniva’s greenhouse facility has eight flowering zones, or bays, where the plants grow from about a foot high to flowering.  Cannabis is a fast-growing crop and most strains produce flower (bud) in eight to 10 weeks.

Under level loading principals, Sunniva is targeting for flower in an eight-week cycle.

“Fundamental to the design of our facility, we can cultivate and harvest eight zones,” said Gordon.  “Which means consistency of product supply to our customers, and consistency of inbound supplies from our suppliers in terms of rock wool, fertilizer, etcetera.   Steady level loading keeps supply without massive spikes, without activity falling off, or stopping without anything to do.”

Gordon expects it will take three months to populate each zone with cuttings, and the zones to flower.   In the 13th month, all zones will be at capacity and Sunniva will be able to start harvesting and planting consistently without a break in production.

“With level loaded production, we can employee full-time, well-paying jobs and we can apply serious training for our employees,” said Gordon.  “That’s important because, now we have full-time employees who have a buy-in to the culture of the organization.”

“We are working through the entire supply chain of cannabis,” said Gordon.  “From cultivation all the way through extraction and distribution.  Lean manufacturing says do all your ‘value added’ chain processes in the same location if you can.  Don’t break them up geographically.  You reduce waste and you add more value to the product.  Its more efficient.”

Due to zoning restriction, Sunniva has an extraction facility on Perez Road in Cathedral City.

“It would be better to have the extraction at this location, but for now, it’s just blocks away,” said Gordon.

“You can think of it like the shelves at Walmart,” said Gordon.  “Walmart sells name brands right next to their own brand.   We will produce cannabis with our genetics, high-quality, low-cost standards, and make it available for someone else’s brand.”

Sunniva will use no pesticides and will run the facility at food grade standards of production.

“We have a California company called ‘Focus’ and we are using their standards for compliance cGMP (current Good Manufacture Practices),” said Gordon.  “They are one of the few organizations that is taking cGMP standards and applying it to the cannabis industry.”

Sunniva welcomes the standards that are coming out in the State of California.

“Our opinion is they are long over-due.  We are quite prepared to compete with everybody else on a level playing field.   We would love to see the entire industry having to comply to the exact same quality standards.”

“If growers are using pesticides, what about the rights of the consumer?  From our perspective, it’s very important that we produce good quality product at a reasonable price that does not negatively affect the immune system of medical patients.  At the end of the day, what’s fundamentally significant to me is: pesticide free, high-quality, medical-grade cannabis at an affordable cost.”

Sunniva has created quality controls to ensure their product maintains high standards.  Third party testing is a State requirement.  Sunniva has a two-vault process to protect product from contaminants between testing and being shipped to customers.

Sunniva will grow its cannabis in rock wool – a construction material commonly used as installation in homes — rather than soil.

“The reason we use rock wool is because it prevents contaminants from coming in.  Soil potentially has a much higher risk of contamination.  Rock wool is a safe product actively used throughout the agricultural business.”

At this very moment, Sunniva is cultivating cannabis strains at a facility in Oakland, and will be bringing those “mother” plants to clone and transplant in the Cathedral City greenhouse.

“We are using a number of different strains,” said Gordon.  “The strains are not static. They evolve and change over time.  As the market conditions change, we will adapt and change our strains.  We will typically cycle our ‘mothers’ out every nine months.  Sometimes even quicker than that if they are not producing what we want.  Cannabis is a living organism.  We will continue to replace and refine our strains over time, until we are satisfied that we have strains that are meeting the market need.”

Sunniva is targeting two of the largest cannabis markets in the world—Canada and California.  When phase two is completed, Sunniva may be one of the largest cultivation and production facilities in the State.

Medicinal marijuana has been legal in Canada since 2001.   Recreational, or adult use consumption (18 years and older in Canada), will become legal July 2018.

However, it remains illegal to transport marijuana across federal or state borders.  The Cathedral City facility will only serve California.

Sunniva is building a facility in Canada twice the size of its desert location.  Gordon does not argue that Sunniva is not a pharmaceutical company.  The state set a moratorium on large corporate growing facilities, so Sunniva is partnering with smaller cultivators to fill the facilities’ grow zones.

“Sunniva’s a production campus,” said Gordon.  “We have one zone and we are going to have tenants in the other seven zones.  The advantages are we can bring in small to medium size business partners based across California that will be tenants in this building.”

“What that means is we can provide tenants with the necessary high-level, world-class infrastructure.  Alone, they cannot afford the infrastructure.  By putting these seven tenants under one roof, in combination with ourselves, now we can attract serious capital to put in high-end technology to compete on a global scale.”

“For us, the important thing is being able to compete on a fair market basis, but at the end of the day, it is such an opportunity to use high-end, real top-scale agriculture technology and apply it to cannabis.  It’s a fantastic opportunity.  It’s a game-changer.”

Sunniva is incorporating sophisticated agricultural, manufacturing and marketing techniques to the exploding cannabis industry.  It also considers itself to be a member of the community.  Last week, Sunniva sponsored “Jalisco Days” in downtown Cathedral City.

“We’re proud of this facility and we want the city to be proud of it as well,” said Gordon.  “The technology is very important, but it’s how you use technology.  In the long run, it comes down to people.  I’m a firm believer, people make a difference.”