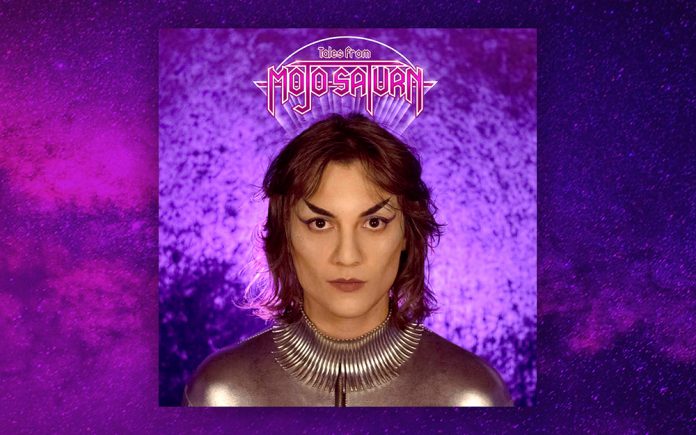 A few weeks ago when Joshua Adams from local rock band Fever Dog informed me that he had a new solo, side-project under the alter-ego, Blue Diamond I was immediately intrigued. Already a fan of Fever Dog, I had a feeling that his flair for theatrics would likely be showcased in this project and folks, I was not disappointed. Tales from Mojo Saturn is truly a wild ride full of dramatic splendor that weaves tales of other worldly beings in a galactic fantasy tied together by a score that boggles the imagination. After listening to this album in its entirety, I had a plethora of questions for Blue Diamond.

CVW: “So, first things first. You are a member of Fever Dog and that project has been your baby for some time now. This side project seems to have a vintage vibe in its sound and feel that transports the listener to a time before you even existed. Is this an idea that you have had for a long time?”

Blue Diamond: “I’ve been composing, writing, & recording my band’s music as well as my own for over ten years.  In my school days I was obsessed with electronics so naturally I began to attempt to make recordings of our garage band with some make-shift equipment. There was a lot of trial and error, a lot of browsing internet forums, and a lot of trips to radio shack. That was all very useful stuff and I made some progress but. I think I learned the majority of what I know about songwriting and production by listening to my favorite records and trying to emulate what I heard. My intention has never been to sound vintage whatsoever; in fact I kind of dislike the comparison, although I do understand where it comes from. The toolset I’m working with and what I measure my own music against has always been my favorite records, which just happen to be rather old fashioned.”

CVW: “You will have to forgive me but, although I have seen Xanadu, it has been many years. Explain to me what I am listening to. Is this a remake of something or some sort of fan fiction and how/when were you inspired to do this?”

Blue Diamond:  “It’s actually not related in any way and I’ve only seen Xanadu one time in a bar and the sound was off. Xanadu is a fictional place that has been used in poems and stories dating all the way back to 1798. I guess I just enjoyed the way the word sounded and needed a stand in title for a fantasy planet covered in thick vegetation and dangerous wildlife (imagine the Coachella Valley Wildlife Refuge.) No disrespect to Olivia Newton John. I suppose it’s too late to change the title. Damn!” 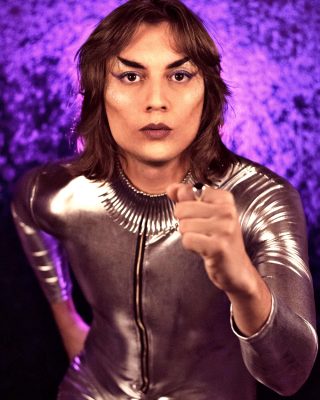 Blue Diamond continues: “I’ve always had a love for fantasy & science fiction stories, role-playing games, impenetrable progressive rock concept albums, radio dramas, and wild music. The work I do in Fever Dog is definitely more of a collaboration with the other members but my solo-work, this album especially, is where I’m able to brazenly cram in as much awesome bullsh*t as I want! Screw Danny!”

CVW:  “When did the project turn from whatever your idea was to something you were actually working on in real life and who helped you with it?”

Blue Diamond: “I record very wildly. The majority of what I write and record is never released. So this album began to very organically take shape over the course of a few years, just randomly coming together. My ideas are very much like that. I never plan, or think, or decide to do something specific. Usually, just a completely manic obsession will visit me, make my life completely miserable, ruin my relationships, ruin my home and professional life, and basically not leave me alone until I decide to get my ass in gear and bring it into fruition. I don’t consider myself as having ideas, it feels like ideas just visit me and drive me insane. Sometimes I wish my ideas would go and bother someone more talented and qualified than myself but here we are.”

Blue Diamond continues: “As far as help, I did this album all by myself. All the playing, engineering, producing, composing, mixing etc. Although one song I did think it would be cute to have my friend Danny Graham come in and play a little guitar. I like to throw him a bone every once in a while.”

CVW:  “Have you or are you planning on performing any of this live?”

Blue Diamond: “If you are a musician who can help me with that and you aren’t a complete joke, find me on instagram and we’ll see what we can do.”

CVW:  “Do you have any other unusual project ideas in the works or at least in the back of your head?”

Blue Diamond: “Yes! Apart from my Rock & Roll, I want to compose an operetta. Outside of music, I want to take a crack at writing theological essays and designing a Dungeons & Dragons module. I’ve always wanted to run a marathon and my mom says I should go on Jeopardy. But most importantly, I want to play more drums!”

CVW: “Anything else that you want to mention? Go nuts!”

Blue Diamond: “Yes! I’m looking to open a 24-hour alcohol free, topless donut shop in Cathedral City or Old Town Indio. If you have serious advice or want to get in on the ground floor, contact me via email, my bandcamp page, or instagram.”