Recently a magazine referred to Teddy Quinn as the Musical Mayor of Joshua Tree. That seemed completely apropos, but it’s just the tip of the iceberg. Teddy Quinn is that and so much more.

Although he was born in La Porte, Indiana, Teddy was very much a child of Laurel Canyon. His family moved to the bohemian enclave not long after his fifth birthday. Their first Christmas there happened between two life-altering events: the assassination of President Kennedy and The Beatles’ first appearance on the “Ed Sullivan” show.

When his brother and sisters began modeling, Teddy, (the youngest of four),  quickly followed suit. A precocious kid, acting came pretty naturally.  Appearing in a Bayer aspirin commercial, he was supposed to recite the line “mothers are like that.” But he quickly ad-libbed “yeah, they are,” and endearing catch-phrase was born.  The public was captivated and his 30 seconds of air time caught the attention of casting directors.

For the next several years Teddy was in demand, juggling  jobs on hit  television series like “Bewitched,” “Bonanza,” “General  Hospital,”  “That Girl,” and “The Patty Duke Show.” He worked with Bill Bixby on both “My Favorite Martian” and “Courtship Of Eddie’s Father.” He was also in feature films like “Madam X” with Lana Turner, “The Ballad Of Josie” with Doris Day and a pair of Don Knotts’ hits: “The Ghost And Mr. Chicken” and “The Shakiest Gun In The West.”

Teddy wasn’t one of those tortured child actors; for the most part he enjoyed the challenge of learning his lines, and hitting his marks. But he was passionate about music. Coming of age in L.A. in the ‘60s and early ‘70s, he was surrounded by Rock N’ Roll.

Not only did Frank Zappa move in across the street from the Quinns, (Teddy was sent over by his siblings to reconnoiter the scene and report back), but his parents took the family to see the Beatles at the Hollywood Bowl and the Yardbirds at the Hullabaloo club.  In 1967 they traveled to the famed Monterey Pop Festival. Not long after, his brother and sisters started their own band, Original Uncut Version.

Just as Teddy’s acting career was winding down he began co-writing songs with a high school friend. Of course bands like the Byrds and Buffalo Springfield, along with singer/songwriters like Joni Mitchell, Tim Hardin, Laura Nyro and Neil Young resonated. He was also deeply influenced by Bob Dylan and John Lennon, but he experienced a true musical epiphany when he discovered David Bowie.

Whereas the other acts were music his siblings had introduced him to, Bowie was wholly his own. From his androgynous appearance to his outlier music, he provided cosmic inspiration for the next 45 years. Not long after he finished High School, Teddy started his first band, Eighties. (It seemed like a futuristic name in the late ‘70s). They played at Club 88 and other venerable L.A. venues.

As the “Me Decade” trickled away, Teddy, as well as Cathie Kimble Shinn, Donald Kaiser, Denise Fraser, Debra Quinn and Elizabeth Taylor Taubman banded together. First, as Les Enfants Terrible, and then more lastingly as Telekin, (from the Greek, meaning far relatives). They immediately began making a name for themselves on the club scene, more so when they added drummer Fred Drake.

While their music was synth based, it never emulated the chilly robotica of MTV hit-makers like A Flock Of Seagulls or Kajagoogoo. Instead, their sound was closer to the pulsating warmth of Roxy Music or Bowie’s Berlin trilogy.  Renowned Fashion/Rock photographer Moshe Brahka characterized Telekin’s sound as “electric bohemia for the teenage underground.” He was an early champion as was Frank Zappa’s manager, Herbie Cohen.

Telekin cultivated a healthy following, mostly playing at the celebrated Lhasa club. They also opened for up and coming bands like Dream Syndicate. Although they amassed over 100 original songs, a record deal remained elusive, and they disbanded in 1985.  At the tail end of the ‘80s, Teddy and Fred Drake teamed with Robert Allen Floyd and formed Ministry Of Fools.  Their music was a heady brew of Psychedelia and Folk-Rock.  The trio released one excellent album, Color While You Dream.

By 1993 Fred and Ted had relocated to Joshua Tree. After a lifetime surviving the dense cosmopolis of Los Angeles, the high desert was (literally) a breath of fresh air and a panacea for the soul. Things came together quickly once Fred found the house that he transformed into the world famous Rancho de La Luna recording studio.

It was there they each recorded solo albums and collaborated with other artists.  Sadly, Fred passed away in 2002. Although he was completely heartbroken, Teddy soldiered on, carrying Fred’s cosmic torch, he released two posthumous Fred Drake collections: Sky Party and Desert Dreams.

All told, Teddy has recorded five solo albums:  Canvas, Help Wanted, Dog Years, Folk In America and Mother And Child. He also joined forces with the bands Dig Your Own Cactus and Rock Art In Joshua Tree, recording three albums with the former and one with the latter. In 2005, he co-produced his greatest creation, his son Sage.

Over the last few years Teddy has tirelessly championed the high desert music scene, curating the Reality Show on Monday nights at Pappy & Harriet’s and hosting the Super Ruby Tuesday Jam at the Joshua Tree Saloon. He is also the founder and creative director of Radio Free Joshua Tree and he was instrumental in making the Beatnik Lounge a co-op where art and music coexist in sweet harmony. All his hard work has definitely earned him the sobriquet, Musical Mayor Of Joshua Tree. But first and foremost, he is a musician.

With the sudden and unexpected passing of David Bowie in January, Teddy experienced a musical carpe diem. All of his whirlwind activities had sidelined his true passion: music. Heeding John Lennon’s perspicacious quote “Life is what happens to you while you’re busy making other plans,” he seized the day. 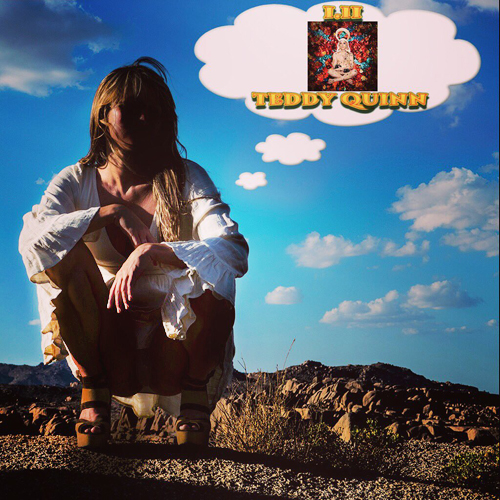 First, he corralled together his band, the Merciless Beats, along with some very special guests. Setting up recording equipment at the Beatnik, Jamie Hafler recorded them mostly live, mixing direct to two-track analog tape.  The result is a nine song set entitled 1.11, (a reference to the first day on earth after David Bowie’s passing).

The album opens with a bit of a throwback to his Telekin days. “Flutterby” was co-written by Telekin kin Donald Kaiser, who also provided all the instrumentation.  Warm jets of Electronica swirl with hypnotic charm. Tinkly synths and darting keys ping-pong through a spatial melody. Teddy’s mien is both vulnerable and seductive as he offers up this mordant couplet; “Trust me, if we don’t give everything we’re nothing/Nothing worth keeping, nothing worth saving.”

Both “Jenny Q” and “Ghosts On The Road (Pioneer Canyon Reimagined)” are steeped in the arid high desert soundscapes. “Jenny Q” is a gauzy, chanson propelled by wheezy accordion runs, filigreed fret-work and a courtly kick drum beat.  The chiaroscuro imagery is dusty and desolate. The tune clacks to a close like a shuddering train.

“Ghosts…” is collaboration with French musician Cedric Couvez (ne’ CatCat).   Roiling, rubbery bass lines add ballast to the aural collage of skronky guitar, feline keys and Teddy’s spectral vocals as he pays homage to the shadowy antecedents that paved his way; “I come before you, who’ve gone before me, I stand on your shoulders to see where I’m going/Ghosts on the road.”

Teddy is a guy who wears his heart on his sleeve. For him, the personal will always be political. That ethos is never more explicit than on a couple of tracks.  “Martin” is a languid plea for peace that locks into a Doo-Wop groove.  Inspired by the death of young Martin Richard (a victim of the Boston Marathon bombing), the lyrics simply encourage us to treat each other with kindness; “chant it like a mantra if it helps you remember, no more hurting people.” Warm rhythm guitar chords wash   and resolve in front of a relax-fit rhythm and concise guitar solo spirals across the gentle melody like an untethered balloon.

“Acceptance,” co-written by Lee Scott is delicate and ethereal. Spacy, U.F.O. synths cradle flickering guitar riffs and minimal percussion. Heartbreakingly tender, it ponders the eternal questions; “How do you find someone to love, how do you know when you’ve had enough?” An incandescent tone poem, it ends on a hopeful note. “I’m practicing, but I’m not perfect, I’m practicing acceptance.”

The best tracks here are “Cockfighter” and “Black Rose.” The former is a cracked Country Waltz that recalls the Rolling Stones, circa 1972.  Slippery and shambolic, it’s powered by stripped-down guitar and flowery pedal steel. The lyrics peck through a series of playfully priapic double entendres (It all becomes chanticleer).

The latter is suffused in melancholy.  Equal parts fragile and shatterproof, the melody summons the ghosts of John Lennon, Lou Reed and Alex Chilton. A sharp meditation on unrequited love the heartbreak is palpable; “If you were mine in another space and time I could read between the lines and you could read my mind/But I’m on an island, where I must remain silent in peace and in quiet, apart from a world so loud and so violent.”   The kaleidoscopic arrangement is anchored by a rock steady beat, sawing cello, strummy rhythm guitar and two scorchingly cathartic guitar solo from Leslie Mariah Andrews.

Other interesting tracks include the blistering Blues-Rock of “Get Tomorrow Back.”  The album closes with “Avatar (Pink Guitar),” which was co-written by Sage Quinn-Blair.   Over a rat-a-tat-tat rhythm loping guitar, wistful cello and high lonesome pedal steel, Teddy unspools a see-saw shuffle.

The message is half heartfelt manifesto and half stream-of-conscious ramble. At one point he reminds us to “remember to credit the source, go for a ride on your horse/Remember may the force be within you, but of course may you be without force.” Tender and quiescent, it’s a contemplative end to an excellent record.

Teddy Quinn is the real deal. 1.11 marks the welcome return of an accomplished singer-songwriter, protean musician and most prominently, gentle spirit and true mensch.

Teddy’s having a listening party for 1.11 at FRONTIER COFFEE (55844 Twentynine Palms Hwy, Yucca Valley) on November 11th from 7-8pm

There will also be a LIVE performance of the album on November 12th at JOSHUA TREE SALOON (61835 Twentyninec Palms Highway, Joshua Tree) at 5pm SHARP.