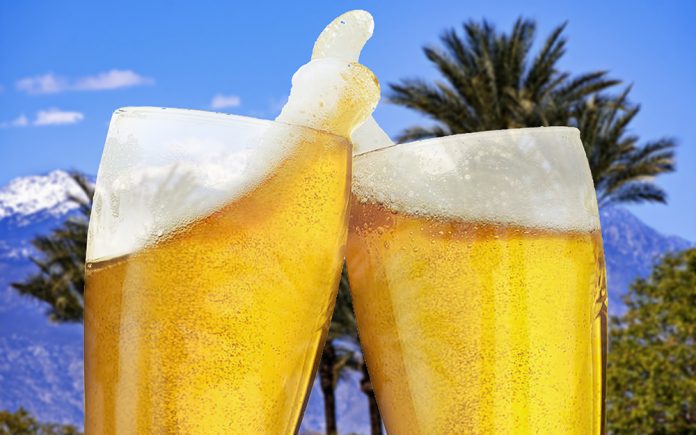 The Coachella Valley received its first brewpub in 2002 when Don Callender opened Babes Bar-B-Que and Brewery in Rancho Mirage and it was to be the lower desert’s only locally produced craft beer for eleven years. Don was a visionary and pioneer; in addition to Babe’s at The River, he also built two additional showpiece brewpubs, P.H. Woods in Moreno Valley and Slim Pign’s in Redlands.

The Brewhouse is expertly manned by Coachella Valley Brewing alum Juan Higuera and while classic Babe’s beers like Blackfin Lager and Honey Blonde remain staples on the beer menu, Juan has upped the ante with experimental brews like Gingerbread Milk Stout and Babe’s Hazy IPA. This iconic ‘Que joint with more brass than an 1880 locomotive was the only craft brewer in town until these last (almost) ten years.

Fast forward to the autumn of 2013 when two new breweries were spawned almost simultaneously as Coachella Valley Brewing and La Quinta Brewing Company flung open their doors. Both hit the ground running, offering kegs to bars and restaurants while packaging beer for grocery stores and Mom & Pop retailers. While the two operations started at the same time, each took a different road to product development.

Coachella Valley Brewing, winner of the “we opened first” competition, opted to keep their flagship lineup small and feature a dizzying array of one-off specialty brews. Their approach was to work with the diverse and expansive agricultural East end of the valley to produce unique flavored beers. One of my first samplings was a Vienna Lager made with locally-sourced dates and I recall the marriage with much fondness. Operational and personnel issues took the brewery off the rails for a short time, but the ship seems to be righted once again.

La Quinta took the old-school approach by launching with a core of several mainstays and simply doing occasional seasonal offerings. They’ve stuck with the plan, all the while launching satellite tap rooms in Old Town La Quinta and DT Palm Springs. They also opened a new brewery home in what will be a bustling part of Palm Desert once the new Acrisure Arena opens in December of this year. The new location boasts 14,000 square feet, a full-service kitchen, and 24 tap handles which feature all of La Quinta’s available beers and guest brews as well.

Devon Sanchez, another Coachella Valley Brewing spinoff, launched Desert Beer Company in July of 2019 and just celebrated a pandemic-delayed second anniversary a few weeks ago. Desert Beer has followed the Coachella Valley model with several mainstays followed by a big list of rotating and one-off beers. The fact that there are always 21 beers on tap staggers the mind. The fervent local following keeps the taproom busy six days a week and there is almost always something new to sample.

Later the same year, Rey Romero and Sam Gill opened Las Palmas Brewing on N Palm canyon Drive and DT Palm Springs finally had a brewery to call its very own. The two have taken a more traditional approach in producing classic, traditional styles from California, England, and Belgium. Their Table Beer is light, breezy, and exceptionally refreshing; the perfect complement to our desert climate. The batches are small, giving Las Palmas excellent rotation of product and super-fresh beer at all times. Guest beers are offered in both cans and bottles and the all-natural wine program is well curated.

Spotlight 29 built a brewery as part of Taproom 29 and opened in December of 2020 in the waning days of the pandemic. Full disclosure: I am employed by the tribe and am the Brewmaster of 29 Brews. The brewery currently produces four classic styles, and the Taproom features almost 20 rotating taps of both currently trending beers as well as throwback timeless offerings from the USA and Europe. The Taproom offers a wide-ranging menu, with everything from barroom appetizers to a 34oz Tomahawk Ribeye certain to satisfy even the biggest of appetites.

I’ve often remarked on these pages that the climate in the Coachella Valley and the beer climate are quite similar; both are a desert. The beer scene in this region is still in its infancy, seemingly awaiting the right operation to come along and grab the educational bull by the horns. To date, this has yet to happen, and growth continues as slowly as a desert tortoise. As demographics continue to shift in the region, my prediction is that one day, the entire valley will resemble an oasis of beery goodness in an otherwise expansive desert.

(When Ed Heethuis isn’t brewing at Spotlight 29 Casino for 29 Brews, you will find the Certified Cicerone / Brewmaster out on his road bike, searching for the perfect Ribeye, or talking beer with the patrons at Taproom 29. He may be reached at: heethuis.ed@gmail.com or wherever beer may be found in the wild.)