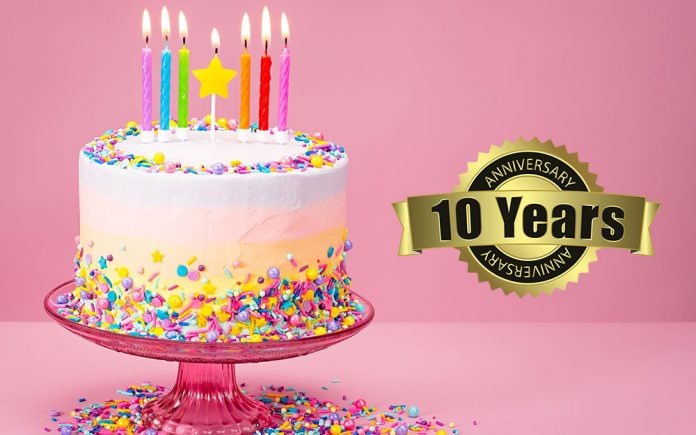 Amazingly, I have written articles in every edition and not missed one deadline in ten years.  That equals roughly 520 articles and 325,000 words.  If the articles were a compiled as books, it would be a four-part series.

The very first article way back in 2012 was about Social Security and how Congress changed the way it calculates future increases in benefits.  The key point of that article was that Washington DC reduces what a person expects to receive by changing how the Consumer Price Index is calculated.  Simply put, if the inflation rate or CPI excludes things like food, fuel and housing, it is hardly a true measure of price increases.  When a statistic like CPI is gamed, you can see how social security payments for younger workers should be inadequate when they reach retirement age.

Ten years later and I am still explaining the same things, albeit in a different form.  Today, I talk about negative real interest rates and how inflation is caused by the creation of 40% more money as part of the bipartisan plan to keep the fabric of society together through the pandemic.  The easy money that was used to keep people clothed and fed during the pandemic also served to reduce the value of the currency.  As such, everything costs more.  Where the official inflation rate is 8% at present, it is at least 15% if you add things like food, fuel and housing.  Throw on the impact of the Russian invasion of Ukraine and prices go even higher due to constraints on oil, grains, and rare minerals.

Back in April 2012, I was explaining how the STOCK Act was passed six years after it was first introduced to Congress.  The acronym STOCK stands for Stop Trading on Congressional Knowledge Act.  It seems that Congress could trade on confidential information when buying or selling stocks.  Words ‘confidential’ and ‘insider’ mean different things inside the DC beltway.  Until the STOCK Act, legislators could trade stocks on ‘confidential information’ – that was fine.  If you want to know how your favorite legislators on both sides of the aisle became millionaires while in Congress, the ability to trade on what everyone else calls ‘insider’ information helped many become very wealthy.

Ten years later and the abuse of power continues.  We have a former President who praises authoritarian regimes more than democracies while contesting an election that he clearly lost.  We also have a current President with a problematic son who demonstrates how those with power and influence can make huge amounts of money from these connections.  Whether we are discussing Democrats or Republicans, both parties are led folks most of us would not consider our brightest or our best.  Both sides have folks at the top who may not have the best interests of most Americans at heart.

More often than not, bad behavior in politics is not by intent but due to dysfunction and a general dumbing down of America.  In a March 2013 article, I proved this by sharing nonsensical laws.  For example, in Chico, California there is a $500 fine for detonating a nuclear device within city limits.

While you and I cannot change many of the large, macro issues that impact our daily lives, we can make a difference in our local community by getting involved.  Whether it is through volunteer work at a charity you care about or paying attention to the actions of your city council, you can make a real difference with a little bit of effort.

“We cannot solve our problems with the same thinking we used when we created them.  If we want a better town, city or world, we need to do our part.”  Those words once spoken by Albert Einstein sum up what you and I should do.

Thank you to you, Tracy and Phil for the opportunity to share my thoughts with you for over a decade.