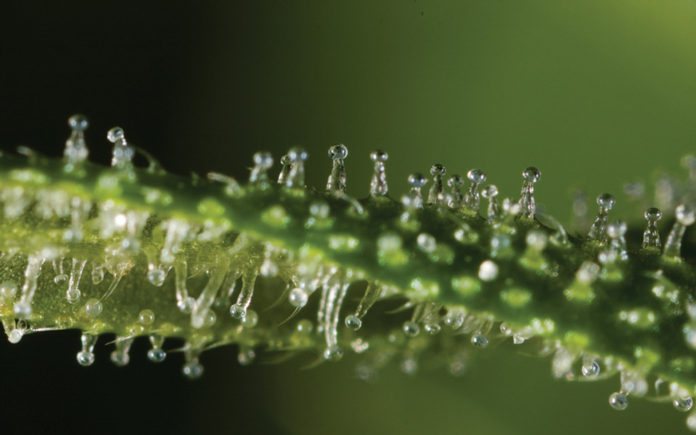 Terpenes are aromatic metabolites which are in all plants. Their function is to defend the plant and to attract pollinators. Terpenes are a part of the cannabis plants’ survival instinct. In cannabis, terpenes live in the trichomes, or “crystals”, of the cannabis bud. The trichomes are small hairs that live on the flower (bud) and leaves of cannabis. Not only do terpenes live in the trichomes but cannabinoids and flavonoids exist there as well. There are at least 100 terpenes found in the cannabis plant. A strong visual terpene profile usually indicates that the grower of that specific plant handled it with care and keen discernment of harvest, curing, trimming, and packaging. With such care, the consumer opens their fresh jar to receive distinct flavors, colors, and smells thanks to the well kept trichomes.

Pinene: Pinene has anti-inflammatory properties. It is found in orange peels, pine needles, basil, and parsley. It is known to counter short term memory loss, it works with the respiratory system to promote improved airflow, and promotes focus.

Myrcene: Myrcene is found in mangoes, hops, thyme, and lemongrass. In cannabis it can compose up to 50% of a cannabis plants terpenes. It is useful as an anti-inflammatory, a sedative, and a muscle relaxer. Indica strains commonly have high levels of myrcene which can make one feel as though they are having a more cerebral and sensory experience as well as a relaxed and rest oriented experience.

Limonene: This terpene has a citrus fragrance to it that is hard to miss. This terpene promotes mood elevation, stress relief, and actually is antibacterial and antifungal–most commonly these benefits are gained through tincture and salve use.

Humulene: Another anti-inflammatory terpene which also suppresses appetite. It works with the cannabinoid THCV and is found in strains rich in this cannabinoid. This terpene has a strong spicy and earthy aroma similar to coriander and cloves.

Linalool: This terpene interacts with THC to balance out anxiety from too much THC. This is very helpful for folks intending to use cannabis to work with their mental landscape. Linalool not only eases anxiety, it also has anti-depressant tendencies. There are also studies which suggest it is an immune system booster, and significantly reduces lung inflammation.

Caryophyllene: Found in cinnamon leaves and black pepper, this terpene helps to treat anxiety, depression, and acts as an anti-inflammatory. It can be recognized by its peppery and spicy nose.

Terpinolene: Coming in as the least common terpene, terpinolene produces sleepy, sedative high. It is an antioxidant, and includes antibacterial properties when used topically. This terpene is known to depress your central nervous system which can assist for those who suffer from nervous system disorders. It also is known to promote that couch lock feeling.

Be sure to ask your budtenders about strains rich in the terpene that would assist you in finding relief.