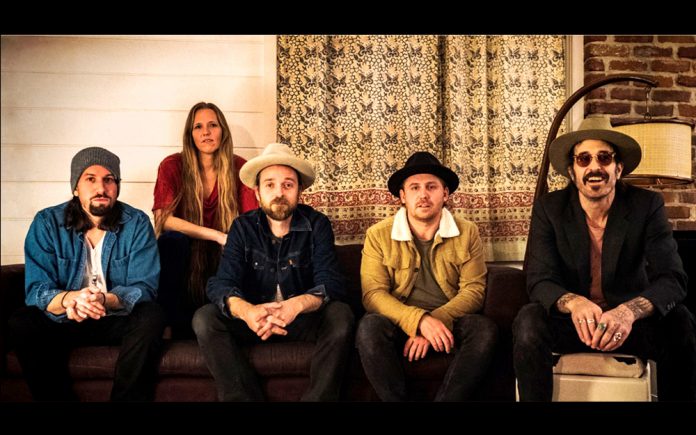 The Alibi is Palm Springs’ coolest new hot spot. It opened last Summer and has been enticing locals and tourists alike with it’s welcoming atmosphere, chill vibe specialty cocktails and inspired cuisine. But what has really put this venue over the top is their commitment to becoming Palm Springs’ premier destination for music.

Located at 369 N. Palm Canyon Drive, the venue is situated in an historic 1930’s building that was once the city’s Telephone Company. Since they opened the doors, co-owners Liz Garo and Melanie Tusquellas have managed to entice well-known acts to play free-admission shows. Americana artists like Jim White and Jon Langford have performed as well as Glam-Punk pioneers, Imperial Drag and legendary L.A. Jump-Blues band, Phast Phreddie & Thee Precisions. Desert Rock stalwarts like Sean Wheeler, Jessika Von Rabbit, DJ Day and DJ Lee Joseph have also had shows there.

The Alibi is also committed to showcasing local bands. To that end, they have instituted a Month-long Monday Night Residency. Giselle Woo & The Night Owls (who were recently added to Coachella’s 2020 line-up) kicked it off in January. For February, the club has lined up The Adobe Collective.

High Desert favorites since 2011, the nucleus of the band is husband and wife Tim and Faith Chinook. They are rounded out by Chris Unck, Caleb Winn and Tyler Saraca. Their self-titled effort arrived in 2014, followed by 2016’s Take Heart, Take Care. Both received rapturous reviews and the band was feted in the pages of Palm Springs Life, the Los Angeles Times, Coachella Valley Weekly and the Desert Sun. Their first two albums offer a blend of Country, Folk and Rock that Gram Parsons once dubbed Cosmic American music. But their newly released third album, All The Space That There Is exhibits a lighter touch. Spreading their wings a bit, the band added hints of Glam, Prog and Psychedelia to their sonic palette, and the results are electric.

The Adobe Collective have invited a few of their musical pals to join the fun at The Alibi. Opening for them on February 3 is Hargo, a soulful Singer-Songwriter also from Joshua Tree, he is releasing his second album, Saturn Return later this year. 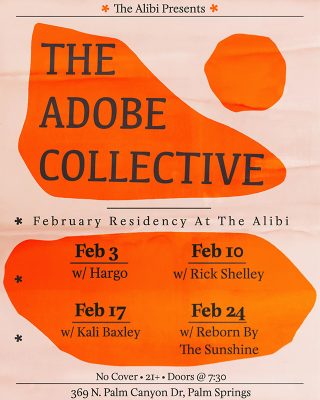 Sharing the stage with them on February 10 is Rick Shelley and his band the Desert Dogs. Rick has been a lo-desert favorite forever, first fronting bands like RagTag and Woodshed, and for the last five years as an accomplished Singer-Songwriter. Blending perspicacious lyrics and indelible melodies, Rick’s solo sets are always a treat, but with his band behind him, the energy level shoots up to 11.

On February 17  they welcome the Southern Gothic Roots Rock of KaiL Baxley. The South Carolina-raised, L.A. based musician has been a favorite on NPR and KCRW. His latest album, Beneath The Bones has just been released.

Finally, on February 24 The Adobe Collective is joined by Reborn By The Sunshine. Although the local five-piece has only been together a couple of years, their Rootsy Americana sound has quickly gained a foothold in the Coachella Valley.  These Old Feelin’s, a four-song EP was released last Spring.