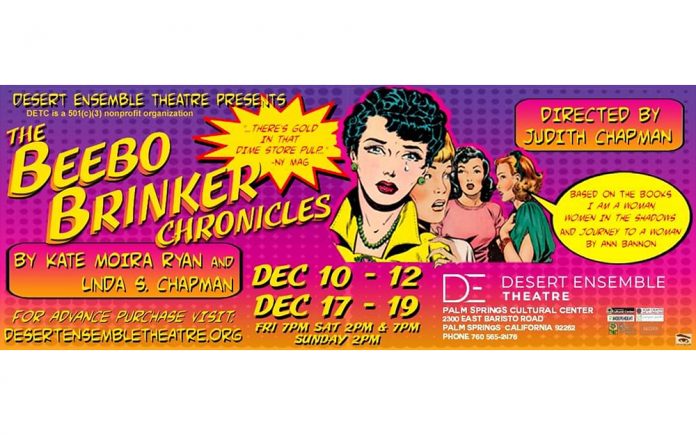 In 1929, British novelist Virginia Woolf, ran her fingers along the spines of the books in her library wondering why no woman in Shakespeare’s era had written “a word of that extraordinary literature when every other man, it seemed, was capable of song or sonnet.” She concluded, “Indeed, I would venture to guess that Anon, who wrote so many poems without signing them, was often a woman.” 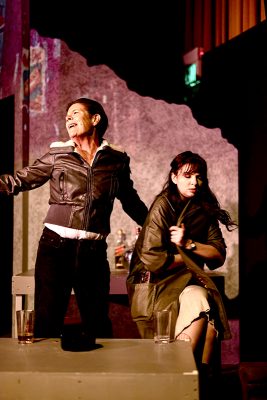 Woolf’s quote has been adapted to read, “For most of history, Anonymous was a woman,” and epitomizes the place of women’s stories in the telling of our history.  Women’s works and deeds have most often been co-opted by males or referenced only in the footnotes of historical documentation.  And if women in general have been relegated to the footnotes, then lesbians have typically been omitted and erased altogether.

In America 60% of theatre audiences are female, yet only 20% of all plays produced are written by women.  Meaning that 80% of the stories told upon the stage (even those with female leads,) are told from a male perspective.  Women’s histories, experiences and stories remain largely unexplored.  That is why a play like The Beebo Brinker Chronicles should be hailed for the triumph that it is.

Based on a series of lesbian pulp fiction novels written between 1957 and 1962, by iconic novelist Ann Bannon, the Beebo Brinker Chronicles was adapted for the stage in 2009 by playwrights Kate Moira Ryan and Linda S. Chapman.  Bannon’s books I Am a Woman, Woman in the Shadows, and Journey to a Woman were set in late 1950’s/early 1960’s era of pre-Stonewall Greenwich Village.  The play follows the lives and loves of Bannon’s characters Laura, Beth, and Beebo as they navigate the uncharted territories of coming out, finding love and finding themselves. The story is set during a time when homosexuality was criminalized and the most critical expectations for women was to forgo all personal career or love ambitions and simply get married and have children. 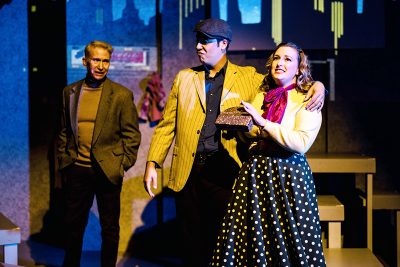 The Beebo Brinker Chronicles, is currently in production with Desert Ensemble Theatre (DETC) at their new home, the Palm Springs Cultural Center.  Produced by Jerome Elliot and Shawn Abramowitz and under the exceptional and creative direction of award-winning actress Judith Chapman, Beebo Brinker sets a new bar for excellence in theatre.

Lizzie Schmelling, as Laura, portrays the emotional turmoil and arc of her character in such a spectacular fashion, that it’s hard to imagine a better performance on Broadway. Phylicia Mason is absolutely phenomenal in her heartbreaking portrayal of Beth, representing every woman who has ever been forced to tear herself in half and choose between societal expectations and personal desires. Tessa Gregory-Walker manages to effortlessly change costumes and reimagine herself as three distinct characters, Marcie, Lili and Nina. All unique to the point that I had to look at my program to confirm it was the same actress. Alexana Thomas as Beebo, was scary and brilliant, forcing the world to accept her on her own terms.  Beebo is the manifestation of every lesbian who could never hide her identity in a skirt and Thomas, makes this character very real. Brent Anderson is so likeable and empathetic as the aging Jack Mann, a gay man who must forgo his pursuit of young lovers and settle into a façade of heterosexuality.  And Miguel Arballo is Charlie, Laura’s husband who can’t begin to understand why she isn’t satisfied with her role as a wife and mother.

A single set, created with such simplicity and perfection by Set Designer Thomas L. Valach and enhanced so beautifully by Kevin O’Shaughnessy’s lighting design and Gus Sanchez’s sound, took us seamlessly from New York, to California, from a bar in Greenwich Village, to an uptown apartment and back again.  Chapman’s direction of this show is nothing short of awe-inspiring, as she infuses such angst, heartbreak and sensuality into the staging and character movements.  Truly an example of a cast, director and script that all moved in absolute perfect harmony.  Rosemary Mallet and Tony Padilla’s costumes were the gift wrap on this package. 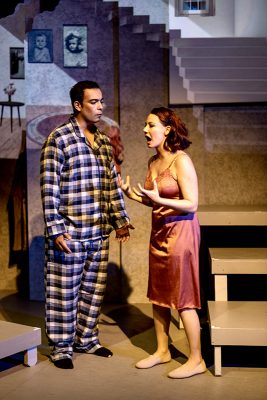 Opening night of the production offered a special treat and showcased an introduction to the play by author Ann Bannon, whose speech gave great insights to the atmosphere of the era when she first wrote her novels. She indicated that during the 50’s/60’s books with lesbian themes were also targeted towards a male audience. It seems that then (as is often still the case,) lesbians were sexualized in order to conform to male fantasies.  Fortunately Bannon’s work went on to find much success with future generations of lesbians.

Founded in 2011, the award winning DETC has grown to become one of the most vital producing companies in the Coachella Valley.  Bravo to them for their outstanding production. Don’t miss this entertaining and historic dramatization of Ann Bannon’s classic novels.

The Beebo Brinker Chronicles is running through December 19th.  For ticket and show information Contact: https://www.desertensembletheatre.org/  or call (760) 565-2476.