Just when we need them the most, Stan and Ollie are back in a beautiful hi-def restoration of some of their key movies.  It’s been said that every second of every day 24/7, someone, somewhere is laughing at a Laurel and Hardy movie!  What a great legacy for mankind to see their foibles magnified on screen for laughs. 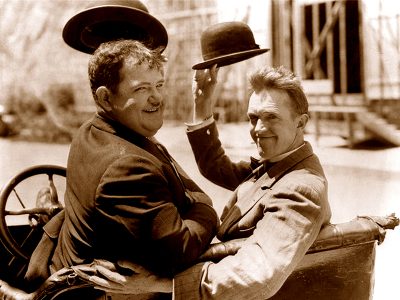 Arthur Stanley Jefferson and Oliver Norvell Hardy were both in the motion picture business when it was just beginning.  But they never performed together until producer Hal Roach fortuitously paired them on screen.  Some of their early short silent films, like Big Business were a hit, but it was when sound came in that they really took off, with their singular voices a perfect fit for their onscreen personas.

But the main thing that ensured the widespread popularity is that despite all the bickering and fine messes, their was no doubt these two characters really loved each other and so did the men who played them.  And somehow that seeped through the screen and lodged in our minds and hearts. 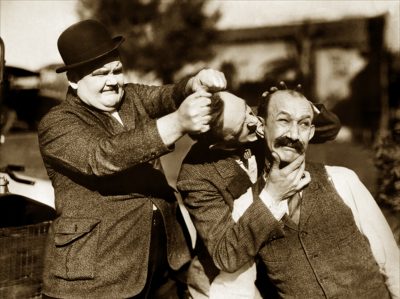 Scrawled on the bathroom wall of the Silent Movie Theater on Los Feliz after a Laurel & Hardy marathon: “Laurel and Hardy forever.  Why can’t we just love each other?”

If you’re wondering how the lineup for the Blu-ray edition of LAUREL & HARDY: THE DEFINITIVE RESTORATIONS differs from the DVD…here’s some info: The official release date is next Tuesday, June 16, (the 130th anniversary of Stan Laurel’s birth.

All of the material on the four-disc Blu-ray edition is included in the six disc DVD version, but in different configurations. These discs are all region-free.  Generous extras, photo galleries,  interviews and featurettes. 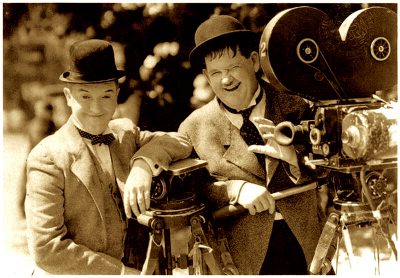 All films — including the interview films and trailers — have optional English subtitles. The theatrical films (including The Tree in a Test Tube and That’s That) have optional commentaries by Richard W. Bann (for The Battle of the Century and The Music Box) and by Randy Skretvedt (all others).

Presented by Kit Parker Films and The Sprocket Vault.
Film preservation by Richard W. Bann, and the UCLA Film & TV Archive & Library of Congress.  Digital restorations produced by Jeff Joseph/SabuCat and performed by Thad Komorowski/Cineaste Restoration. A.R.T. by Point 360. Final Conforming and Clean Up by The Finishing Touch.  DVD and Blu-ray element assembly, design and authoring by Tiffany Clayton.

Disc 1
Feature:
Sons of the Desert

Shorts:
The Battle of the Century, presented nearly complete with original amber tint and a new score by Donald Sosin.
Berth Marks, with original 1929 soundtrack and 1936 reissue soundtrack 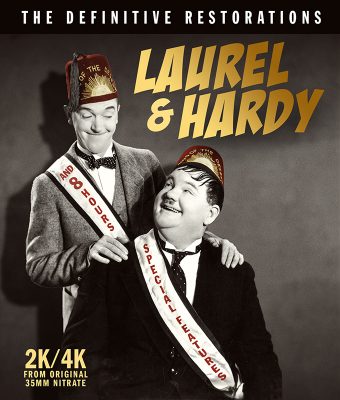 Shorts:
Towed in a Hole
Twice Two
That’s That
The Tree in a Test Tube

Extras:
Marvin Hatley music tracks (from Sons of the Desert, Them Thar Hills, Way Out West, Block-Heads, A Chump at Oxford and Saps at Sea)

Original Trailers for Beau Hunks, Pack Up Your Troubles, Babes in Toyland, Way Out West, The Flying Deuces, A Chump at Oxford and Saps at Sea.

This great set is essential for the home theater llibrary.