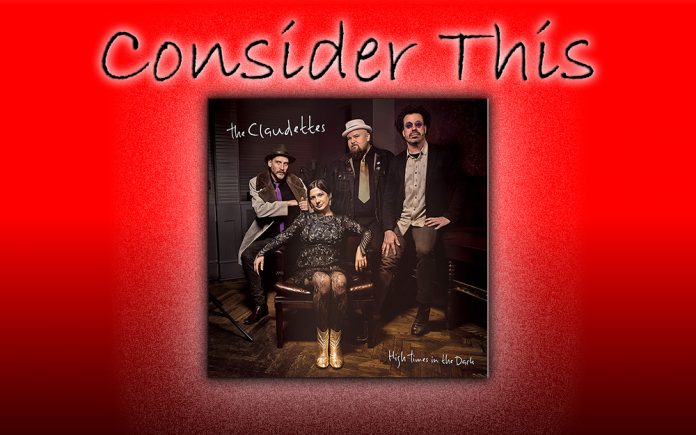 Stylistically, the music of The Claudettes is all over the map. That’s a good thing. The Chicago four-piece refer to their sound as Garage Cabaret, but that doesn’t completely cover their nonpareil approach.

The band began life as a duo in 2011. Johnny Iguana (piano, keys) and Michael Caskey (drums) had made their bones as part of Chicago’s legendary Post-Punk combo, oh my god. Their original sound was strictly instrumental. That iteration managed to release three albums, Internal Piano Plot…HATCHED, No Hotel and Pull Closer To Me: Live In The Piano Room. Through the years, there were myriad personnel shifts. But they locked into the current line-up, adding oh my god alumnus Zach Verdoorn on bass and guitar, along with vocalist, Berit Ulseth, just in time to record and release their acclaimed fourth effort, Dance Scandal At The Gymnasium, in 2018.

After relentless touring, The Claudettes returned to the studio with producer Ted Hutt. An original guitarist for Celtic-flavored Punkers, Flogging Molly, the British born musician has spent the last decade or so carving out a career as a producer, working with bands like Gaslight Anthem, Old Crow Medicine Show, Dustbowl Revival and Violent Femmes. The result is their newest long-player, High Times In The Dark.

The album opens with the one-two punch of “Bad Babe, Losin’ Touch” and “24/5.” On “Bad…” majestic piano notes are quickly supplanted by wiggly guitar riffs and Berit’s sultry vocals. Tart lyrics take a formerly attentive lover to task; “I used to hear the doorbell ring, out the window hear you sing and I’d come racing down the stairs/Find only flowers sitting there, you don’t come over that much, bad babe losin’ touch.” On the break, Johnny’s pounding keys slink sideways into a “We Are Siamese If You Please” vamp matched by rolling drums and rippling, Spectoresque castanets. The wily Wall Of Sound reaches a cinematic piano crescendo.

Conversely, “24/5” bargains with a clingy Casanova to downsize together time. A cascading piano intro is bookended by (Boris The) spidery bass, slashing guitar and a bludgeoning beat. This trenchant couplet says it all; “We’ll always be together, ok, every year, not every day…This is like a comedy act and you’re the Smothers Brothers/Smothering me with your love, Dick and Tom, go and visit your mother.” A skittery guitar solo swivels around Big Easy-flavored piano notes, underscoring the lyrics’ blunt message.

A couple more tracks, “I Swear To God, I Will,” and “Declined,” chart the highs and lows of romance. On the former, A breezy, Bacharach-y melody belies an admission of compulsive behavior. Pounding piano, roiling bass lines, shang-a-lang guitar and a staggered rhythm punctuate Berit’s sly vocals. She quickly confesses that her predilection for unrequited obsession can be flipped on like a switch; “Smile at me and I swear to God, I’ll dream about you tonight.”

The latter gives prospective beaus the brush-off in the form of a rote rejection letter. Grandiloquent piano fills and buzzy guitar flutter atop rubbery bass and a cantilevered beat. Berit’s Soulful delivery almost removes the sting of “Dear Sir: I appreciate your interest in working with me, Dear Sir: there is no committee, it’s only me/Dear Sir: I wish you the best in all your future endeavors, But Sir: there is no interest whatsoever…you have been DECLINED, 100% DECLINED.”

The album’s best tracks nearly  line up in a row. If Todd Rundgren had ever collaborated with Martha And The Vandellas, it might sound something like “One Special Bottle.” Urgent piano runs, tensile bass and spiky guitar licks are wed to a rock steady beat. Stacked harmonies evince a sugary Girl-Group rush, but a yearning, “Something/Anything ache emerges in lyrics like “I really thought I’d get to drink it last year, but just like me, it’s sitting here/There’s no buzz, there’s nothing to savor, no one does anyone any favors.”

Berit and Zach share vocal duties on “I Don’t Do That Stuff Anymore.” Their dissonant harmonies wash over a thwock-y backbeat, shuddery keys thrumming bass and subdued guitars. Perspicacious lyrics reflect on a shared history of lurid, nocturnal adventures; “I must’ve driven home but I don’t remember a thing, vile mess in the back seat, a side mirror missing/He said “DON’T CALL ME,” my head is pounding, I don’t do that stuff anymore.” Searing guitar riffs and brittle piano chords on the break mirror the ambivalent throb of the song’s denouement; “Such a dangerous place but I want nothing more than to abandon all hope and walk right out the door/To when we were all just fun-loving whores we treated the night like it was ours, not yours, I don’t do that stuff anymore/God, I loved life so much, I was just so in love with it, I kissed it so hard and held it so tight/I loved it, I loved it, I loved it, I don’t do that stuff anymore.”

Angular guitar, slinky bass, plunky piano and a tenacious tribal thump powers “Most Accidents Happen.” The lyrics take a swipe at media-driven fear mongering, which feels wildly apropos in this era of jingoistic news; “The experts agree that most accidents happen, there’s no persuasive gap in the data here, the numbers don’t lie, that most accidents happen/If you don’t want to die then you’ll listen, and be afraid of those unlike yourself, or anyone who claims to need your help.” Gritty guitars on the break manage to dirty up the pretty, on this sleekly Jazzy song.

Finally, “You Drummers Keep Breaking My Heart” pairs a wry and witty narrative with a sweetly meandering melody. Sparkly piano trills lattice over bristling bass lines, see-saw guitar licks and a teeter-totter beat. The lyrics offer something of a cautionary tale and the romantic pitfalls associated with dating a drummer. The first one “loved to kiss me, but he loved his whiskey more,” with the second one “there was an accident and he went and found religion, I wasn’t done carousing yet, I couldn’t go there with him.” On the break, the tempo powers down, locking into a moody blue groove and an epiphany is reached; “The third and fourth were both named Nick, one got sick of me, the other just got sick/Ooh, I should switch to guitarists, that would be smart, ‘cause drummers keep breaking my heart.”

Other interesting tracks include the rickety blur of “Creeper Weed” and gilded splinter walk of “Grandkids, Wave Bye-Bye!” The album closes with the timorous Torch song, “The Sun Will Fool You.” Spare and bare bones, it’s pared down to just piano and vocals, placing the spotlight on Berit’s protean vocals and Johnny Iguana’s sui generis piano style. It’s a quiescent end to a great record.

The Claudettes effortlessly offer a smorgasbord of sounds, building off the tandem timekeeping of Michael Caskey and Zach Verdoon, allows the vocals and piano to shine through. Berit’s elastic style lands somewhere between Teutonic chanteuse Ute Lemper and the willowy grace of Sundays front-woman, Harriet Wheeler. Johnny’s inventive keyboard prowess anchors each song, mercurial one minute and tranquil the next. Ultimately, High Times In The Dark is a rollicking good time.