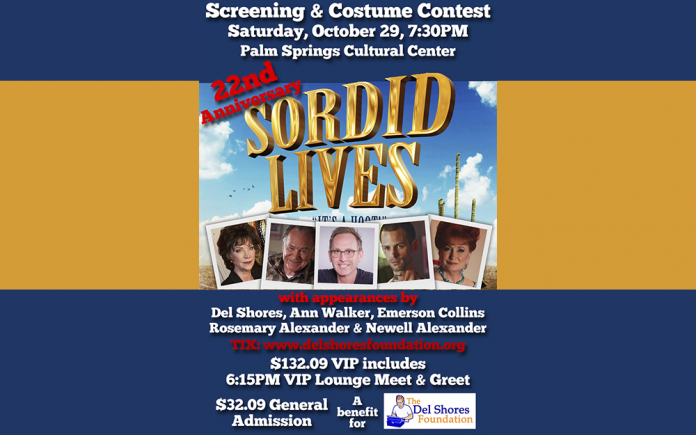 The Del Shores Foundation presents a one-night-only 22nd anniversary benefit screening of the original SORDID LIVES film where it all began at the Camelot Theatres at the Palm Springs Cultural Center on Saturday, October 29 at 7:30pm. The evening will be hosted by creator DEL SHORES and Del Shores Foundation Program Director EMERSON COLLINS with appearances by original film cast members ROSEMARY ALEXANDER, NEWELL ALEXANDER and ANN WALKER.  The evening will open with a Sordid Lives Costume Contest with prizes for the top three costumes, followed by the screening.

All proceeds from the evening will benefit the Del Shores Foundation and its mission to find and elevate new LGBTQ+ writers living in the South. This year the Del Shores Foundation completed its first Writers Search and awarded over $20,000 in cash awards and production grants. The Foundation hosted the first Del Shores Foundation Writers Festival in Dallas in September. The Writers Festival brought in twelve LGBTQ+ winners and finalists from the Writers Search for a weekend of private workshops, public panels and stage readings of all three winning scripts.  Screenplay winners Serayah Silver and Monet Noelle Marshall will be in attendance at the screening.

VIP Tickets are available and include 6:15pm meet and mingle, appetizers and first drink free with Del, Emerson and the cast in the upstairs lounge at the Palm Springs Cultural Center.

SORDID LIVES is a black comedy about white trash as a gay actor struggles to come out to his eccentric, dysfunctional Texas family. When the family matriarch trips over the two wooden legs of her lover in a seedy motel room, her funeral brings three generations of the family back together in a story about learning to love the family you have as they are, not as you wish them to be.

ABOUT THE DEL SHORES FOUNDATION

The Del Shores Foundation is a new 501c3 non-profit with a mission to find and facilitate the development of new southern queer artistic voices through bringing together artists and working professionals, amplifying new work and connecting artists to platforms for the creation of the work. For more information on the Foundation, Writers Search and Writers Festival, visit www.delshoresfoundation.org

DEL SHORES (Writer/Director/Del Shores Foundation President) is the writer/director/producer of the films Sordid Lives, Blues for Willadean, Southern Baptist Sissies and A Very Sordid Wedding. He wrote and executive produced the MGM feature Daddy’s Dyin’…Who’s Got The Will? He has written eleven plays; his publisher is Samuel French/Concord Theatricals.  His plays produced thousands of times worldwide (many productions in Palm Springs) with four adapted for the screen which have run collectively for over seven years in Los Angeles. Southern Baptist Sissies won the GLAAD Award, The Trials and Tribulations of a Trailer Trash Housewife won the NAACP Theatre Award, and both Yellow and Trailer Trash won the LADCC Award for Best Original Play and Best Production.  In television, Del wrote, directed, executive produced and created the LOGO series, Sordid Lives: The Series. He also wrote and executive produced on the last three seasons of Showtime’s Queer As Folk, and wrote and produced for Dharma & Greg and Ned & Stacey. Shores has performed in hundreds of standup gigs in three national tours, all filmed for DVD.  His one-man play Six Characters In Search Of A Play has performed in 33 cities, seven film festivals and won three film festival awards and is now a film available on BroadwayHD. Lifetime Achievement Awards from FilmOut San Diego and LA Weekly. www.delshores.com

EMERSON COLLINS (Host/Del Shores Foundation Program Director) is an actor, producer and director best known for four seasons of BRAVO’s The People’s Couch and RENT on FOX.  He produced and starred in the films A Very Sordid Wedding and Southern Baptist Sissies, winning Best Actor at the Red Dirt International Film Festival for Sissies. He produced and starred in the national tour of the play of Sissies and produced the national tour of Sordid Lives. Emerson won the Desert Theatre League Award for Best Actor in a Comedy for the regional premiere of the one-man show Buyer & Cellar. Collins co-produced and recurred in LOGO’s Sordid Lives: The Series” and produced Blues For Willadean.  He directed all three of Del Shores’ standup comedy DVD specials and directed Shores’ one-man play Six Characters In Search Of a Play on stage and for film where it won awards at three film festivals. He has produced countless variety show and event nights across the country. Emerson has been named on of the OUT 100, wrote as a columnist for the Dallas Voice and has appeared at film festivals all over the world and as a speaker on LGBTQ representation in film. He is the Program Director for the Del Shores Foundation and is currently touring with Blake McIver and their duo cabaret show “I Dreamed a Dreamgirl.” www.emersoncollins.com

GENERAL ADMISSION TICKETS are $32.09 for the screening and costume contest.

VIP TICKETS are $132.09 and include the 6:15pm meet and mingle, fried chicken and mashed potatoes, and first drink free.

All tickets available at: