Heading straight toward the big three-oh, Club Skirts Dinah Shore Weekend (aka The Dinah) continues to make its presence felt across our country and around the world by raising the visibility of women in all facets of life, from artists, to comics, to filmmakers, to athletes and beyond.

For over a quarter century Mariah Hanson – founder and producer of the largest lesbian event in the world – has not only been delivering epic good times to lesbians, but has as well continuously been moving the needle with her ongoing commitment to amplifying, championing and celebrating women’s voices and talent via The Dinah.

The growth and longevity of the event – a worldwide cultural phenomenon – is all the more astonishing and remarkable at a time when lesbian bars, spaces, festivals and publications are rampantly vanishing all across the country.

This is why, now, more than ever events like The Dinah are necessary to reconnect our community.  The Dinah is entirely produced by women, for women, and that is a powerful statement in today’s climate.

Kicking off at the close of Women’s History month on March 29th and wrapping on Sunday, April 2, the Dinah 2017 will celebrate and honor the trailblazing women in the Arts, Sports and Entertainment industry who have achieved historic firsts.

“Now more than ever, it is enormously important to celebrate and raise the visibility of women breaking glass ceilings especially within our own community because we need to be reminded that we are strong, capable, united and powerful in a time when our voices, especially spoken in unity, are needed more than ever before.” says Mariah Hanson.

The 27th installment of the Dinah is already expected to be one of the major highlights of the 2017 Palm Springs festival season with a powerful all-female line-up covering the entire gamut of the entertainment spectrum including sports, music, fashion, comedy, film & TV.

Championing and perpetuating the rise of women DJs behind the decks, The Dinah will also put the spotlight on some of the top female DJ tastemakers including DJ Kittens and the dynamic duo known as Stevie Trickz.

On the comedy front, the always politically incorrect stand-up comedian Julie Goldman, one of the most hilarious, provocative and familiar faces on Bravo’s “The People’s Couch” and the “Vanderpump Rules” will up the volume on your laughter. She’ll be joined by British comic Gina Yashere, who broke onto the American comedy scene with her appearance on NBC’s Last Comic Standing, and the wildly hilarious Erin Foley who has been taking the comedy scene by storm across the nation.

Collectively these daredevils have considerably changed the game for women achieving power through their remarkable ability to build community around the personal brands they’ve created and the causes they champion.

“The Dinah has always stood for living out loud in celebration of our unique and incredible lives.  This year we are bringing that message up a few notches,” says Hanson.

These are women who have taken a chance, shaken off-stereotypes, fought adversity, and broken the glass ceiling in their respective professional fields paving their own ways.

Because that is what the Dinah has been and continues to be about: living outloud breaking barriers!

For more information about The Dinah go to: www.thedinah.com 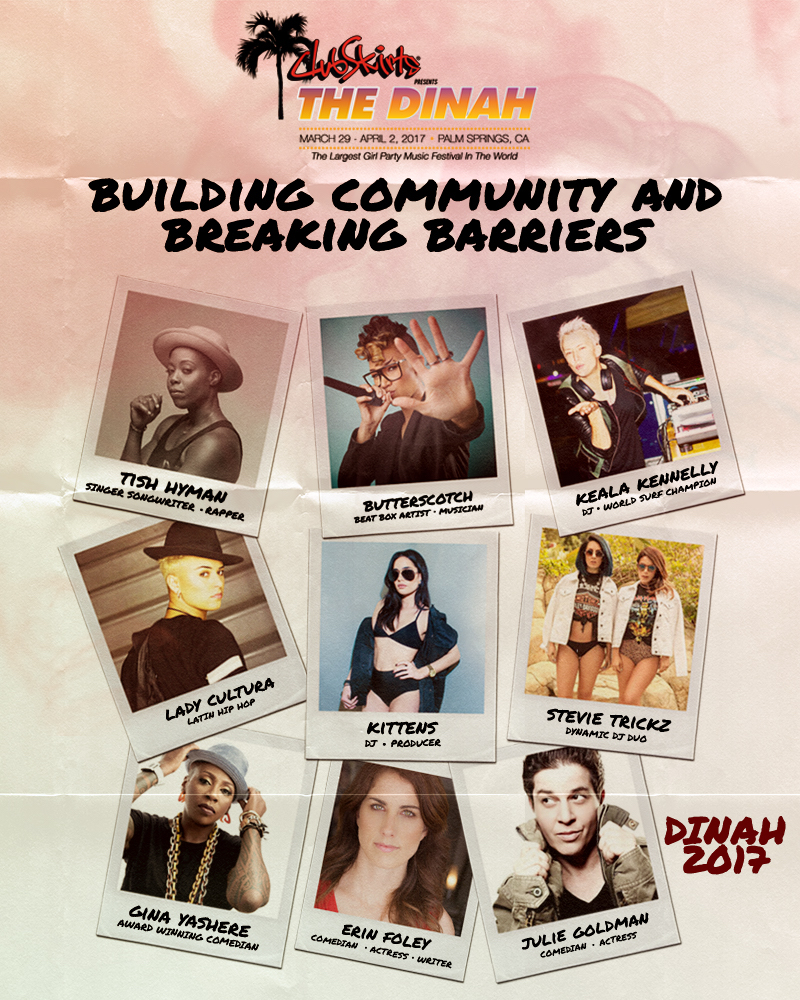