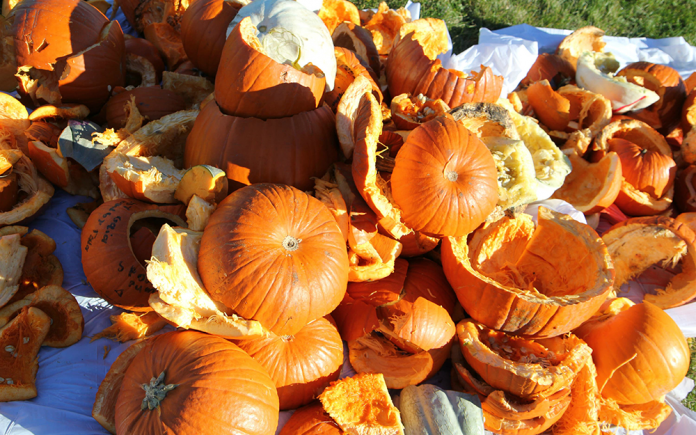 With scorching temperatures forecast for the upcoming Labor Day Weekend, you are completely forgiven if you haven’t given a single fleeting thought to the upcoming onslaught of autumn beer releases. As time (and the seasons) march on, Pumpkin and Oktoberfest beers will soon be gracing the taps and shelves of the Coachella Valley regardless of whether the mercury agrees. We will tackle Pumpkin Beers this week, with the focus on Oktoberfest quickly following.

Love them or hate them, in my estimation the pumpkin beer category is among the most maligned among the myriad of seasonal beer styles. I’m not referencing the annual debate over what constitutes “too early” for its release, but the lack of knowledge regarding the origins of pumpkin beer and how it has evolved into what seekers of the style enjoy today. So, let’s take a stroll through the pumpkin patch to review where the beery tribute to the gourd began, how it arrived here, and I’ll get you a few solid recommendations.

Apple Pie may be considered the iconic American dessert, but Johnny Appleseed didn’t begin to sow his magic until at least 1817 and those trees took time to finally bear fruit. To the early colonists, pumpkins were magic as there seemed to be an incessant supply of the things. Many in the Northeast are familiar with the “accidental” pumpkin patch as they grow like weeds; wandering, weaving, and seemingly out of control. As a result, colonists used them in all manner; pies, mashes, bread…and beer. Pumpkins were abundant while cereal grains such as barley, wheat, and oats were mostly destined to become food for people and livestock.

The original pumpkin beers were pretty clean providing they had enough time to fully ferment and condition. Pumpkin is relatively flavorless and an excellent source of fermentable sugars. Spicing as we know it wasn’t even a thought in the early days as spices were both rare and prohibitively priced. Creative brewers in the early days were known to add molasses, ginger root, spruce, and even ground ivy in an effort to give the beer a unique flavor.

As time progressed, the emigration of British, German and Czech brewers (who would eschew the gourd) along with adequate supplies of cereal grain (thanks to quantum leaps in American agriculture) led to the demise of the pumpkin as a source of sugar in American beer. Its memory would fade until revived by American craft brewers late in the 20th Century.

Enter Bill Owens, owner of Buffalo Bill’s Brewery in Hayward, California. Owens noticed the use of pumpkin beer in the journals of George Washington and dove in headfirst by ordering seeds and growing pumpkins for his first pilot batches. They were harvested, roasted and then added to a variation of Bill’s Amber only to discover that pumpkin is…relatively flavorless.

American consumers, having become accustomed to the spicing of pumpkin pie as the benchmark for pumpkin flavor would expect much more. After all, pumpkin pie is really quite bland until cinnamon, clove, nutmeg, and allspice are added. Bill and most brewers concentrated more on the spices and many have abandoned the use of actual pumpkin in the recipe of most pumpkin-driven beers. As mentioned earlier, pumpkin beer is often derided for being premature to the market and is brewed well in advance of the seasonal pumpkin harvest.

Pumpkin beers flourished well into the 20-teens until sales began to grow softer…bringing us to today’s revved-up versions. American brewers are anything but bashful in terms of innovation and the lowly pumpkin would not escape the brewers wild desire to innovate instead of replicate. As a result, in 2011 The Bruery in Placentia, CA introduced Autumn Maple, a pumpkin-style beer brewed with 17 lbs. of yams per barrel and then spiced it with cinnamon, nutmeg, clove, allspice, vanilla, molasses, and maple syrup. It was bold, spicy, and weighed in with a hefty 10% alcohol content and also launched a thousand pumpkinesque imitations.

Adam Avery at Avery Brewing in Boulder, CO. wondered what would happen if he took a monstrous pumpkin porter, plump full of spicy gourdiness, and aged it in fine freshly emptied rum barrels. The result was Rumkin, sporting a 16.9% ABV with suggestions of dark oak and candied molasses. In an effort to out-do himself, in 2014 he aged the same recipe in bourbon barrels, yielding a massive 18% ABV and a slight name change to Pump[KY]n.

Of the hundreds of pumpkin beers released every year, I do manage to have a favorite of the style…Shipyard Brewing (est. 1994) located in Portland, Maine. Alan Pugsley’s Ringwood brewing system produces a lot of off-centered beers, and Shipyard makes two versions. The first is Pumpkinhead Ale, a 4.5% ABV wheat ale which is delightfully aromatic and features a subtler spice flavor, often served rimmed with sugar and cinnamon. It’s big brother, Smashed Pumpkin, is my clear favorite of the season. With a name right out of a Gallagher comedy routine, Smashed Pumpkin is anything but subtle. It’s hugely over spiced, much too sweet (but not cloying), and way too thin; like a pumpkin pie in a glass. It’s unique, novel, and that’s exactly how I like my seasonal beers.

(When Ed Heethuis isn’t brewing at Spotlight 29 Casino for 29 Brews, you will find the Certified Cicerone / Brewmaster out on his road bike, strolling in a pumpkin patch, or talking beer with the patrons at Taproom 29. He may be reached at: heethuis.ed@gmail.com or wherever beer may be found in the wild.)