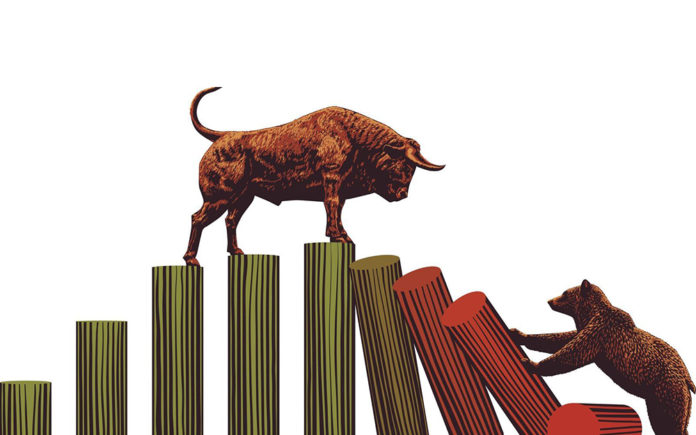 The stock market finished January with its best monthly results in nearly sixty years, up nearly 7%!

Many of those in the know as it relates to the U.S. stock markets have described recent increases as a parabolic shift in stock prices.

This shift was initially started by the Central Banks of the world when they added historically large amounts of liquidity to the world economies.  The Central Banks added liquidity by buying a lot of their own government debts.  When a government buys their own debt and does not reissue it into the marketplace, they are effectively printing money.  Over time, this type of Central Bank action causes inflation.

In Germany and a few other countries, their Central Banks went a step further and bought the debt of corporations in their countries as well.

If easy money wasn’t enough to heat up the economies of the world as well as the stock markets, the G.O.P. and the Trump administration reduced government bureaucracy and cut taxes.  While anti-Trump folks may grind their teeth over the positive impact that these actions have already had on the economy, low taxes and reduced regulation are proven ways to spur economic growth.  It should be remembered that only two years ago, economists worried that we were teetering on the edge of another recession.  In January 2016, the stock market tumbled by more than 7% while most stocks posted 0% returns or losses for the full year.

Many believe that the current historic run by the stock market may be setting us up for a massive decline like we saw ten years ago.  That outcome, while possible, is highly unlikely.

The big differences between now and then is that the driver of our economy ten years ago was rampant fraud in the mortgage industry.  The economic boon that is going on now is being driven by two things: 1) rapid deployment of technology throughout business around the world; 2) lifestyle improvements for the middle and lower classes in many emerging markets like China and India.  When you add to that mix lower taxes and regulations in the United States, you have the underpinnings of strong global growth that can be expected to last for at least a few years.

Many will point out that company stocks are selling at historically high levels and it is inevitable that those valuations will come back to lower levels.  This concern is probably a valid one.

As an example, stock prices are currently 25 times higher than the earnings of the average company, up from 22 times in 2016.   Over the last seventeen years, the price-to-earnings ratio has been in the mid to high teens with a peak of 46 times in 2002 and as low of 15 times in 2012.

While this historic run by the stock markets may feel like a bubble ready to burst, the truth is that higher corporate earnings have supported higher stock prices.  At year-end, 80% of all companies had reported positive surprises to their earnings with an average increase of 17%.   These results justify current stock price levels as well as even higher prices.

The biggest weight hanging over the markets at present are the Central Banks of the world.  If they reduce liquidity too quickly, all of the positive momentum in the economies of the world could stop quickly.

By watching Central Bank actions and corporate earnings, we can understand where the markets will go next.

Haddon Libby is a Fiduciary, Investment Advisor and Managing Partner at Winslow Drake and  can be reached at 760.449.6349 or HLibby@WinslowDrake.com.  For more information, please visit www.WinslowDrake.com.