“It’s something hard to explain, and certainly I will not get it right.” That’s from “Daily” a song on the new Innocence Mission album, but it could just as easily be anyone trying to describe the ephemeral beauty of their music.

The Innocence Mission is not a prolific band; together since 1989 the four-piece has only released 10 albums. The Innocence Mission don’t really play live, they haven’t toured for nearly 20 years. Being a fan of this Lancaster, PA trio requires patience, but the rich rewards definitely outweigh the sacrifice.

Their self-titled debut was recorded in several different studios in Los Angeles and produced by Larry Klein. Although he is best known as Joni Mitchell’s husband, (from 1982 to 1994), Klein is also a prolific producer. By the late ‘80s, he had worked with everyone from Cher to Peter Gabriel to Tracy Chapman to Don Henley. For the Innocence Mission he added very little to the band’s painterly style.

Following a high profile tour opening for Don Henley, the band and Klein reconvened in Los Angeles and recorded their equally adroit sophomore effort, Umbrella. The album garnered great reviews and modest sales, but the band was constantly compared to other female-centric artists like 10,000 Maniacs, the Sundays and Mazzy Star.

When it came time to make their third album, the Innocence Mission took a hard left turn and recruited producer Dennis Herring (Camper Van Beethoven, Concrete Blonde, Throwing Muses). This time they recorded in New Orleans and Seattle. The result, Glow, was released in 1995. It was their most assured album to date, an artistic and commercial breakthrough.

The band toured extensively behind the album, headlining small clubs and then opening for Emmylou Harris on her “Wrecking Ball” tour. Their music was featured in movies and TV series like Empire Records and Party Of Five.   They began recording a follow-up to Glow, but A&M was subsumed by the Universal Music Group and the band left the label.

Four years they reappeared on the tiny, Kneeling Elephant label as a drummer-less three-piece (Steve Brown began a career as a chef). They released the self-produced Birds Of My Neighborhood.  In 2001 they delivered surprisingly cohesive odds and sods collection entitled Small Planes; Lost And Found Songs 1996-2001. But the band seemed permanently off the road.

Don and Karen Peris had started a family and touring took a backseat to parenting, as did music. Periodically the band would go into the Peris’ home studio and create gems like 2003’s Befriended or We Walked In Song and My Room In The Trees which arrived in 2007 and 2010, respectively. Slipping through the cracks, they released an EP of hymns entitled Christ Is My Hope, in 2000 and a collection of standards and lullabies, Now The Day Is Over in 2004.

Innocence Mission music is difficult to quantify. It is always spiritual but never preachy.  It’s contemplative but rarely anguished. Karen Peris is the band’s primary songwriter and her lyrics conjure quiet moments almost forgotten. Summer picnics by a bay, childhood bike rides, sitting in a window-seat watching the rain or evenings staring up at the stars.  Don Peris is a one-man guitar army, crafting quiet acoustic solos one minute and reverb-drenched riffs the next. Mike Bitts’ bass lines add ballast. 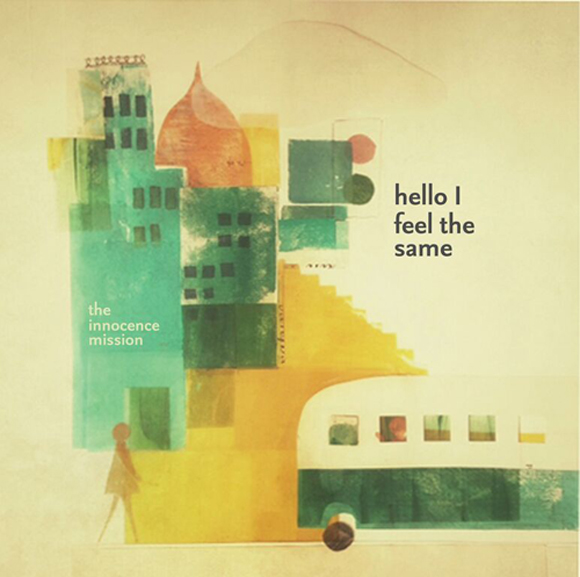 Now they have returned with a brilliant new album, Hello I Feel The Same. The record opens with the title track, spiraling acoustic guitars and dulcet piano notes intertwine in a gliding roundelay. The lyrics recall the simple pleasure of befriending a kindred soul; “Yes, I said to that girl sometimes I would be invisible too, running beneath the trees, hello, I feel the same.”

Change is in the air on both “Tom On The Boulevard” and “When The One Flowered Suitcase.” The former, moves at a meandering pace, powered by circuitous acoustic riffs, ascending electric guitar chords and an off-kilter kick drum rhythm.  The lyrics wistfully mark the passage of time; “It seems my friend changes never end, now we’re growing up and down.”

“…Flowered Suitcase” opens with sun-dappled acoustic guitar that weaves a rich melodic tapestry with piquant electric riffs and pliant piano runs.  Although change is inevitable, it isn’t really welcome…”let us not change so much, let’s stay in our old clothes and walk around this old dear life.”

Three songs walk a knife’s edge between happy-sad, which has always been the Innocence Mission’s raison d’etre. Spiky acoustic chords anchor the melody of “Blue And Yellow,” with electric filigrees and field organ salting the mix.

The lyrics paint a vivid picture of an autumnal Saturday; “Carrying your blue and yellow painting in the air, you are crossing the morning and the early streetlights shine in threes.” But true happiness feels just out of reach. “I’m missing you, please come by/I hope that you will say if I can be a friend to you as you have been mine.”

“Spring Is Written On Your Door” is a pithy haiku to the changing seasons accented by acoustic arpeggios that peel like church bells. The straightforward instrumentation is equal parts beatific and melancholy, making the listener smile and tear up simultaneously.

Finally, “Daily” is slightly dour and piano-driven. Karen’s plaintive vocals and lyrics explicitly yearn for the face of God in this chaotic world. “..I’m looking out for you now, and probably you are just on the way/And getting through the streets of town takes a long time.”

Both “Washington Field Trip” and “State Park” limns common childhood experiences that most of us have forgotten.  The former is a gauzy waltz that recalls a school trip to the capitol. The latter frames an afternoon at the arboretum with liquid acoustic riffs, fluttery electric fills and woozy keys.

The album’s most whimsical track, “Fred Rogers” details an evocative dream involving a brief encounter with the host of “Mister Rogers’ Neighborhood.” In between seeking advice about “how to make things better,” they discuss the weather, and Karen’s disinclination for driving.

The album closes with “The Color Green.” A stark meditation on, um, the color green. The diffident melody is cloaked in languid piano chords, aching guitar glissandos and shades of viola and violin, courtesy the Peris children, Anna and Drew. Moments of this simple song are so pure and beautiful they almost defy description. Hello I Feel The Same is a rich addition to their cannon, and one of the best albums of 2015.

Sick of the disposable culture of Kardashian? Wary of war and the never-ending cycle of politics and selfies and the constant blah-blah-blah?  The Innocence Mission is an antidote to all that. Their quiescent charms are a sure thing in an uncertain world.