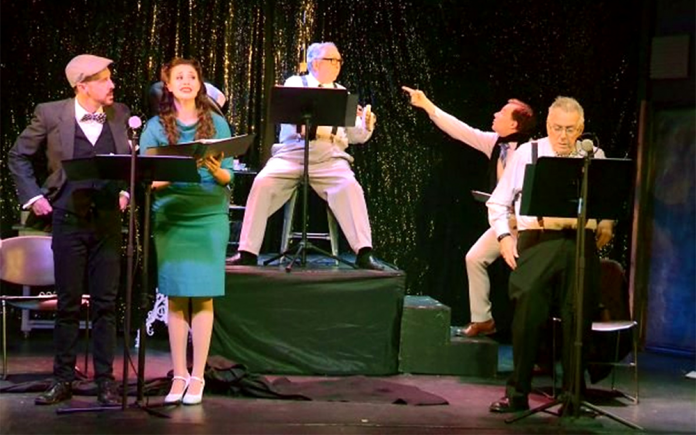 The 1920’s, 30’s and 40’s were the heyday of American radio. Before the introduction of television in the 1950’s, much of the world-wide news and entertainment came across the radio airwaves.  Folks would gather around and listen to news broadcast, adventure stories, mysteries, comedies and music. With only their imagination to paint the scenes, the audience is dependent upon their sense of sound to visualize the story, as it unfolds.

One of the most remembered American radio dramas was the Orson Wells, 1938 Broadcast of H.G. Wells novel, “War of the Worlds.” Performed and broadcasted live on October 30, 1938. The audio performance told the story of an alien invasion and was reported to have caused panic in the streets, as listeners mistook the drama for a real-life Martian attack.

Desert Theatreworks, has been taking their audiences on a trip back to the golden age of radio, with their annual production of staged radio plays that not only tell an imaginative audio story, but present a behind the scenes look at how the script is staged and how sound effects are created.

This year’s production of “The Mis-Adventures of Sherlock Holmes,” was adapted by Lance Phillips, based on characters created by Sir Arthur Conan Doyle, with additional material from Sherlock Holmes and the West End Horror by Martha Milgrom Dodge, Anthony Dodge and Nicholas Meyer.

The comedy showcases Sherlock Holmes (James Owens,) and his side-kick, Mr. Watson (Hal O’Connell,) on the case of a murder mystery, as the behind the scenes live sound effects and unseen studio drama unfolds around the actors. The cast also features Bobby Guenther, Adriana Reyes, Ron Young, Kellen Green, Michael Hamlin and Emily Unnasch, all wonderfully performing a variety of roles. 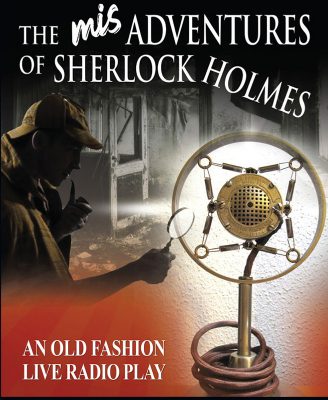 Owens, was absolutely phenomenal as the brilliant detective Sherlock Holmes, aside from the occasional narcolepsy that Holmes suffered in this particular storyline, Owens, was spot on with presentation and portrayal of this iconic character.  I’d love to see him perform this role in a fully staged production.  Emily Unnasch, as the Co-Foley person and jingle singer could have been transported directly from another era.  Her elocution reminded me of a 1940’s screen star and the radio commercial jingles were not only beautifully performed, (Unnasch has a stunning singing voice,) but the commercials had me laughing out loud. “Winston taste good like a cigarette should.”

While serving as a witness to the behind-the-scenes antics of performers can be a lot of fun, the foley performances by Guenther and Unnasch were incredible. A time or two it did become a bit too distracting to see the onstage director, Kellen Green, continuously waving his arms and throwing paper wads, while the other characters were performing.

Desert Theatreworks continues to present talented actors performing very entertaining scripts, and this production is no exception.  Lance Phillips directs this fun-filled show and proves once more what a multi-talented theatre artist he is. Just about anything DTW does is more than worth the drive to Indio for their top-quality productions.

The Mis-Adventures of Sherlock Holmes is playing through May 29th.  Don’t miss this wonderfully creative and entertaining radio play.

Upcoming July 10-31, Desert Theatreworks will present “The Carol Burnett Show,” featuring a few of the best classic comedy sketches from this iconic program that have been recreated for the stage.