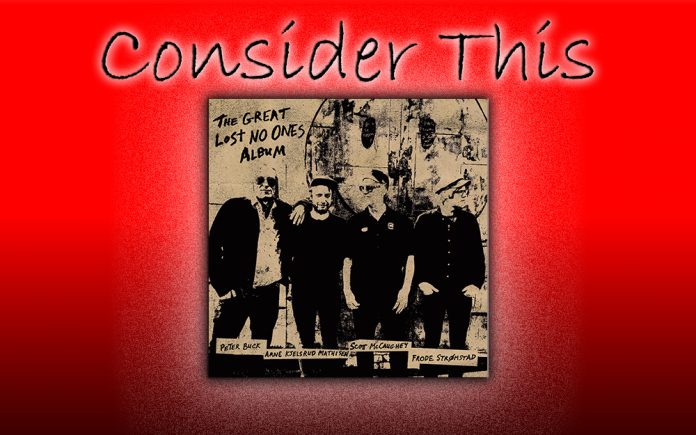 James Brown is gone, but if he were still here, he might consider anointing Peter Buck as “The Hardest Working Man in Show Business.” After 30 years together, R.E.M. called it a day in 2011. While vocalist Michael Stipe and bassist Mike Mills’ activities have been pretty low key (original drummer Bill Berry left the band in 1997), the obverse has been true for guitarist Peter Buck. He continues to be a force on the Alternative Rock scene, a genre the Athens, Georgia four-piece (along with U2), practically invented.

In the decade since R.E.M. stopped recording and touring he has released four solo records, recorded with various side projects (some begun during R.E.M.’s tenure), like The Baseball Project and The Minus 5. He formed the Filthy Friends with Corin Tucker (Sleater Kinney), Kurt Bloch (Fastbacks) and Scott McCaughey (Young Fresh Fellows). He paired with singer-songwriter Joseph Arthur as Arthur Buck and recently collaborated with ex-Auteur Luke Haines on a new album entitled Beat Poetry For Survivalists. If that wasn’t enough, he’s also been a session musician on myriad projects and worked as a producer for artists like Alejandro Escovedo, Eyelids and the Jayhawks.

In 2015, Peter and Scott McCaughey attended the Ice Station Vadso Festival in Norway. Along for the ride were Mike Mills, Dream Syndicate front-man Steve Wynn and legendary Led Zeppelin bassist John Paul Jones. It was there they caught a performance from Frode Stromstade and Arne Kjelsrud Mathisen from the band I Was A King.

I Was A King formed in Oslo, Norway, in 2006. Their sound was a sharp amalgam of Jangle, Power Pop and Shoegaze. Over the course of six albums, they won over high profile fans like Sufjan Stevens and Daniel Smith of Danielson Famile. Both Robyn Hitchcock and Norman Blake from Teenage Fanclub took turns producing their albums. Peter and Scott immediately clicked with Frode and Arne and decided to collaborate.

As The No Ones, the four-piece released the Sun Station EP in early 2017. They reconvened in Portland, Oregon in June and recorded their official full-length record in just five days. But the project was delayed when Scott suffered a stroke that November. Once he recovered, post-production was completed, and the release was timed to coincide with the 2020 edition of the Ice Station Vadso festival in late March. (Undoubtedly cancelled now, due to the worldwide pandemic).

Cheekily entitled The Great Lost No Ones Album, this long-player is sure to delight R.E.M. fans as well as connoisseurs of Punk, Psychedelic and Power Pop. It kicks into gear with the first single, “No One Falls.” Ringing guitars connect with whirring bass lines, ethereal keys and pummeling drums. Scott and Frode share vocal duties and their harmonies lock in on the chorus.

Although it was written a few years ago, the opening couplet feels ripped from the headlines; “If I last another hour without some better bitter news, blame the lack of all precaution/Cause the light has left the tunnel’s end, with no more options, save to let the darkness through.” The lyrics seem to be addressing the abyss of depression, but feel relevant to the ongoing fears that currently grip the world. The soaring guitars on the break offer a bit of respite and the song winds down with shards of squally feedback.

On the second single, “Straight Into The Bridge,” Peter executes a great fake-out, as the opening AOR-ish guitar chords seem to reference Lynyrd Skynyrd’s “Sweet Home Alabama,” (the listener almost expects an obligatory “Toin it up”). Quickly pivoting, the guitars become more guttural, as they strafe over growling bass lines and a kick-turn beat. The lyrics are a bit of a mixed bag, matching arid desert imagery with sketches of crass and curvaceous assassins. Still, it’s tempting to view lines like “The invasion is persuasive close one eye and you’ll die…” through the prism of our global crisis.

Both Peter and Scott cut their musical teeth during the era of Punk Rock. That shared lineage shines through on three tracks. “(Going Back To) Stockholm Syndrome” weds a blitzkrieg beat to search-and-destroy bass, flurries of fractious  guitars, pounding piano notes, icy keys and see-saw vocals. Lyrics limn the anxiety associated with being held prisoner who begins to trust and even empathizing with one’s captor. But what if that confinement is emotional, rather than physical? “This is my world and it feels like home, each night I creep in my own bed, you’re my world and when I am alone/The one thing I believe is you’ll come ‘round again, I’m going back to Stockholm Syndrome, you’re in my head.” The deft arrangement accelerates on the break, opening up the throttle, it hurtles toward a conclusion, collapsing in a heap.

“A Saucerful Of Nothing” juxtaposes thrashy guitars, marauding bass, dissonant piano chords and a whipcrack beat with a sweet chorus and spacey keys. Cryptic lyrics hint at religious wars, alien invasions and soldiers of fortune; “A swinger from the cosmos, composers decomposing…one fist on the shovel, flies shit on my knuckles, I’ll see you in Uzbekistan, where the axe needs a hand, needs a hand.”

Meanwhile, somewhere in midst of the melodic maelstrom that is “Sweet Home Mississippi,” lyrics lament progress at the expense of gentility and gracious living. Clangorous guitars, discordant piano and a cantilevered backbeat sort of undermine the decorous message. But nothing can sabotage the song’s jagged charm.

The best tracks here offer a combo-platter of styles. “Clementine” wraps spidery guitar riffs around tensile bass lines and an urgent backbeat. Drone-y synth colors wouldn’t seem out of place on a Flock Of Seagulls record. Is this the same Clementine that Huckleberry Hound rhapsodized about? Hard to tell, opaque lyrics urge her to “Kick the past behind” as ragged piano notes cascade on the instrumental coda.

“Cinnamon Roll Hair” is a finespun elegy to the late Carrie Fisher. Powered by wobbly acoustic guitar and contemplative dulcimer, the lyrics slyly reference her lifetime of celebrity; “She already wrote it down, so I will only paraphrase, when you’re famous by birthright, years go by in a daze..,” as well as her tumultuous romance with Paul Simon. “…All the hearts and all the bones,” before it quietly folds into “Dream Something Else.”

“Dream…” takes it’s musical cues from the Beatles and other British Invasion antecedents. Sitar-riffic guitars intertwine with sidewinding bass, windchime-y percussion and a dropped beat. Celestial “Ahhhs” bookend every verse. The sun-kissed arrangement belies lyrics that rage against fitful dreams and bouts of insomnia; “Cursing the darkness and despair, lower my eyes and roll my hand, only the headphones play the same rotting song/If I’m dreaming, can I please dream something else?” Sitar notes pair with guitars on the break and the result is suitably modal.

Finally, “Gone” is brittle and buzz-tastic. Distorto guitars wash over waspish electric riffs, gnarled bass lines and pile-driving rhythms. The lyrics pine for the bygone days of sentient leadership and take a not-so-subtle swipe at a certain, self-proclaimed stable genius in charge; “The city was empty, the city was proud, oh once great and glorious/Gone are the days and they’re never coming back, the leaders quit leading and had nothing to say, and by their own reasoning, gone are the days and they’re never coming back.”

Other interesting tracks include the sparkly chime of “All You Need Is Rain,” the somnambulant chill of “Sun Station Vadso” and the shimmery grace of “Too Blind To Believe.” The album closes with “Turn Again.”

Scott handled lead and backing vocals, along with bass, guitars and keyboards. Frode also provided lead vocals and played guitar. Peter stuck with 6 & 12 string electric/acoustic guitars and dulcimer, while Arne played drums, percussion and keys and added backing vocals. The No Ones were ably assisted on harmony vocals by a coterie of Indie Rock superstars, Andrew Rieger from Elf Power, Australian singer-songwriter Darren Hanlon, Scottish singer-songwriter Lucy Parnell, Patterson Hood from the Drive-By Truckers and Debbi Peterson from The Bangles.

Recently, the R.E.M. classic, “It’s The End Of The World As We Know It (And I Feel Fine)” leapfrogged back up the charts (for all the obvious reasons). The line “Offer me solutions, offer me alternatives and I decline” sounds tailor-made for the self-appointed “Wartime President.” As Influencers lick toilet seats, teenagers crowd Floridian beaches and toilet paper becomes more precious than gold, it’s easy to get caught up in the madness.

The Great Lost No Ones Album doesn’t promise to put it all into perspective, but it does provide a reprieve. What it does offer is trenchant lyrics anchored by protean melodies, powered by concise arrangements and inventive instrumentation. Sometimes that’s enough.