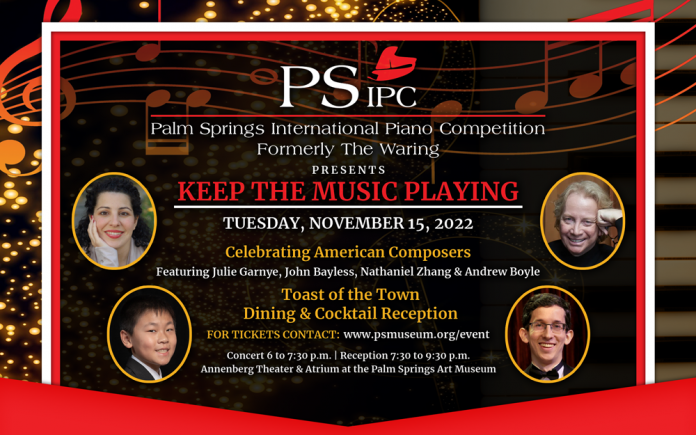 Founded on the College of the Desert Campus in 1983, the local piano conference that grew into an international competition is forging another milestone: New Name, New Artistic Director, and New Event! Going forward each division’s first place solo award will be known as The Virginia Waring First Place Award.  Virginia and her husband, Fred Waring, contributed greatly to the cultural landscape of the Coachella Valley, and this is one way of making sure her legacy and name live on. 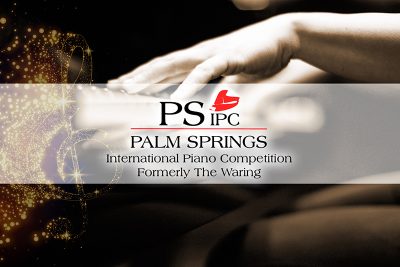 Renamed this past June, the Palm Springs International Piano Competition, formerly The Waring (aka PSIPC), is excited to announce its debut Fundraising Concert on Tuesday, November 15, 2022 at 6 PM at the Annenberg Theater, Palm Springs Art Museum. “We wanted to do something fun with a variety of music” said Event Co-Chair CJ Westrick-Bomar. “Besides featuring a young virtuoso teen winner, the program includes Platinum- selling cross over artist John Bayless, Broadway singer Julie Garnye, and two young competition artists,” Westrick continued.  Sandy Woodson added, “The evening’s focus is on American composers, including Irving Berlin, Leonard Bernstein, Hoagy Carmichael, Howard Arlen – Johnny Mercer, Samuel Barber, and Scott Joplin.  We want to give the audience what they didn’t know they wanted!”

VIP tickets that include Toast of the Town cocktails and dining reception in the Atrium of the Palm Springs Art Museum run $250 and $200.  Concert only tickets are $100.  Sponsorships with premier theater seating and reserved seating at the after party start at $1,000 and go up to $7,500.

Proceeds from the event will pay for student musical engagement assemblies and support the free competition rounds at the 2024 Junior and Intermediate International Piano Competitions.

The audience will thrill to not only former artistic director John Bayless’ artistry with “West Side Story” and on stage charisma, but will also be introduced to new artistic director Robert Koenig.  Koenig is a much sought-after collaborative pianist and chamber musician. He performs regularly in major centers throughout the world with many of this generation’s most renowned musicians. Recent engagements have included performances at Carnegie Hall in New York, The Kennedy Center in Washington, DC, Suntory Hall in Tokyo, The Concertgebuow in Amsterdam, and the Louvre Museum in Paris. He has performed with many of today’s leading artists including Sarah Chang, Hilary Hahn, Pamela Frank, Roberto Diaz, Elmar Oliveira, and Aaron Rosand. Koenig also served as a Staff Pianist at the Juilliard School for ten years and with the Curtis Institute of Music. “I had the pleasure of adjudicating at the 2022 Competition, and am looking forward to taking this competition to the next level, building on the great work that has gone on before.  It is an honor to be associated with this excellent organization,” Koenig said. Assisting Koenig are associate artistic director Dr. Joan RuBane and new board member Andrea Laguni, recently retired from the Los Angeles Chamber Orchestra, where he served as General Manager.

2019 Junior Solo and Concerto Winner Nathaniel Zhang will perform some Chopin; and 2022 Waring Artist Andrew Boyle will play Scott Joplin and the Nutcracker Suite. Garnye will perform selections from the great American Songbook.

New board president Joe Giarrusso enthusiastically looks forward to leading PSIPC into its new chapter, capitalizing on the world wide renown of the Palm Springs name and all that implies. “We expect the Palm Springs brand will gain us more competition applications, wider audiences with a broader scope of programming, and of course more donations,” he said. The current board of directors now boasts five residents of the city of Palm Springs.

March 20 sees the long awaited return of Three Pianos, Six Hands, to the McCallum Theatre, only with Variations! This popular show features John Bayless, Norman Krieger and Lisa Nakamichi performing duos and trios on three pianos, as well as a solo performance by 2022 Solo and Concerto Prize Winner Jonathan Mamora.  Mamora was born in Redlands, trained in San Bernardino and represents the best of the Inland Empire. The Competition is thrilled to finally have a “local” win, competing against pianists from Europe and the Far East.   This concert replaces an annual gala. Following the McCallum performance, there will be a VIP dinner at Wally’s. Concert only tickets are available through the McCallum Theatre box office, mccallumtheatre.com Concert sponsors include the City of Palm Desert and the Palm Springs Friends of the Philharmonic. Event chair is JoAnn Wellner.

Season sponsors include Eisenhower Health, Contour Dermatology, The Conte and Philibosian Foundations, and the late Peggy Cravens.  The season will end in New York at Weill-Carnegie Hall in New York City where Mamora will perform on May 4, 2023.  Thanks to Yamaha Artists Services, Mamora will also record a CD at Yamaha’s 57th Street studio.