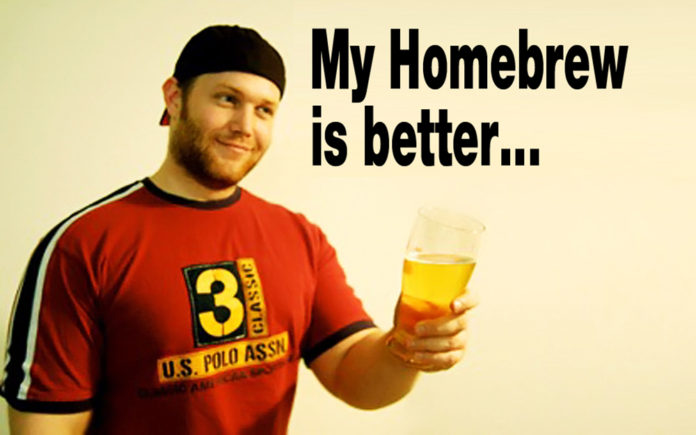 So, the other day at the brewery where I work, this couple sits at the bar and the guy asks the beertender what’s good and what’s new on tap. The couple orders a flight, and his girlfriend is very happy with the selection of beer she’s received. Not him though. For every beer she’d sip and enjoy, he’d then sip it and tell her why it wasn’t very good. Their biggest discrepancy came when they tried my Chardonnay oaked sour with black and blueberries. After exclaiming that she loved it, he took a sip, made a face, and explained (mansplained) to his girlfriend and the beertender what he felt the beer was lacking. “I homebrew my own sours, and I’ve just got this really picky palate,” he stated matter-of-factly to everyone around him, “I get that it’s hard for local breweries to make the kind of beer that I’m used to.”  I shook my head and laughed at his statement. I was a homebrewer as well. As was the brewery’s owner. As was almost everyone you will meet in the independent craft beer industry. I cringed at his statement, but only because I can remember being as pompously douchey as this guy was.

Taste is a subjective thing, what one person finds appealing, another may find repellant. This is never more obvious than in beer and music. Subcultures breed very strong views that tie emotion and a feeling of integrity with a sense of competition and one-upmanship; the biggest example being when a growing musical act or brewery gets accused of “selling out”. One of my favorite underground heavy-music bands, Pig Destroyer, just released their new album, and the elitist metal community was quick to lambast the band for adding a bassist and cleaner production values to their sound. “Boring,” “disappointing,” “their old stuff was better,” is the rallying cry from the vocal minority. When Firestone Walker debut their 805 Blonde Ale in 2012, I may have said all those exact same things about the Paso Robles brewery. I was just learning to brew my own IPA’s, and if I you were going to impress me, you had to do a hell of a lot better than some bland, fizzy, boring, basic-ass blonde ale like 805. Don’t even get me started about the time I visited Claremont Brewing Co.

I’d been home brewing for about a year and a half and had already racked up a half a dozen medals in small and local competitions. I was starting to get a bit of an ego, and I’d wonder why local breweries weren’t making the medjool-date and honey infused, oak-aged, English brown ales that I was making (and my ego said it was because they didn’t have muh skillzzz). A group of mine had rented a bus and did a brewery tour around the Inland Empire, and I spent most of that trip analyzing and criticizing everything I sampled. I was harshest on poor Claremont Brewing Co. I found fault in everything they had on tap, especially their stout, which I remember thinking tasted like straight soy sauce. By knocking the products created by businesses, I was letting everyone know I could do better in my garage. Homebrewers are imaginative and idealistic, but they’re not always realistic.

The marijuana gummi-bear stout that you made last year in your garage, the one your friends all went crazy for? I’d love a sip of it, but good luck trying to recreate that recipe along with the dozen others you’d oversee keeping on tap if you were in charge of your own brewery. Or maybe you’d be able to jam 110 pounds of gummi edibles into your brew kettle after all. My first job as a brewer was very educational, and it helped wipe away a lot of my pretentious home brewing expectations.

Creating 5-gallon batches in your kitchen or garage for yourself and your buddies to drink is one thing, having to create 350 gallons of a beer that people must be willing to pay $6 a glass for is a different story. And what people will be willing to pay for all depends on your location and the demography you’re serving. A brewery in Portland might be able to get away with brewing something so wild that an LA crowd might not go for it, and likewise, a beer that resonates with the Los Angeles craft beer scene may be too much for a more conservative beer drinking crowd like that of the Coachella Valley. That’s not to say that there aren’t dozens and dozens of craft beer aficionados out here that love a good pastry stout or sour IPA with lactose, but those beers aren’t what the basic, everyday drinkers crave. To brew beer for a living means serving your audience and a bulk of your audience will want a clean, balanced, easy-drinking beer that doesn’t challenge their palates too deeply. And that is exactly why Firestone Walker sells so much more of its 805 Blonde than it does its critically acclaimed Sucaba barrel-aged barleywine.

To my credit, Lord Homebrew (what I named him) who came and graced my brewery with his presence didn’t say I was a bad brewer. He simply let everyone know that his own homebrews were vastly superior in terms of complexity and flavor. And they very well may be! The joy of home brewing comes from being limited only by your imagination. I just received a text from work telling me that the black and blueberry sour sold out in less than 2 weeks of being on tap and it is officially gone. Although it didn’t meet his expectations of what a worthy sour should be, it did resonate with many other patrons, and they responded with their wallets. Like it or not, the goal of every good craft brewery should be to create a portfolio of beer that ranges the gamut from mass-appeal to bold and innovative. I didn’t understand that as a home brewer with something to prove, but as a professional who creates recipes to satisfy more than just myself and my buddies, I gained a respect for the 805 blonde ale that the Lord Homebrews of the world couldn’t possibly understand.