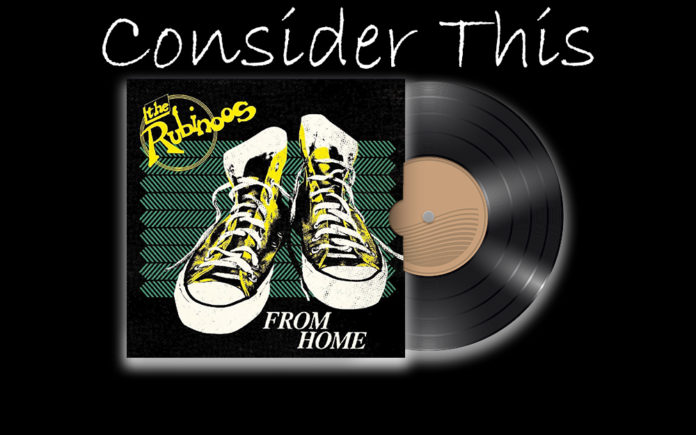 In the sixty plus years since Rock N’ Roll became a driving musical force, there have been myriad permutations, but none as potent and irresistible as Power Pop. The Beatles kinda-sorta invented it, Pete Townshend of The Who named and categorized it. By the late ‘60s, artists like Badfinger, the Raspberries, Big Star and Todd Rundgren were redefining it. By the end of the Me Decade, Power Pop experienced a renaissance via the success of chart-toppers like the Cars, (RIP Ric Ocasaek) Cheap Trick, Dwight Twilley, the Knack and the Romantics, as well as cult favorites like the Shoes, Robin Lane & The Chartbusters, the Nerves, the Records and 20/20. In the ensuing decades, the Power Pop torch has remained lit,  thanks to the efforts of Let’s Active, Marshall Crenshaw, Matthew Sweet, Teenage Fan Club, Fountains Of Wayne and most recently the Empty Hearts.

One band that was there from almost the beginning is the Rubinoos. Their origin story dates all the way back to the cover band Tommy Dunbar and Jon Rubin formed while attending Bay High School in Berkeley, California, circa 1970. As Jon Rubin And The Rubinoos they served up faithful renditions of hits by everyone from Little Eva to The Troggs. A couple of years later, they became serious about writing their own songs, so they recruited drummer Donn Spindt and bassist Tom Carpender, and shortened their name to The Rubinoos.

Luckily, the four-piece were allowed to woodshed and work out the kinks on the job, opening for Bay Area favorites, Earth Quake. It just so happened that Earth Quake’s guitarist, Robbie, was Tommy’s older brother. The band had released a couple of albums through A&M Records, but found the experience frustrating, so along with their manager, they founded Berserkley Records.

The Rubinoos’ first single, a taut reconfiguration of the DeFranco Family’s “Gorilla” song, was released in 1974 on a Berserkley compilation that also featured label-mates like Earth Quake, Greg Kihn and Proto-Punk progenitor Jonathan Richman. Not long after, they shared the stage with Jefferson Starship at Bill Graham’s Winterland Auditorium. Pretty quickly, their collective good looks were generating oohs & aahs as their “pix n fax” began gracing the pages of teen mags like Tiger Beat, 16! and Spec. In the run up to recording their first long-player, Tom left and was briefly replaced by Greg “Curly” Keranen and more lastingly, Royse Ader.

Their self-titled debut arrived in 1977, coinciding with the first rumblings of Punk Rock. They received positive reviews, and New York Rocker proclaimed it “The Best Pop Album Of The Decade.” Their version of Tommy James’ Pop nugget, “I Think We’re Alone Now” hit #45 on the Billboard Top 100, becoming the label’s first official hit. A year later their sophomore effort, “Back To The Drawing Board” featured the insta-classic “I Wanna Be Your Boyfriend.” The Rubinoos were feted in Great Britain, opening 56 U.S. dates for Elvis Costello’s “Armed Forces” tour.

The band turned a corner in the ‘80s. To paraphrase Led Zeppelin, good times, bad times, you know the Rubinoos had their share. First, Royse Adler left, replaced by Al Chen. Frustratingly, they worked on demos that never saw the light of day, so by 1982, both Donn and Al departed. Tommy and Jon soldiered on as The Rubinoos, relocated to Los Angeles and signed with Warner Brothers Records.

In L.A., they connected with Todd Rundgren. The Power Pop demi-god produced the pair’s mini-LP, Party Of Two, which arrived in 1983. The single “If I Had You” went into regular rotation on MTV. A year later they raised their profile by writing the theme song for the raunchy teen comedy, “Revenge Of The Nerds.” By 1985, they decided to take a break and pursue individual music projects.

A funny thing happened in the ‘90s, Power Pop made a resurgence, which culminated in festivals like International Pop Overthrow (IPO), dedicated exclusively to the classic ‘60s and ‘70s bands as well as current practitioners. Thanks to a couple of Rubinoos compilations, Basement Tapes and Garage Sale, the band was once again on the edge of the zeitgeist. As Y2K approached, Tommy, Jon, Donn and Al reconvened, recorded their third official long-player, Paleophonic and played the 1999 edition of the IPO festival.

For the past 20 years, the band has been going strong, continuing to regularly record and tour. All told, there has been five studio albums, two live offerings, a kids’ record, four compilations and an exhaustive box set. In 2007 they were back in the news when they discovered Avril Lavigne’s hit single “Girlfriend” was way too similar to their 1977 hit, “I Wanna Be Your Boyfriend”

It felt less that coincidental. Lawyers were summoned, and a confidential settlement was agreed upon. Avril’s people insisted she’d never heard the song, but Power Pop aficionados knew better. Recently, one of their most ardent fans, and an amazing musician in his own right, Chuck Prophet, expressed a desire to produce their newest songs.

Chuck made his bones as guitarist for Paisley Underground legends, Green On Red. He embarked on a solo career in 1987 and has recorded 14 solo albums, including his brilliant 2017 effort, Bobby Fuller Died For Your Sins. As a diehard Rubinoos fan, he seemed like the perfect choice to handle production chores on their latest collection of songs, From Home.

The album opens with the supersonic crunch of “Do You Remember.” Stinging guitars blast over rattletrap bass and a pounding beat. The lyrics offer a pocket history of the band and Rock N Roll in general, time-traveling back to the arly days of jamming in the basement and playing the Plaza, “Do you remember the De Franco Family B-side and the one from the Troggs?” A Psychedelic guitar on the break flanges and shudders. Meanwhile, Tommy and Jon’s still amazing choirboy harmonies shine on the bridge as they sweetly recall “Dance With Me, Henry,” the exuberant “answer” song (to “Work With Me Annie”), written by Johnny Otis and Otis Blackwell that was Etta James’ first hit.

That same rigorous attention to detail is applied to “Honey From The Honeycombs” a British Invasion-flavored groover that pays homage to Honey Lantree, the Beehive-coiffed drummer that authoritatively pounded the kit on the Honeycombs’ hit, “Have I The Right” back in 1964. Shang-a-lang guitars connect with tensile bass lines, and a pile-driving rhythm, as sun-kissed harmonies salute one of the first female drummers in Rock. The lyrics duly note “You got your Charlies and your Ringos, your Jazz guys and their bongos, but I’ll take Honey…the bass drum starts thumping gets my heart a-pumping deep inside/She’s up there on the bandstand, counting off the numbers, laying down the time.”

The best tracks manage the neat trick of feeling fresh and familiar at the same time. The vibe is caffeinated and jittery on “Miss Alternate Universe.” The urgent melody is powered by crashing drums, prowling bass lines, space-age synths and sinewy guitars. Smarty-pants lyrics celebrate the dubious charms of a irl with “Judy Jetson sex appeal,” but not much more to offer; “she’s a hurricane in reverse, Albert Einstein meets Patty Hearst.” Wiggly guitars on the break and winsome harmonies kind of soften the lyrics’ offhand misogyny.

“Phaedra” takes the opposite tack, a sincere encomium to the reckless Greek Goddess. Yearning and expansive, it blends angular guitars, supple bass, shimmering mellotron and propulsive beat. Tart double extenders like “I need a goddess of love to come down here and release me/Don’t need no greasy kid stuff, no, no, no, I’ll be your king and you’ll be my queen,” Give the ancient Greek myth a 21st century twist.

Over whiplash guitars, rubbery bass and a breakneck beat, “How Fast” weds a ricochet melody to jabberwocky lyrics that feel like a veiled commentary on the vagaries of love; “Take a letter to the capitol, put it in the governor’s hands, spend a month of Sundays swinging from a ceiling fan/On a Shetland pony in a jet black robe, how fast does this thing go?” On the break guitars cascade and cantilever, burnished one minute and muscular the next.

Finally, “Rocking In Spain” is equally swaggering and shambolic. An irresistibly hook-filled melody is anchored by a tom-tom heavy rhythm, hand-claps, slingshot bass lines and Glam-tastic guitar. The lyrics acknowledge The Rubinoos’ overseas superstar status and slyly references the Kings of Punk; “We’re going to the place where Rock and Roll’s alive and well, we’re going to the place where the fascists and the dictators fell/Punks and petty criminals mix it up to make the scene, Johnny, Joey, Dee Dee, Tommy bringing in a new regime.”

The action slows on a couple tracks, “Heart For Sale,” and “Masochist Davey.” The former matches chiming acoustic riffs to sun-dappled harmonies. The willowy melody is steeped in heartache as lyrics deftly adds a new item to Craigslist; “Heart for sale, drive it away today, you can take it for a spin, you might just fall in love again/Heart for sale, nothing but highway miles, once you get behind the wheel you’re going to come alive.”

The lyrics on the latter are slightly more subversive. As ticklish electric guitar crests over sinuous bass lines, percolating congas and a tambourine shake, the Rubinoos weigh in with some dating advice that’s shifts from salacious to sagacious; “It’s about time you learned how he got his name, he don’t want your affection unless it’s wrapped up in a little pain/You’ve been sweet and nice but throw it in reverse, ‘cause nice girls never finish first.”

Other interesting tracks include the sleek style of “Do I Love You,” and the chilly shimmer of “January.” If Buddy Holly, Marshall Crenshaw and Joe Jackson had ever collaborated on a song, it might sound something like “Pretty Close.” The album closes with the cocktail Tropicalia of “Watching The Sun.” It’s suffused with stacked harmonies, swaying guitars and a rippling bongo beat. The melody shares some musical DNA with the Beatles’ “And I Love Her” and (incongruously), America’s “Sister Golden Hair.” It’s a quiescent end to a great record.

Chuck Prophet’s production is clean and crisp. He smartly steps aside and lets the band’s stellar songcraft speak for itself. Nearly 50 years on The Rubinoos are still making classic music that still seems cutting edge. From Home continues that tradition.