If you came of age in the late ‘80s and preferred Punk over Top 40, the only place to find new music was on MTV’s “120 Minutes” program. For two hours every Sunday night the music television channel corralled all the outlier artists that, apparently, seemed too exotic for regular airplay.

It was kind of a form of musical segregation, but for aficionados of Punk, Post-Punk, New Wave, No Wave and Alternative, it meant they could safely enjoy the sights and sounds of a Pixies video knowing it wouldn’t be followed by some mainstream shite like Poison or Paula Abdul. (That sort of jarring juxtaposition can cause musical P.T.S.D.)

“120 Minutes” played left of the dial artists like the Blake Babies, Cocteau Twins, Robyn Hitchcock, Jane’s Addiction, Lemonheads, Stone Roses and the Sugarcubes. This is where most people discovered the Sneetches.

Mike Levy and Matt Carges had both cycled through a series of Bay Area Punk bands when they formed the Sneetches in San Francisco in 1985. Named after Dr. Seuss book that subtly taught the philosophy of tolerance, the Sneetches ditched the nervous angst of Punk and concentrated on a sweeter style that reflected their love for ‘60s bands like the Monochrome Set, Easybeats and the Zombies.

Mike and Matt employed the D.I.Y. approach to recording, initially the duo played everything themselves. Ex-Cortinas drummer Daniel Swan joined the fold in 1986, (the British Punk band had an almost hit in 1979 with the single, “Fascist Dictator). As a trio they recorded their full-length debut, Lights Out With The Sneetches in 1987.

The following year they released their gorgeous sophomore effort, Sometimes That’s All We Have and recruited another Brit, bassist Alec Paleo. Itfelt like all the puzzle pieces were coming together. They played a series West Coast dates opening for the moody Shoegaze band My Bloody Valentine. Their videos began to receive some airplay on “120 Minutes,” giving them national exposure. In 1989 they undertook an arduous nationwide tour that ended at New York’s infamous CBGB club.

1990 saw the release of Slow their first long-player as a four-piece. Tours of France and Japan followed, they also managed to collaborate with heroes like Chris Wilson of the Flamin’ Groovies and Power Pop progenitors the Shoes. Blow Out The Sun arrived in 1994, and not long after that the band quietly called it quits.

The split was never acrimonious, it just seemed like time to move on, but the break-up hit their fans pretty hard. In less than 10 the Sneetches managed to record a surfeit of material:  four studio albums, three EPs and a couple of odds n’ sods compilations, all on tiny labels like Kaleidescope, Alias, spinART and Bus Stop.  Luckily, the fine folks at Omnivore Recordings have curated a 22-song career defining compilation, Form Of Play: A Retrospective. 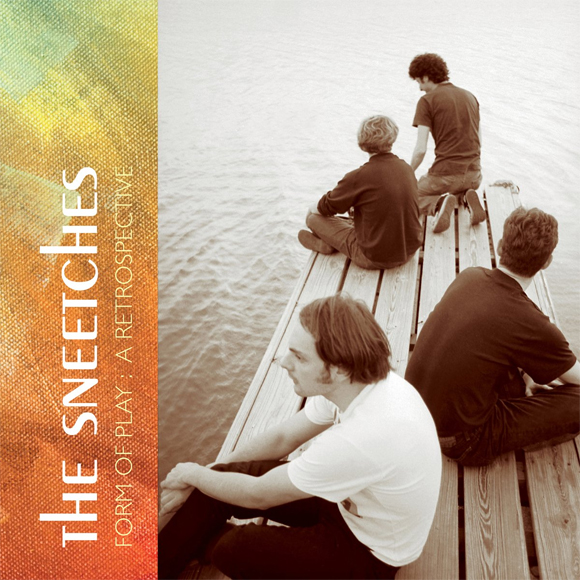 The album opens with the gangly “Over ‘Round Each Other.” Something of an existential nursery rhyme, it blends angular, sci-fi guitar, plonky piano, akimbo handclaps and sunshiny harmonies. It offers an exhilarating hint of the aural delights to come.

“Over…” was extracted from the Slow album, along with four other cuts. If the Partridge Family ever collaborated with Gang Of Four and Tower Of Power, it might sound like “Voices In My Head.” Shards of guitar collide with stentorian horns, lush keys, hopscotch rhythms and Mike Levy’s boyish tenor. Jabberwocky lyrics try and quell the inner voices that result in impulsive behavior.

Splattery organ notes, rumbling bass, chunky power chords and a pummeling backbeat propels the go-for- Baroque arrangement of “What’s In Your Mind.” The lyrics puzzle the interior workings of an airy ingénue. “She has the neatest smile but underneath it all there is only a child/A mirrored face that gleams with sort of cellophane eyes, cracking at the seams.” Prickly guitar, swirling harpsichord and dissonant piano ratchets up the intrigue on the instrumental break.

On “Wish You Would” shimmery guitar floats over Entwistle-style bass lines and a taut martial cadence. Here a tongue-tied suitor tries to get past his shyness; “Thinking of ways to say something to you, but I do nothing instead.” Meanwhile, “Let Us Go” folds feathery acoustic filigrees into layered harmonies and brushed percussion. Off-kilter bongo rhythms accent the lyrics’ cryptic equivocation; “Where are your tears, where have they gone/What have we become there’s no turning back now.”

Four songs crop up from Sometimes That’s All We Have. A finger-snappin’ rhythm is supplanted by a clip-clop gait on “Don’t Look Back.” Carnival keys, high lonesome harmonica and smoky pedal steel wrap around languid harmonies that recall “Pet Sound” era Beach Boys.

The horns return on the wildly ambitious “Unusual Sounds.” Kaleidoscopic acoustic guitar lattices over honeyed harmonies, kinetic drums and plangent keys. The melody has an old fashioned, almost vaudevillian quality. As it builds to a frenzied crescendo on the bridge, Punky electric riffs joust with skronky sax.

Three songs pop up from Blow Out The Sun. Opening with a shimmery organ wash and moody vocals, “What I Know” quickly shapeshifts, accelerating on the chorus, adding crunchy Power Pop riffs . Downcast harmonies are front and center on the evocative ballad “Behind The Shadow.” Glimmers of hope peak through the clouds on the pensive “A Good Thing.” Here, the descending piano notes, plinky vibraphone and plucked Spanish guitar echo Brian Wilson’s early sonic experimentation.

Form Of Play is dotted with obscure gems like the jangle pop of “…And I’m Thinking,” the percolating “Only For A Moment” and the sun-dappled “Juliana Why.” Three live tracks confirm the Sneetches were as compelling on stage as they were in the studio. “Heloise” weds strafing power chords to a sideways Bossa Nova beat. ”The Weather Scene” is equal parts stompy and hypnotic and “A Light On Above” crackles with intensity.

Other interesting tracks include the ethereal lullaby “They Keep Me Running” and “Looking For Something” which is frenetic and surprisingly Punktastic. The album closes with the dreamy “How Does It Feel.” A previously unreleased demo, that (no surprise), sounds as assured as their more polished efforts.

The only thing missing is the sublime title track from Sometimes That’s All We Have. But, to paraphrase the Stones, you can’t get all the Sneetches you want, but with Form Of Play, you get what you need.

This is a nearly flawless introduction, a perfect addition for anyone who’s worn out their Big Star and Left Banke records. The Sneetches may have never topped the charts, but their quiescent charms continue to resonate.