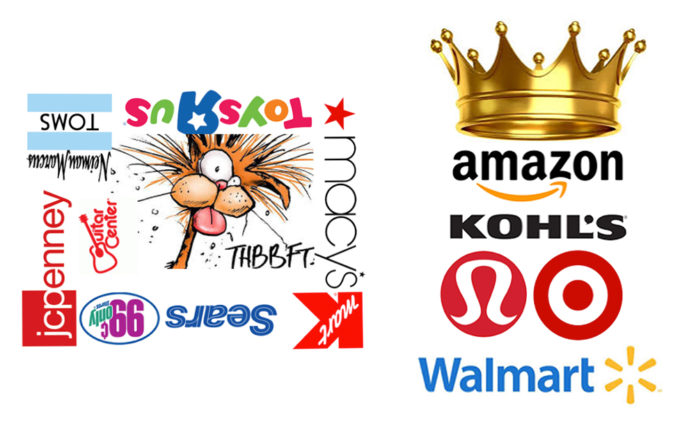 According to the National Retail Association, this holiday season saw the strongest retail sales growth since 2011, up 5.5%.  Online sales were up 11% while traditional brick and mortar sales were up 5%.

Sarah Quinlan of MasterCard states that most people continued to avoid conspicuous consumption while opting to spend on their homes.

According to First Data, grocery stores saw the greatest year-over-year increases in sales in December, up 6.3%.  Shoes came in second, up 4.5% while discounters, luxury goods and electronics all saw sales growth.  Meanwhile, clothiers were down 1% with department stores off a worrisome 6.6%.

Amongst brick and mortar stores, Kohl’s posted some of the strongest results with sales up nearly 7%.  What makes this particularly interesting is that Kohl’s has eschewed indoor shopping malls for standalone buildings.

Other brick and mortar retailers that had strong holiday seasons included Target, Lululemon and American Eagle.

JC Penney posted a 3.4% increase due to strength in fine jewelry (who knew that they had such things), home decorations and shoes.

Struggling retailer, Macy’s touted 1% sales growth as evidence that their demise is anything but inevitable.  At the same time, they announced the sale of their landmark building in Union Square in San Francisco.

Zombie stores, Sears and Kmart, saw sales decline by 16%.  It is estimated that Sears will lose between $200 and $320 million for the fourth quarter of 2017.

In addition to Toys R Us, a number of well-known retailers filed for bankruptcy protection in 2017 including The Limited, Radio Shack, Vitamin World, Perfumania, Gymboree, Rue21, Payless Shoes, BCBG, Wet Seal, Aerosoles, True Religion and Papaya (the store, not the fruit).

For comparison, at the height of the Great Recession of 2008, one in six of retail or apparel companies were considered to be at risk of default on their debts.  At the end of 2017, the situation was worse with nearly one in five retailers at significant risk of bankruptcy.

Among those in trouble are Neiman Marcus due to $6 billion of debt place on the company in 2013 when a hedge fund and a Canadian public pension fund bought the company.  The company has hired a ‘strategic advisor’ to determine what to do next suggesting that the company will be sold, if possible.

While some luxury retailers like Neiman Marcus are struggling, so too are the 99 Cent Only stores.  Like Neiman Marcus, this company was bought by a hedge fund and Canadian private pension fund in 2012.  Over the last five years, the company has had five CEOs and five CFOs.  Between the debt and a lack of effective management, the company is struggling to survive.

While Vitamin World has already filed for bankruptcy, their largest competitor, GNC, struggled under a hefty debt load, shrinking profit margins and too many physical locations.

Guitar Center is another well-known brand at risk of failure as they have 18 months to refinance nearly $1 billion in debt while fighting coping with declining sales volumes.

While Amazon may be considered ‘The Death Star’ to many customer-facing businesses, Amazon alone is not the reason why many of these companies are struggling.  Consumer tastes are fickle and retailers must continue to reinvent themselves every day.  When ownership groups place too much debt on their businesses, it should be no surprise that those businesses are unable to effectively compete in a rapidly changing consumer marketplace.

Haddon Libby is the Managing Partner of Winslow Drake Investment Management and can be reached at 760.449.6349 or HLibby@WinslowDrake.com.  For more information, please visit www.WinslowDrake.com.